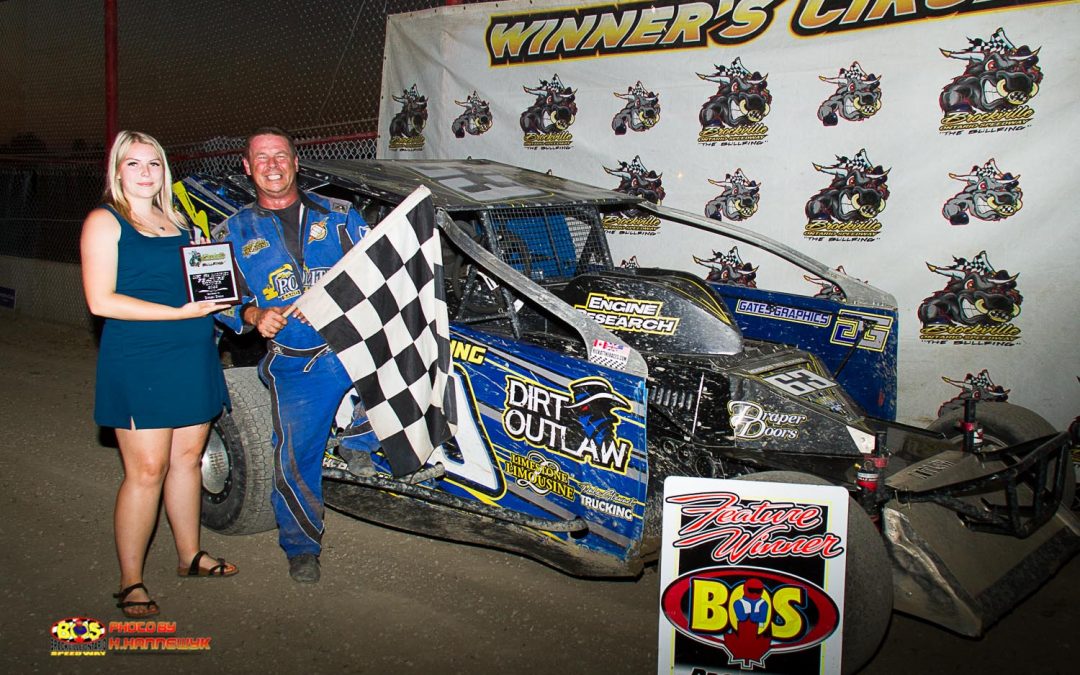 Temperatures were hot this past weekend at the Brockville Ontario Speedway. With warm temperatures it meant the racing action was very intense and much like a week ago, fans were treated to exciting finishes and yet another first-time winner.

The DIRTcar Sportsman 25 lap feature saw Josh Powers, former Vintage Modified driver, take the lead at the drop of the green flag over Tyler Stewart and Greg Brinklow. Powers has had great runs all season but was looking for something good to happen finally on this night. Powers held a comfortable lead but battled some handling issues, which allowed Tyler Stewart to close the gap. A late caution would stack the field up for a restart, which was what Stewart and Brinklow were looking for. When the green flew Powers was in control but Stewart tried several times to get by as Brinklow was under attack from Ricky Thompson and Bobby Herrington. Stewart would close to within a car length but on this night, but it was Josh Powers, finally scoring his first career DIRTcar Sportsman win. Stewart held on for a career best second over Bobby Herrington and Xavier Andrews, while Ricky Thompson got by Greg Brinklow at the line to finish fifth.

In DIRTcar 358 Modified action, veteran Jeff Sykes has called Brockville his Saturday night home for 2022 and was looking to return to the winner’s circle after many years away, as he jumped to the lead over Terry McClelland and Tristan Draper. Sykes was using his experience at the speedway and opened up a very comfortable lead by nearly a straightaway as McClelland and Draper tried to keep pace. Meanwhile another veteran, Chris Herbison was on the charge as he moved to the top three getting by McClelland for 3rd and then cleared Draper for 2nd. Sykes held a half straightaway lead but Herbison was driving hard and caught Sykes with 4 to go. On lap 27 Herbison would use the bottom in turn 2 and take over the lead after a great battle with Jeff Sykes. In the end it was Chris Herbison taking his first win since August 17th of 2019 at Brockville. Sykes would claim second over Joe Banks, Chris Raabe and Tristan Draper.

The Street Stocks saw a thrilling finish in their 15 lap feature event. Brett Horner was looking to claim his 2nd of the season after winning the season opener on May 14th. Horner led the way with veterans Todd Raabe and Steve Billing giving chase. Horner and Raabe were able to put some distance on the field and have their own spirited battle for the top spot. On lap 12 a yellow flew as Sylvain Gauthier and Keith Riddell tangled in turns 1 and 2. On the final restart Todd Raabe, who usually loves the inside lane at “The BOS”, would take the outside groove in turn 4, as he drove by Horner for the lead. Todd Raabe would go uncontested from there to win his 2nd feature in a row over Brett Horner and Steve Billings.

Jordan Wood led early at the start of the 15-lap novice Sportsman feature but the action was behind him. Points leader Sandy MacFarlane had problems in turn two and tangled with Nathan Lambert on lap 3. Then on lap 6 Paul Donnelly had issues in turn, which ended with his car going to the pits on the hook. When the race got going Jordan Wood paced the field comfortably, but Holly Denard was closing fast and looking to get her first ever win. On lap 8 Shawn Hodge would see a good finish go away as he broke in turn 4. On the final restart Holly Denard would make it close but Jordan Wood would drive on to victory lane, his 2nd win in 3 weeks. Denard settled for 2nd with Gavin MacFarlane charging to third at the checkers.

In 1000 Islands RV Crate Sprint car action it was a caution free 15 lap feature event. Quebec driver Mathieu Bardier would jump to the lead at the start of the race and pull away from the field. With the race going caution free 2nd place Lee Ladouceur and third place Ryan Poole could do nothing about it, as Mathieu Bardier would claim his first Brockville win. Lee Ladouceur, Ryan Poole, Luke Stewart and Tim Bailey completed the field.

Next week Rycon Electrical will be on hand for a full program with the Supernant Truckshop Mini Stocks back on the card. Racing gets underway at 7pm. For further information check out our website at brockvillespeedway.com or give the track a follow-on Facebook, Twitter and Instagram. 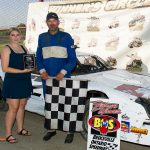 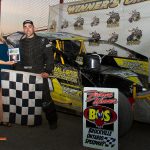 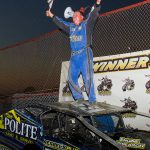 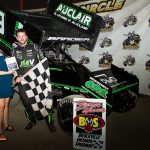 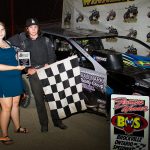 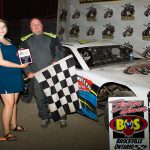 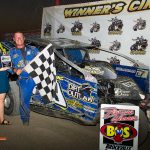