Herrington and Cyr Double up while Williamson, Raabe and Cook claim season firsts at Brockville 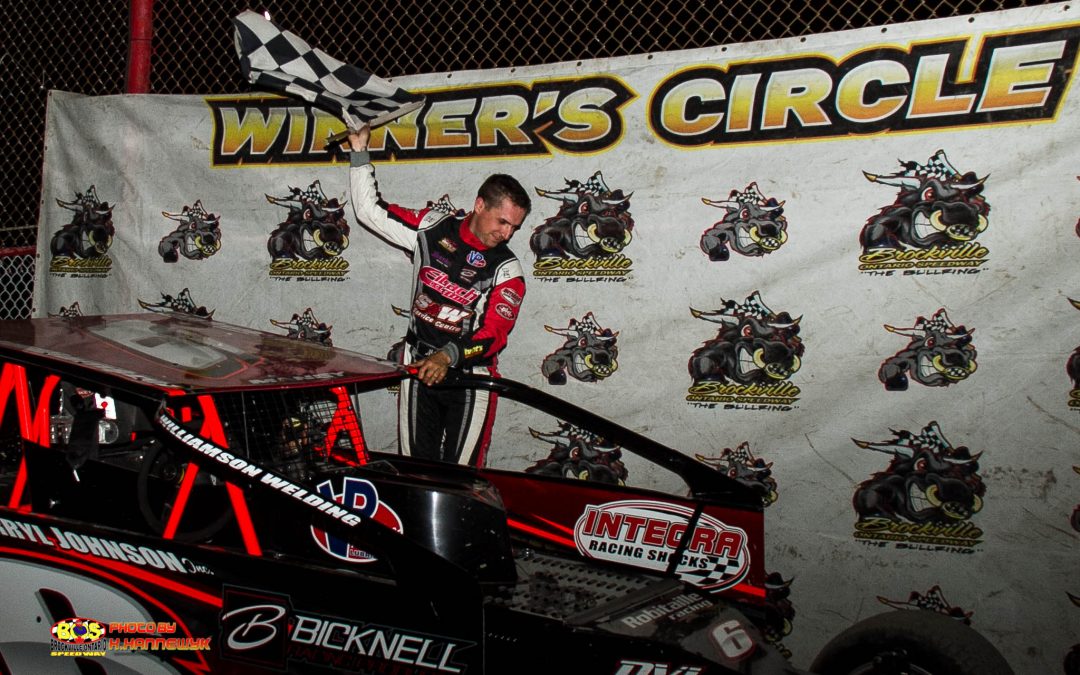 Another perfect night for racing as Superior Cellular and Sound was on hand for the evenings action and the fans were treated to some exciting racing all night long.

Ryan Arbuthnot took the lead from the pole at the start of the 30 lap J and J Automotive 358 Modified feature, over Kyle Dingwall Mat Williamson Corbin Millar and Brian McDonald. Arbuthnot had one of the fastest cars in the early laps as he pulled away from the battle for second between Dingwall and Williamson. By lap 10 Arbuthnot was into lapped traffic which would cause some tense moments for the leader and was just what Williamson was looking to have happen, as he tried his best to run down the leader. Williamson would get to the back bumper of Arbuthnot in traffic, but the yellow flew on lap 11 for Corbin Millar, who hit an infield tire in turn 2. He would return to finish 11th. When the green flew it was clear that Williamson and Arbuthnot were going to settle the race between them as the two drivers raced hard and even exchanged some paint at times. On lap 17 a costly mistake occurred as Arbuthnot slipped wide in turn 4, which allowed Williamson to take over the lead with Dingwall, Brian McDonald and 358 Modified Rookie Johnathon Ferguson completing the top 5. Williamson was looking to run away and hide but Chris Raabe slowed in turn 3 and the yellow flew, which bunched the field up for the final restart. When the green flew Williamson had saved his stuff for when it counted and despite the efforts of Ryan Arbuthnot, it was not meant to be. Mat Williamson would back his Friday night win at Ransomville up with his first win of 2021 in his first start of the year. Arbuthnot was able to hold on to 2nd while Gary Lindberg came from deep in the field to edge out Brian McDonald for third with Johnathon Ferguson rounding out the top 5.

The 25 lap J and J Automotive Sportsman division saw great racing a week ago and, on this night, it was no different. Jessica Power had a dominant performance in her heat and was determined to do the same in the feature as she took the lead away from pole sitter Jarrett Herbison, with Bobby Herrington, Gabriel Cyr and Ricky Thompson completing the top 5. Power was fast at the start of the event and would lead the opening 7 laps but the driver on the move early on was third place starter Bobby Herrington. On lap 7 Herrington got to second and was putting the pressure on Power for the lead. On lap 8 Herrington would use the outside groove to get by in turn 4 and begin to author a dominant performance like he did one week ago. On lap 9 Dale Gifford would collect and infield tire in turn one bringing out the yellow, which also resulted in a flat time. On the restart Herrington worked the bottom perfectly to take the lead but last weeks runner up Dylan Kirkland was charging hard on the topside as he closed in on the top 2 drivers. Kirkland made a bid for 2nd in turn 3 on lap 13 but slid too high in turn 4 which allowed Gabriel Cyr to get back by, while Jarrett Herbison completed the top 5. Herrington was the dominant driver all race long and despite the effort from 2nd place driver Jessica Power, Bobby Herrington was too strong as has he claimed his 2nd in a row in the J an J Automotive Sportsman division and third straight win dating back to Cornwall on June 27th. Jessica Power finished 2nd and claimed her 8th straight top 5 finish dating back to July of 2020. Dylan Kirkland, Gabriel Cyr and Jarrett Herbison filled out the top 5.

In the 15 lap Novice Sportsman feature it was Elgin Ontario’s Brennan Moore taking the lead with Justin Cyr and Eric Loyer completing the top 3 drivers early on. Moore had a great car but Justin Cyr was looking to keep up with his winning ways as he chased after Moore for the lead in the opening laps. On lap 4 Cyr made his move to the lead and was the dominant force. It appeared Justin Cyr was going to driver away to and easy win, but Kiera Turner would break the front end in turn 3 ending her first night in the division. On the final restart it was no contest as Justin Cyr would go unchallenged to claim his 2nd straight Novice Sportsman win at Brockville. Eric Loyer crossed in third Jordan Wood 4th. Blayden Arquette backed up his win at Mohawk on Friday night, with a 5th place finish.

The Street Stock 15 lap event saw excitement right from the beginning as Adam Switzer would lose the motor in his ride, which caused some extensive track clean up before the field went back to green. When the green flew, opening day winner Brock Cullen would lead the way but Todd Raabe was on the charge and would take the lead away on lap 4. From this point forward Brock Cullen and Keith Riddell could do nothing with the leader, as Todd Raabe claimed his first win in his first start of 2021. Cullen crossed in 2nd ahead of Keith Riddell and Bob Williams.

The 15 lap Mini Stock feature was exciting from the opening green flag as Jarrod Galway lead early on over Dan Cook, Frank Belair Hayden Brown and Tyson Slinger. Galway appeared to be well on his way to the feature win but a lap 7 restart saw something totally different. Dan Cook was able to put his car out in front on lap 7, but the racing was far from over. As the laps clicked off Dan Cook and Hayden Brown were making it difficult for Cook, to stay in front and the battle was on. On the final lap heading to the checkered flag Galway made hard contact with Cook but Dan Cook was not going to be denied as he charged to his first ever win in the Mini Stock division at Brockville. Galway held on for 2nd with Hayden Brown, Tyson Slinger and Frank Belair completed the top 5 finishers.

Next week the J an J Automotive 358 Modified and Sportsman divisions will be on card along with Novice Sportsman, Mini Stock and Street Stock. It will also be the return of the 1000 Islands RV Crate Sprint cars for their 2nd event of the season. To pre-book your tickets, head to the schedule portion of our website at brockvillespeedway.com or for immediate updates, you can check out our Facebook, Twitter and Instagram, pages. 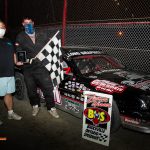 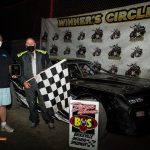 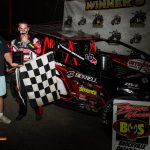 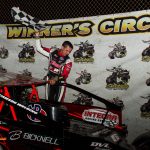 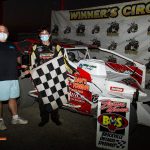 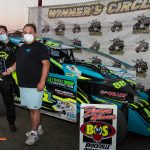