Herrington Hustles To Checkers At Brockville 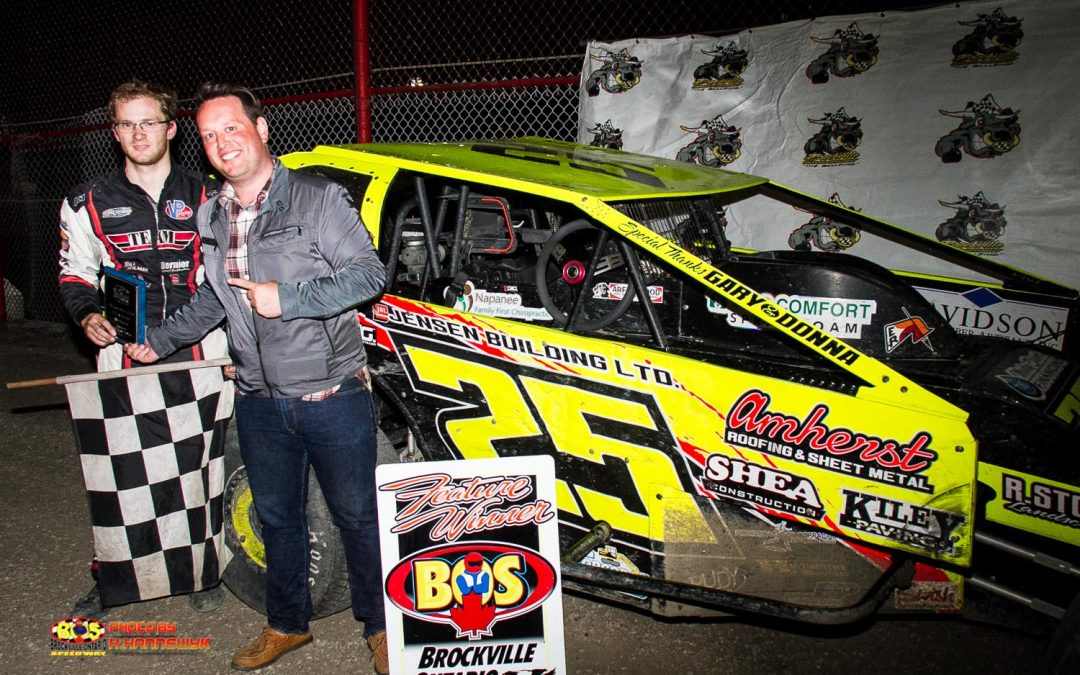 BROCKVILLE, ONT – A huge night this past Saturday night at the Brockville Ontario Speedway as champions were crowned after a great season of racing. Bobby Herrington won the battle as he claimed his 2nd 358 Modified win of the year while Luke Whitteker claimed the 2017 championship. In the 23 lap 1000 Islands RV Tri-Track Challenge event Luke Whitteker made some key adjustments and held off Danny O’Brien to claim the special all star race. Ryan Scott notched his 5th Sportsman win of the season but Dylan Evoy claimed the championship with a 4th place finish, Dave McDonald held off a tough field for his 3rd Rookie Sportsman win with Alex Gagnon claiming the title after a 2nd place effort, Peter Raabe was the winner in Street Stock while Tyler Bushey scored the championship, Joe McNichols won his first Mini Stock feature of the year but it was Dylan Kirkland taking the championship and Josh Powers finally got to victory lane in Outlaw Vintage with Brian Comeau taking the Outlaw Vintage title back to Toledo.

Stephane Lafrance was the dominant force in the opening laps as he charged away with the lead over Brian Rogers, Madison Mulder, Tim O’Brien and Bobby Herrington. It didn’t take long for the first caution to fly as Steve Bilow and Steve Morris came together in turn 2, both drivers were able to continue on. On the restart Lafrance continued to lead but the man on the move was Bobby Herrington. After restarting 4th he moved to 2nd and quickly ran down the race leader. On lap 14 Herrington finally took over the lead and began to put on a driving clinic as he pulled away to nearly a straight away advantage over Lafrance, Rogers, Chris Herbison and Kyle Dingwall. On lap 16 a 3 car tangle in turn 3 involving Jeremy LaSalle, Brian McDonald and Joe Banks brought out the yellow which helped Luke Whitteker as he needed to finish 10th or better to lock up the championship. On the restart Herrington continued his great run and doing what he had to do to claim a track title. As the laps wound down the action picked up other drivers were charging forward, Kyle Dingwall was on the charge to the front and Danny O’Brien was on his way as well as they moved into the top 5 with 6 to go. On lap 24 Tim O’Brien saw a top 5 run go away as he made contact with an infield tire in turn 2. On the final restart Bobby Herrington charged away but Danny O’Brien was making a late charge as he went 3 wide with Lafrance and Herbison to move into 2nd and the chase was on. At the finish Bobby Herrington was the class of the field claiming his 2nd win of the year with Danny O’Brien claiming 2nd by inches over Chris Herbison Stephane Lafrance and Brian Rogers. With a 7th place finish Luke Whitteker would be crowned the 2017 champion.

In the 1000 Islands RV Tri-Track Challenge for the 358 Modifieds Luke Whitteker had a better view as he started on the pole and lead early on over Danny O’Brien, Kyle Dingwall Bobby Herrington and Corey Wheeler. On lap 7 the first yellow flew as Brian McDonald’s tough night continued as he slid off the top side of turn 2. When the green came out Danny O’Brien made a charge for the lead but the 2017 champion Whitteker was up to the challenge as he held off the veteran with Kyle Dingwall right there with these 2 drivers in 3rd. The Doctor Danny Johnson was making a rare Saturday night appearance at Brockville. After struggling in the regular feature he started 9th in this event and quickly charged to the top 5 taking 4th from Bobby Herrington and tried at will to run down the top 3. As the laps clicked off Luke Whitteker was in a battle as Danny O’Brien tried the inside and outside all race long but was not able to complete the pass. In the end Luke Whitteker had a career night claiming the 1000 Islands RV Tri-Track Challenge to go along with his championship effort. Danny O’Brien, Kyle Dingwall, Danny Johnson and Bobby Herrington completed the top 5.

In Sportsman action Dylan Evoy just needed a solid run to take his 3rd Sportsman title but Ryan Scott was looking to score win number 5 on the year and he did that by taking the lead on lap 5 with Jesse Hudson, Xavier Andrews, Dylan Evoy and Tristan Draper. Ryan Scott was dominant during the opening 10 laps until the caution flew for Chris Ferguson who spun on the front stretch. On the restart Ryan Scott would take over the lead but behind him Tristan Draper found something on the outside lane as he charged from 4th to 2nd and was on the charge for the leader. At the halfway point Scott was clearly the dominant car with Draper a straight away back in 2nd while Jesse Hudson and Dylan Evoy were having a spirited battle for the 3rd spot while Johnathon Ferguson, the newly crowned Mohawk Sportsman champion, completed the top 5. As the laps wound down it was clear that Ryan Scott was not going to be beat as he put on a dominant performance to score his division leading 5th win of the season over Draper, Hudson, Evoy and Ferguson. After his 4th place finish Dylan Evoy joins Randy Gaudet and Shane Pecore as the only 3 time Sportsman champions at Brockville.

The Rookie Sportsman saw several early cautions but once the laps clicked off Dave McDonald was the driver in charge over Alex Gagnon and Joey Paquette. Gagnon came into the night as the points leader and was looking to sew up his first Sportsman title. With a slick race Dave McDonald was taking his time and doing this was the fastest car on track as Gagnon and Paquette were doing all they could to run him down. I the closing laps Dave McDonald was be the dominant driver as he scored his 3rd win of the season. Alex Gagnon crossed in 2nd which was more than enough to claim the championship with Dale Gifford taking hom the 3rd spot at the finish.

In the Outlaw Vintage division Brian Comeau had already locked up the 2017 championship but Josh Powers wasn’t concerned with a title he wanted the feature win. Powers would charge to the lead early on and have his way with the field. Cory Winters was looking to score his 2nd Brockville win of 2017 but Brian Comeau was making it tough o him throughout the 15 lap event. In the end nobody was catching Josh Powers as he finally scored his first win of the season with Cory Winters 2nd, Brian Comeau the 2017 champion would cross in 3rd with Matt Barbour and Ryan Comeau rounded out the top 5.

The Street Stock class saw Tyler Bushey needing to start the feature to join his dad Roger as a Street Stock champion at Brockville and that proved to be no issue. In the feature Steve Brady was looking to score his first ever win as he led the opening 7 laps with Peter Raabe, Todd Raabe, Keith Riddell and Tyler Bushey completing the top 5. On lap 8 Brady had his hands full as Peter Raabe was able to slip to the inside and take over the top spot bringing his brother Todd to 2nd setting up a classic family battle for the win. On lap 10 the caution would wave for Sheldon Hoogwerf who lost a motor in turn 2. On the final restart Peter Raabe would hold his brother at bay and despite a last lap charge on the top side, Peter Raabe would drive on to his first win of the season over Todd Raabe, Tyler Bushey would celebrate his 1st championship with a 3rd place effort while Steve Brady and Keith Riddell completed the top 5.

The Mini Stock event saw Kurtis Daye lead early on and was getting some pressure from Chris Bakker and Joe McNichols. Daye was running well and looking for his 2nd win of the year but on lap 7 things took a terrible turn. Off turn 4 Chris Bakker clipped an infield tired sending him spinning to the inside of the front stretch. Bakker’s car then rolled back across the track and was hit in the driver’s door by Jeff Bode who was battling for position at the time and the red flag was out. Jeff Bode would need assistance from his car to the ambulance, Chris Bakker was taken from his car and taken to local hospital but was communicating with track crews and the ambulance crew. When the race restarted Dustin Bode took over the lead and even though the track title was out of the equation he was in search of his 6th win on the year. Joe McNichols would put the pressure on and on lap 13 would take the lead away. Over the final laps Joe McNichols was the class of the field as he charged to his 1st win of the season. Bode would cross in 2nd with Cornwall regular Karl Potvin 3rd, with Kurtis Daye and Dylan Kirkland crossing in 5th which was enough to score the Mini Stock championship.

The 2017 regular season is now complete, track champions are crowned but the action is not done as the annual Monster Mud Enduro is set to take place featuring 4 and 8 cylinder events, Minivan and a ladies race as well. Racing gets underway at 1pm on Sunday September 17th. 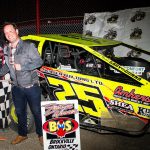 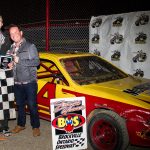 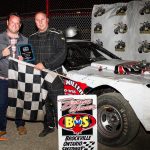 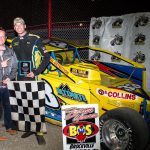 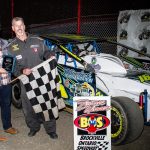 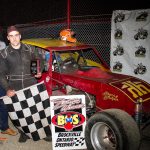