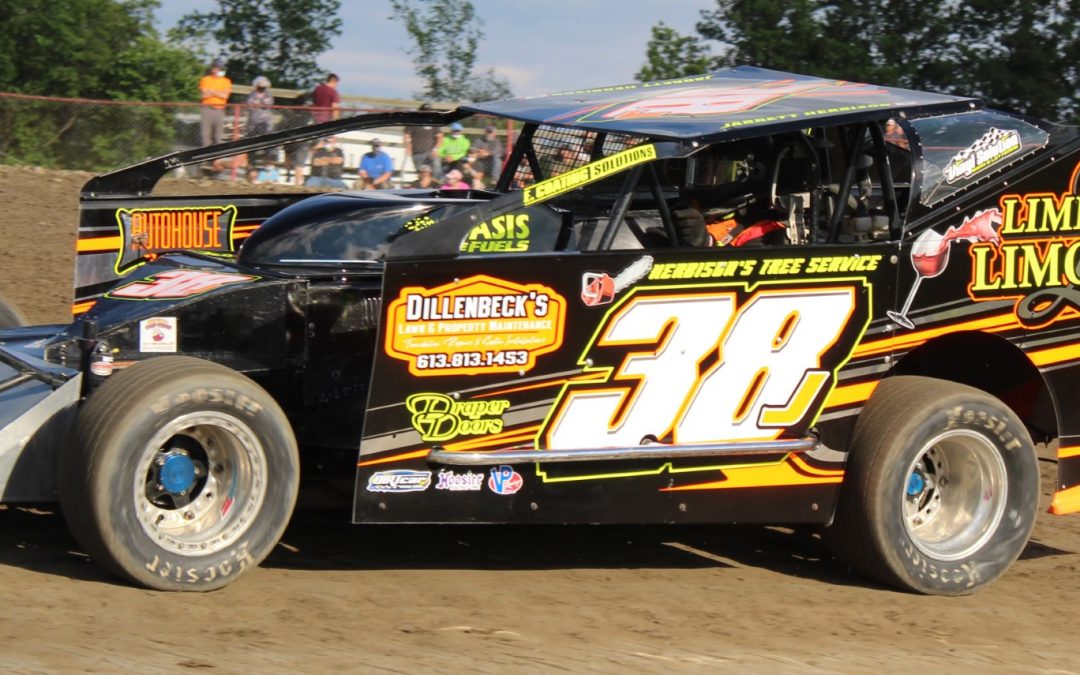 With 2021 point standing finishes of 2nd – powered by a main event win – in the final Sportsman-Modified standings and 16th in the 358 Modified running order, Brockville’s Jarrett Herbison has plans to put both of the teams No. 38j machines through their paces during this year’s edition of the King Edward Auto Parts – Carquest/Dirt Outlaw Apparel Northeast Fall Nationals at Brockville Ontario Speedway.

“Dad won back-to-back Sportsman track championships in 2011 and 2012. He also has Fall Nationals titles from 2011 and 2013 the trophy case,” Jarrett Herbison explained. “They say the apple doesn’t fall far from the tree, so I’ll be doing my best to prove that adage to be correct.”

The 2-day late season spectacular at The BOS kicks-off Friday, October 15th with the championship final for the Ogilvie’s Auto & Fleet Series. 358 Modified teams will run 60 laps with a $2,500 payday. Sportsman-Mods will do 50 laps, with $1,000 to the winner. Also on the schedule will be 30 lap Mini Stock and 25 lap Action Sprint Tour main events. Racing starts at 6:00.

Don’t miss a second of the 2021 edition of the King Edward Auto Parts – Carquest/Dirt Outlaw Apparel Northeast Fall Nationals, October 15th and 16th at Brockville Ontario Speedway. Tickets must be pre-booked and COVID-19 screening completed using the links on the ‘schedule’ page of the track website. For more info and to book a camping site, see www.brockvillespeedway.com or checkout the track’s Facebook, Twitter and Instagram social media platforms.

Jarrett Herbison (No. 38j) is fired-up about running his Sportsman-Modified at this year’s edition of the DIRTcar Northeast Fall Nationals – Friday and Saturday, October 15th & 16th – at Brockville Ontario Speedway.

Jarrett Herbison (No. 38j) will be looking for a win in the Ogilvie’s Auto & Fleet Series 358 Modified finale – Friday, October 15th – at Brockville Ontario Speedway.