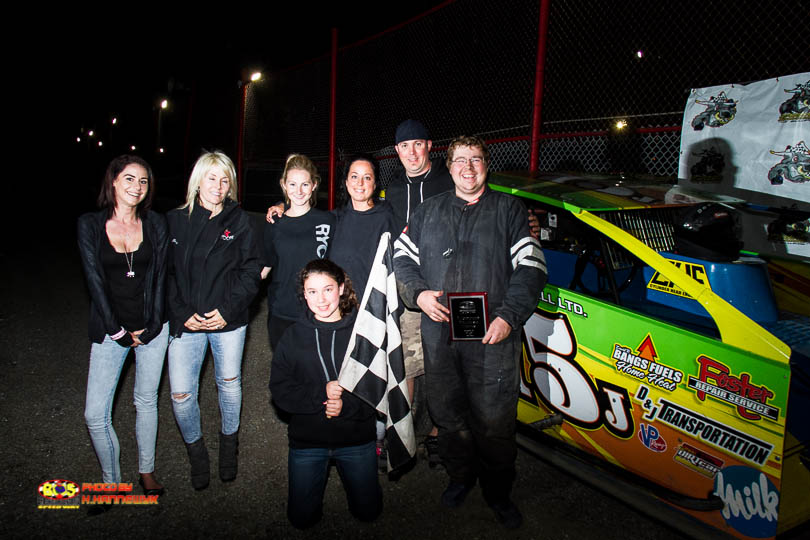 BROCKVILLE, ONT – This past Saturday night at the Brockville Ontario Speedway was emotional as ever as Joe Banks survived a pile of late cautions then held off 2 former track champions for his first career 358 Modified victory, Shane Pecore put it all together for his first Sportsman win of the season, Xavier Andrews stayed perfect in Rookie Sportsman, Tyler Bushey claimed career win number 1 in Street Stock, Teddy Baird topped a competitive Mini Stock field and Brian Comeau claimed the Eastern Ontario Vintage Stock Car Club event.

In what was to become a wild 30 lap 358 Modified feature Joe Banks took the lead fro the outside pole over Jeremy LaSalle, Madison Mulder, Tim O’Brien and 358 Modified rookie Aaron Pugh.

It didn’t take long for the first caution to fly on lap 2 as Danny O’Brien and Brian McDonald came together in turns 1 & 2, but both drivers were able to continue on from the back of the field. When the green flew it was still Banks in control over LaSalle, Tim O’Brien Stephane Lafrance and Madison Mulder. By lap 10 leader Joe Banks had built up a 5 car length lead but Tim O’Brien was on the charge with a brand new Ford power plant under the hood, taking 2nd from LaSalle and quickly closed in on Banks for the race lead.

On lap 14 a scary moment saw Stephane Lafrance tangle with Madison Mulder on the front stretch sending Lafrance spinning in turn 1, as the cars came bt Brian McDonald had no place to go and slammed into Lafrance’s car sending McDonald flipping in the air. The race was red flagged but thankfully both McDonald and Lafrance were uninjured, however their cars were done for the evening.

On the restart Banks would continue to lead but Tim O’Brien was right there to challenge and made several moves to the inside to try and take the top spot. With this going on Madison Mulder was able to get by Jeremy LaSalle for 3rd and closed in on the top 2 drivers. Mulder would then use the high lane in turn 4 as he shot by O’Brien for 2nd and closed in on the leader. Mulder however would see it all go away on lap 18 as he slid off the track in turn 4 bringing out the caution flag.

With the attrition rate high drivers like Luke Whitteker, Kyle Dingwall and Danny O’Brien all moved into the top 5 late making things tough on Joe Banks who was in search of his first win. When the green flew Banks continued on as the leader but Whitteker and Tim O’Brien had a war for 2nd as Whitteker took the spot but O’Brien refused to go away quietly.

On lap 24 Whitteker clipped an infield tire off turn 2 sending his race car spinning several times to the infield ending his great night. Under the same caution Tim O’Brien would suffer a left rear flat tire. He would go pit side and come back for a 9th place finish. On the final restart with 6 to go the crowd was on it’s feet to see if Joe Banks could upset the field.

As the green flew Banks jumped out by 3 car lengths but Danny O’Brien, who was coming from the back after an early accident made a big move to take 2nd from Dingwall in turn 2 and then ran down leader Joe Banks bringing the packed house at “The BOS” to it’s feet.

Danny tried several times to get by and drew even with Banks on the final lap but Joe Banks would not be denied and using the outside lane would finally end may years of heartbreak and frustration as he finally scored his first ever 358 Modified win over Danny O’Brien, Kyle Dingwall, Bobby Herrington and Chris Herbison.
The 25 lap Sportsman feature was equally as exciting as the field would spread out 3 wide, 2 rows deep in the opening lap. Eventually everyone would get the formation to double file racing but the excitement was still there.

Once the laps clicked off defending track champion Shane Pecore would charge from his 9th starting spot to take over the lead with Derek Cryderman Chris Ferguson Steve Barber and Jarrett Herbison giving chase.

Scott McGill would spin his machine in turn 3 bringing out the first caution flag on lap 5. On the restart Pecore continued to lead but Steve Barber had a fast race car as he moved by the leader on lap 7 and looked to be the driver to beat. Behind Barber and Pecore, Ryan Scott, Johnathon Ferguson and Dylan Evoy were all in a tight battle for a top 5 spot as they tried hard to run down the leader.

At halfway Barber was working traffic perfectly and seemed like it would finally be his night to score his first win of the season. But on lap 17 that went by the wayside as he made contact with a lap car on the front stretch sending his car up in the air, off the track and into the pit wall. The race was red flagged and with the newly installed foam blocks Steve Barber was able to walk away from his car without injury.

When the race went back green Pecore took control of the race but Ryan Scott was making a late race charge from second with Johnathon Ferguson watching from 3rd. With 2 laps remaining Pecore nearly slipped off turn 4 but it did not phase him as Shane Pecore finally erased all the bad luck collecting his first win of 2017. Ryan Scott crossed in 2nd with Ferguson, Evoy and Tristan Draper who once again charged from the back of the field for another 5th place finish.

In Rookie Sportsman Xavier Andrews was looking to secure his 3rd straight win but had some struggles working through traffic to get to the front. Dale Gifford had no issues at the drop of the green as he led the way and was strong early on. Behind the leader Joey Paquette, Alex Gagnon and Andrews were all in a heated battle for 2nd.
On lap 9 Andrews was able to assure himself the runner up spot but had some work to do to run down the leader. With 4 to go Andrews made his move taking the lead away and from there would go unchallenged for his 3rd win in a row over Gifford, Joey Paquette, Alex Gagnon and Kelvin Lalonde.

The Street Stocks took to the speedway and John Calgey wasted little time when the green flag flew as h too the lead over Tyler Bushey, Nick Gauvreau Keith Riddell and Michael Dillon. Calgey would lead the opening 5 laps before the first yellow flew on lap 5 for debris in turn 2.

On the restart Calgey continued to lead but Tyler Bushey was tired of running 2nd and would finally get by for the top spot at the halfway point with Gauvreau, Todd Raabe, Michael Dillon and Steve Brady giving chase. Bushey looked to run away and hide as he began to stretch his lead out but a caution for Jonathan Gallipeau on lap 11 would slow his pace.

On the restart Bushey took the lead again but a scary moment behind him saw Steve Kearney break a tie rod on the right front sending his car nearly head on into the turn 4 wall bringing out the red flag. Kearney was able to climb out quickly without injury but his car was destroyed.

On the final restart Tyler Bushey played it perfect as he pulled away at the drop of the green and would go unchallenged to finally score his first ever Street Stock win. Nick Gauvreau crossed in2nd with Todd Raabe, Michael Dillon and Sheldon Hoogwerf rounding out the top 5.

In Mini Stock action Teddy Baird was looking to put early season struggles behind him as he charged from 3rd to 1st on the opening lap to take over the lead with Dylan Kirkland, Chris Bakker, Melissa Gifford and last week’s winner Dustin Bode completing the top 5.

Baird and Kirkland had battle for the win on opening day and resumed that battle on this night as these 2 drivers pulled away from the rest of the field while Bakker, Bode and Gifford tried their best to keep pace.

Over the final laps Baird and Kirkland would enter into lapped traffic which caused both Kirkland and Baird to make some impressive moves to stay out of trouble.

On the final lap Kirkland would pull to the top lane and draw even with Baird in turns 3 and 4 but Teddy Baird had just enough to hold on a collect his first win of the 2017 season. Kirkland crossed in 2nd for the 2nd straight week with Chris Bakker, Dustin Bode and Corbin Millar who charged fro 12th to complete the top 5.

The Eastern Ontario Vintage Stock Car Club was on hand for their inaugural appearance at Brockville. Track regulars Brian Comeau and Nathan Berry would bring the field of 20 car to the green with Comeau taking the lead early on over Nathan Berry, Paul Billings, Ryan Comeau and Steve Billings.
Brian Comeau would put on a dominant performance and looked to go back to back at Brockville but the yellow would fly on lap 12 setting up an exciting finish.

On the restart Comeau would grab the lead but Nathan Berry was right there to challenge and tried the low lane several times to get by for the lead. It would not happen though as Brian Comeau would march on to the Eastern Ontario Vintage Stock Car Club win and back to back wins at “The BOS”. Nathan Berry would cross in 2nd over series regular Paul Billings, Ryan Comeau and former 2 tie street stock champion Steve Billings crossing in 5th.

Next week the Patriot Sprint tour will be ready to invade the fast quarter mile at Brockville along with a full show in all classes brought to you by the good folks at Draper Doors. The action kicks off at 7pm. 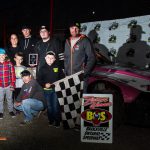 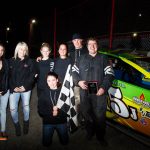 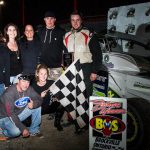 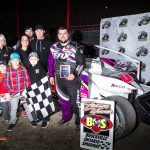 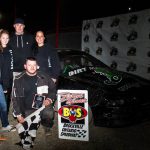 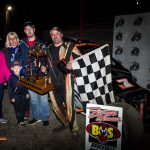 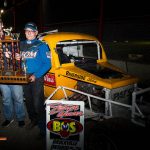