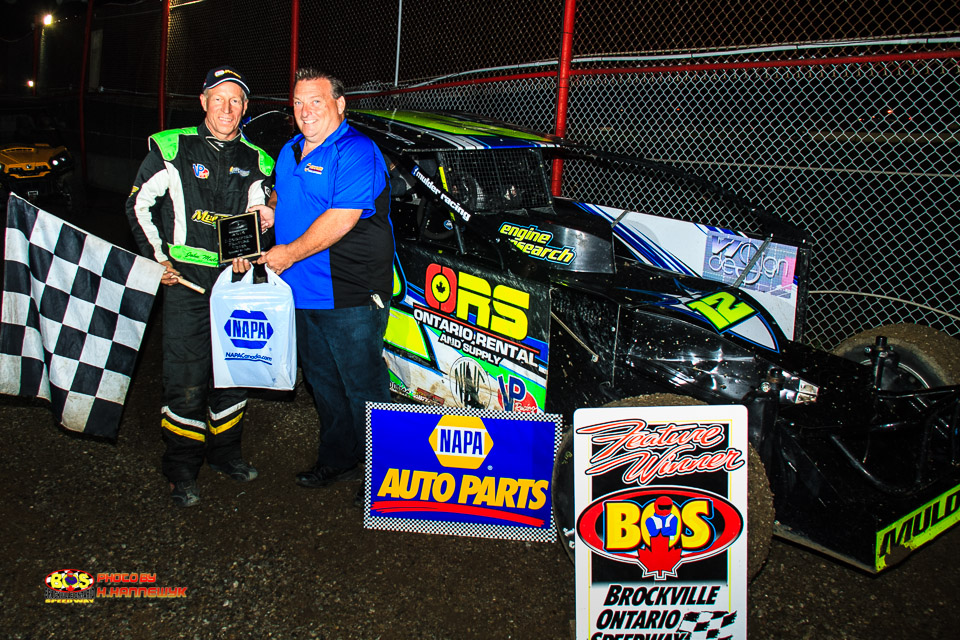 An emotional night this past Saturday at the Brockville Ontario Speedway as Napa Auto Parts was on hand to witness some incredible racing but also the 5th class to be inducted into the Brockville Ontario Speedway Hall of Fame. Denzil and Harold Billings who won numerous features and 3 track championships at the speedway, along with Steve Polite from Polite Sand and Gravel who was a strong competitor for many seasons in the Modifieds and now fields a 358 Modified for his son Kenny. These inductees received a standing ovation for this well deserved honor.

When the racing took center stage the 358 Modifieds were ready to go for 30 laps of racing. John Mulder and Ryan Poole led a strong field to the green with Mulder getting the early advantage. The green flag did stay out for long as 2 yellow flags came out in the first 2 laps. The first caution flew on the start for a 3 car tangle in turns 1 and 2. The 2nd yellow flew for Jeremy LaSalle who slowed in turns 3 and 4. When the green flew and the drivers began to click off laps John Mulder took advantage of the fast track conditions and pulled away from the field with Tim O’Brien who started 9th made his way to the number 2 spot getting by Ryan Poole on lap 5 and setting up a great battle for the lead with Mulder. On lap 7 the yellow flew again for Bobby Herrington who slowed with a right rear flat tire. On the restart John Mulder continued to lead with Tim O’Brien and John’s son Madison Mulder giving chase. With 10 laps in the books Mulder was running a strong race with Tim O’Brien, Madison Mulder, Ryan Poole and Mike Adderley completing the top 5. Over the next 8 laps Tim O’Brien was trying his best to get by one Mulder as well as trying to hold off another one as he battled John for the lead with Madison right there in 3rd making it a great 3 car battle. On lap 18 the yellow flew again bunching up John Mulder, Tim O’Brien, Danny O’Brien, Kyle Dingwall and Madison Mulder for the next restart. When the green flew John got a great restart and began to pull away. Behind the leader the O’Brien brothers put on a great battle for 2nd and 3rd which Danny would eventually win as the laps wound down. It was a perfect night for the Spencerville Ontario native as John Mulder who last won in 2005 for his first 358 Modified victory, finally got the monkey off his back as he cruised to his 2nd career win with Danny and Tim O’Brien coming home 2nd and 3rd, Kyle Dingwall 4th, Madison Mulder rounded out the top 5.

In the 25 lap Sportsman feature Tom Roy took the early race lead from the outside pole over Jason Cummings, Tristan Draper, Connor Dawdy and Tabatha Murphy. Roy had a stout race car in the early stages of the event and was doing all he could to hold off Draper who was looking to end a bad luck string with Johnathon Ferguson giving chase from spot number 3. Over the next several laps Draper was right there to challenge and would take over the lead just before the halfway point with Ferguson moving to 2nd, Roy in 3rd with Murphy running 4th and Shane Pecore who came from 11th on the grid to round out the top 5. On lap 20 Tyler Reynolds spun to a stop in turn 4 and the yellow came out, under the same caution a 3 car tangle on the back stretch occurred involving the winner of the last 2 races, Dylan Evoy. All drivers were able to pull away but Evoy’s rough night was done with a broken front end. When the green flew on lap 20 Draper continued his solid performance but behind him a scary moment occurred as Tabatha Murphy slammed the wall nearly head on coming off turn 4 while running in 5th. The red flag was put out while safety and ambulance crews extricated Murphy from her car. Murphy was taken to local hospital for further evaluation but was alert and talking to race officials. When the green flew Draper took off from the field and never looked back scoring his first win of the season over Johnathon Ferguson who held off a very determined Shane Pecore for 2nd while Ryan Scott and Zac McBride competed the top 5.

The Rookie Sportsman has seen 3 different winners in the first 3 races of 2016 and Jarrett Herbison was looking to become this first 2 time winner as he jumped out to the race lead on lap 3 of the 15 lap event over Chris Ferguson and Dan Christiensen. On lap 5 Mike Evans made contact with infield tire heading into turn 1 and was knocked out briefly. Mike was able to climb out of his car under his own power but had to be helped to the ambulance. When the race resumed Herbison remained in control over Ferguson with Greg Ezard, Dan Christiensen and Jacob Clancy rounding out the top 5. Herbison had one of the fastest cars on the race track and would drive away from the field to score his 2nd win of the year over a hard charging Jacob Clancy, Greg Ezard, Anthony Rassmussen and Chris Ferguson would complete the top 5.

The Street Stocks was not so much a race but a domination clinic put on by Sheldon Hoogwerf. He took the lead at thew drop of the green flag and would pull away from the field by a straightaway over Geneva Sheffield who was looking to put 3 straight weeks of tough luck behind her with Xavier Andrews, Kody Kelly and Travis Andrews completing the top 5. On lap 11 the only caution flew for Perry Como who lost a motor on the backstretch. When the green flew Hoogwerf drove away from the field while Sheffield and Xavier Andrews tried to keep pace. With 2 laps to go Travis Andrews and Geneva Sheffield made contact while battling for 2nd forcing both drivers to the infield ending their possible shot at a top 5 finish. Sheldon Hoogwerf had no issues on this night as he drove away to score his first win of the season over Peter Raabe who put on a late race charge to score the 2nd spot with Alex Gagnon, Nick Gauvreau and Kody Kelly rounding out the top 5.

Thing started off pretty wild in the 15 lap Mini Stock feature as Melissa Gifford took the lead at the drop of the green flag but behind them Bob Ray and Teddy Baird came together in turn 4 bringing out the caution. This would not slow Bob Ray 1 bit as the field went back under green. Ray would charge from 10th on the grid and by the end of lap 3 heading into turn 3 would take the lead away from Gifford and put on an incredible driving display. Dylan kirkland was also running storn in the 2nd spot with Colin Tracey, Gifford and Dustin Bode making up the top 5. Withiout the aid of a yellow flag nobody was catching Bob Ray as he lapped all the way to 6th place running Richard Bartholomew to score his first win of the season over Dylan Krikland, Colin Tracey, Melissa Gifford and Dustin Bode.

The Outlaw Vintage concluded the night and Pete Stapper, former Street Stock champion at Brockville would hold off Josh Powers who was looking for his 2nd win in a row to score his 2nd win of the season by a half car length while Joel McNalty crossed in 3rd.

Next week Draper Doors will be on hand for the first of 2 days of racing kicking off with a full program Saturday night starting at 7pm. Then the popular Father’s Day Enduro is back on Sunday June 19 with racing action beginning at 1pm.