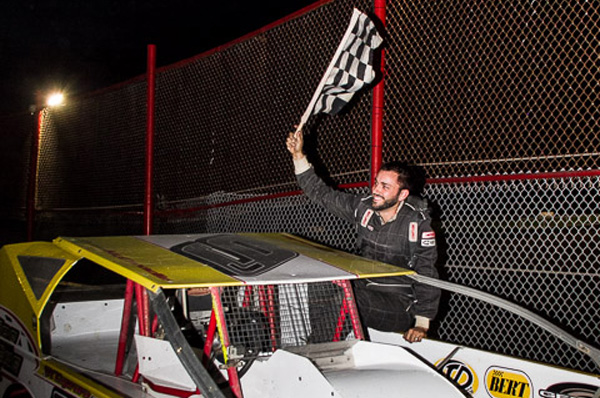 With warm temperatures and tricky track conditions the drivers at the Brockville Ontario Speedway had their hands full this past Saturday night which made for some great racing all evening. The good folks at Draper Doors and the great race fans were treated to a great show.

The 358 Modified division got off to a slow start but when the green flew for the 30 lap feature Kingston Ontario’s Andy Lloyd took the lead over Joe Banks, Jeremy LaSalle, Luke Stewart and Mike Adderley. With all the drivers running around the bottom of the speedway Joe Banks needed to figure out a way to get by the leader. He did just that using the top side of the race track with Lloyd now 2nd, LaSalle, Jordan McCreadie and Mike Adderley. With banks out front and pulling away Jordan McCreadie who moved into the top 5 from his 9th starting spot was on the charge and looking for the leaders. On lap 7 he drove by both Jeremy LaSalle and Andy Lloyd to go into 2nd and 1 lap later would catch Joe Banks in turn 4 and take over the lead heading into turn 4 and start to pull away. With nothing but clear race track in front of his McCreadie was able to pull away to a commanding lead over Banks, LaSalle, Bobby Herrington and Danny O’Brien who was on the charge from the 14th starting spot. O’Brien was not content to ride in 5th as he got by Herrington on lap 16 and then pressured Jeremy LaSalle for 3rd, a position he would eventually take over. With 6 to go Jordan McCreadie had a huge lead over the field and was working traffic perfectly while O’Brien was making a late race charge. But the yellow never flew the entire 30 lap distance and Jordan McCreadie finally got it all together for his first Brockville 358 win in dominant fashion over Danny O’Brien, Bobby Herrington, Jeremy LaSalle and Matt Billings who came from 13th to complete the top 5.

In the Sportsman 25 lap affair a 4 car tangle in the opening lap slowed the field but when the field went back under green it was Jason Cummings jumping out to the race lead over Tom Roy, Brian Comeau, Shane Stearns and Steve Barber. Cummings led the first 4 laps until Steve Barber took command of the field on lap 5 and began to pull away in his stout race car. The Joyceville Ontario native built up a full straightaway lead over the next 7 laps while behind him current points leader Shane Pecore was on the move from his 8th starting spot. He got by Jason Cummings to move into 5th on lap 10 and then drove to the high lane to get by both Shane Stearns and Brian Comeau to take over the 2nd spot on lap 11. The caution flew on lap 12 as Jason Cummings lost the handle on his machine in turn 3 bunching up the field for another restart. When the green flew Pecore immediately went to work on the high side of turn as Barber didn’t get the restart he wanted to allowing Pecore to draw even with Barber heading into turn 1. Both drivers raced side by side not giving an inch before Pecore took the lead for good on lap 13. With Pecore in front Barber held on to 2nd while behind him Ryan Scott, Johnathon Ferguson and Dylan Evoy were all in a great battle for a top 5 position. Evoy was making a charge from the back after his lap 1 tangle and made a great effort getting by both Ferguson and Scott to move into 3rd with 3 laps remaining. The night belonged to Shane Pecore though as the St. Andrews native finally went to victory lane for the first time in 2016 and first since the opener of last year. Barber grabbed his best finish of the year coming home 2nd while Dylan Evoy, Ryan Scott and Johnathon Ferguson rounded out the top 5. Fans were also treated to the return of long time 358 Modified star Dave “the slip” Heaslip who made his Sportsman debut in the Jason Shipclark owned number 20. Heaslip started in the 16th spot and finished a very respectable 11th at the checkered flag.

The Street Stock division had a special 25 lap event and what a race this was as former asphalt star Keith Riddell led in the early going over Kody Kelly, Michael Dillon, Tyler Bushey and Dave Wilgosh. On lap 3 Bushey lost control of his car in turn 4 and the yellow flew. On the restart Riddell continued to lead the way but the story was Brandon Gregory who was charging from his 12th starting spot. Gregory ho won on opening night, was on a mission for his 2nd of the year as he challenged Ridell for the top spot before finally getting by on lap 7 bringing Alex Gagnon and Nick Gauvreau to 2nd and 3rd while Riddell moved to 4th and last week’s winner Sheldon Hoogwerf rounded out the top 5. Gregory without a doubt had the fastest car on the race track as Gagnon and Gauvreau did all he could to stay within striking distance. On lap 18 Nick Gauvreau’s shot at the win went away as he spun in turn 2 while running 2nd. When the green flew Alex Gagnon went right to work as he took over the top spot from Gregory but the action didn’t stop there. Heading into turn 1 Gregory and Gagnon made slight contact sending Gagnon around and collecting Sheldon Hoogwerf in the process. After all this was settled Street Stock rookie Michael Dillon was left in front with Keith Riddell moving back to 2nd and Brock Cullen who came from 16th on the grid to run in position number 3. Over the final 3 laps Dillon held a steady line and went unchallenged to score his first career Street Stock win in just his 5th start over Riddell, Cullen, Nick Gauvreau and Dave Wilgosh who rebounded from early race troubles to round out the top 5.

In the Mini Stock division Dustin Bode was the early pace setter and was looking to score his first ever win as well but he had some tough customer chasing him. Mike McGonegal held on to the number 2 spot while Colin Tracey, Dylan Kirkland and defending track champion Jamie Truelove completed the top 5. Bode held the top spot until lap 6 when Chris Bakker took over the lead and began to pull away but behind the leader last week’s winner Bob Ray was on the move from position number 14. Ray took over 2nd from Colin Tracey and went to work getting by Bakker just past the halfway point. Over the final 6 laps Dylan Kirkland, Jamie Truelove and the rest of the field were unable to catch the Cornwall native as Bob Ray went on to score his 2nd win in a row over Krikland, Truelove, Colin Tracey and Teddy Baird who came from 11th to finish up 5th.

The 15 lap Rookie Sportsman feature was a great one on Draper Doors night as Chris Fleming led in the early going but was being pressured by former karting champions Jacob Clancy and 2 time feature winner Jarrett Herbison. Clancy made the move on lap 3 to grab the lead bringing Herbison to 2nd. On the same lap Colin Tracey, who was making his Sportsman debut, spun in turn 2. On the restart Herbison kept pace with Clancy and their battle continued over the next 3 laps before Herbison took control of the race on lap 6 with Clancy now 2nd and Anthony Rassmussen rounding out the top 3. Herbison was a rail in his number 38J building up a big lead with 5 to go While Rassmussen finally got by Clancy for 2nd with Jeremy Coulter and Tyler Parker completing the top 5. Herbison was not to be denied on this night as he drove on to victory lane for the 2nd straight week and 3rd of the season over Rassmussen, Clancy, Jeremy Coulter and Tyler Parker.

Next Saturday night the 2nd round of the Ogilvie’s Auto and Fleet Triple crown series for the 358 Modified and Sportsman divisions will highlight the night. The Street Stocks and Mini Stocks will also be on the card with hot laps and time trials for the Sportsman and 358 Modifieds beginning at 6 while the first green flag will drop on the first heat race at 7pm.