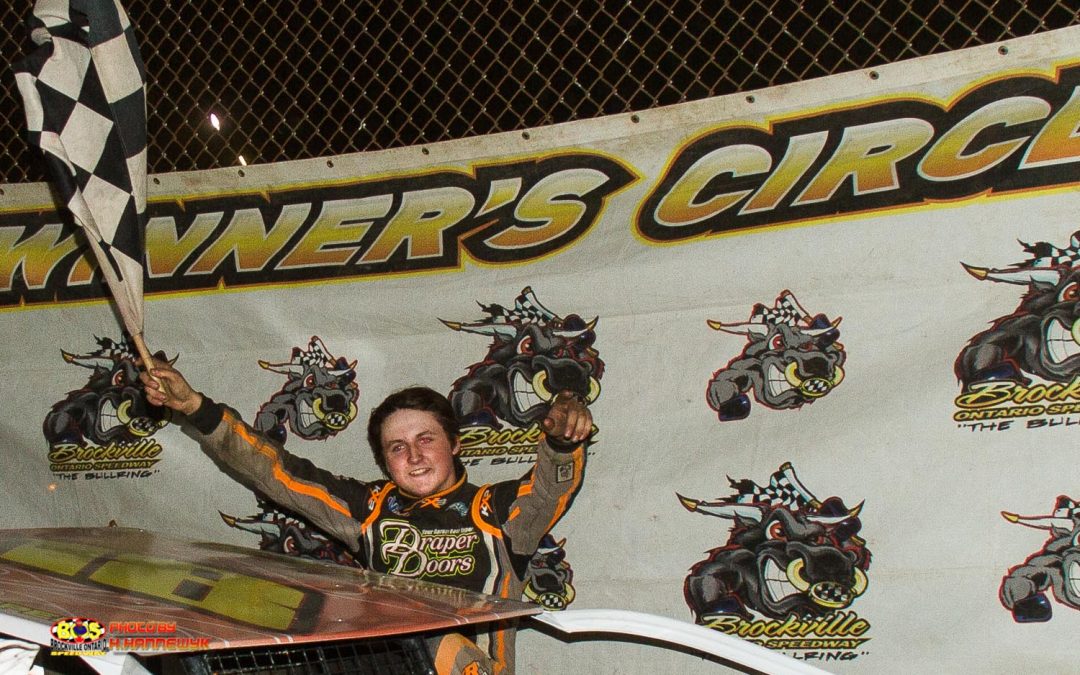 It was a night of firsts this past Saturday night at the Brockville Ontario Speedway as three drivers claimed their first career feature wins on Splash Well Drilling night.

Mathieu Bardier was the dominant force at the start of the 25 lap Action Sprint Tour feature, with Matt Billings, Luke Stewart, Lee Ladouceur and Darren Dryden making up the top 5 spots early on. Bardier has been fast all season and showed it as he pulled away from the rest of the top 5 drivers and was in search of his first series win. It appeared Bardier was going to lead every lap and end the race early but Darren Dryden sailed off turn 4 while running 5th, bringing out the first yellow on lap 11. On the restart Bardier continued to show the way but Lee Ladouceur was on the move as he took 2nd from Billings and tried his best to close in on the leader. With 5 laps left traffic started to come into play but Bardier would get through with no issues, leaving Ladouceur behind in the number two spot. After a championship run that ended because of a bad accident early in the season, Mathieu Bardier rebounded for his 4th win of the season, but more importantly, his first ever Action Sprint Tour win. Lee Ladouceur held on for 2nd with defending series champion Jacob Dykstra edging out Luke Stewart for 3rd at the line, while Matt Billings completed the top 5. The night was also show-up points for track regulars in the 1000 RV Crate Sprint Car division for 2022. Ryan Poole was honored at intermission as the 2022 track champion. Poole won three times during his title run this year.

The start of the 25 lap DIRTcar Sportsman feature took a few tries to get some laps in but Bobby Herrington would move from 13th starting spot to grab the lead from early pace setter Xavier Andrews on lap 5 with Dylan Kirkland, Jessica Power, who came from 15th to 4th early on and Dan Ferguson making up the top 5. Herrington was fast on this night, as he put a straight away on Andrews by lap 10, but Andrews was having his own battle with Dylan Kirkland, who put the pressure on for the 2nd spot. At halfway it was Herrington still in command but the battle for second turned into a 3-car battle, as Jessica Power would join the fight as well, with Evan Reynolds taking the 5th spot after a mistake by Dan Ferguson, which dropped him to the 6th spot. As the laps wound down it was clear that Xavier Andrews and the rest of the field were not going to catch the defending track champion, as Herrington held well over a straight away lead. In the end Bobby Herrington would notch his 7th win of the season and second in a row. Andrews would cross in second over Dylan Kirkland, Jessica Power and Evan Reynolds, who tied his best finish of the season for a second time finishing 5th.

Kalen Draper was looking for some redemption in the 30 lap DIRTcar 358 Modified feature, as he jumped into the early lead over Joe Banks, Lee Ladouceur, Terry McClelland and Johnathon Ferguson. After a season of struggles the Draper Racing team has been the hottest team at The BOS, as Kalen’s brother Tristan had won the last two weeks in a row. Kalen would pull away to a comfortable lead while some of the high point drivers started to move forward. Johnathon Ferguson was able to get to third and bring Ryan Arbuthnot and points leader Chris Raabe into the top 5 also. Draper continued his steady pace as he held the lead and would not be phased by traffic, as he cleared the lapped cars with no issues. On lap 23 a quick yellow slowed the field and would test Draper on the restart. When the green flew Draper once again got to the lead and pulled away from Ladouceur, Arbuthnot, Raabe and Kyle Dingwall, who made his way to the top 5 late in the event. With three laps to go another quick yellow slowed the field as Jarrett Herbison spun off turn 2. On the final restart Kalen Draper would pull away and get some redemption after having a win taken from him on the final lap several weeks earlier, as he scored his first career DIRTcar 358 Modified win. Ryan Arbuthnot got by Lee Ladouceur for second with Chris Raabe and Kyle Dingwall completing the top 5.

Nick Merkley led the start of the 12 lap Street Stock feature over Peter and Todd Raabe. Merkley had a fast car but behind him, it was trouble for points leader Brett Horner. The two-time feature winner, would lose a right rear tire heading down the back stretch ending his night early. On the restart it was Merkley once again in control but Peter Raabe would make his move and take the lead on lap 3, with brother Todd Raabe moving to second. On lap 6 Todd Raabe would make his move for the top spot and start to author a dominant performance. From there it was no contest as Todd Raabe would march on to score his division leading third win of the season over Peter Raabe and Keith Riddell.

Jordan Wood led the opening laps of the 12 lap Novice Sportsman feature but Holly Denard was also on the move and put pressure on the race leader in the opening laps. Wood led the opening three laps until last weeks winner Matt Pruner spun in turn 3. On the restart Jordan Wood remained the race leader but Holly Denard was making her move for the lead. Denard tried the high lane in turn three and pulled alongside the race leader. The top two made contact forcing Denard off the speedway and the yellow flew. Denard would return for the next restart, but Jordan Wood’s night would end early with right rear suspension damage. This left Paul Donnelly in front on the restart but Stephane Fournier, who picked up his first career win a few weeks back, was on the charge and looking for the top spot. Donnelly would not be phased as he held off Fournier in the final laps. Fournier even bounced off the front stretch wall to try and get by the leader, but his shot at a win would have to wait another week. Paul Donnelly would march to his first ever win and become the 9th different winner in the division, breaking the previous record of 8 winners in 2015. Stephane Fournier and Sandy MacFarlane completed the podium.

Next week The DIRTcar Sportsman North Canada Region gets back underway for round three of the series. The DIRTcar 358 Modifieds will be on the card along with Novice Sportsman and the Supernant Truck Shop Mini Stocks. Racing gets underway at 7pm. For news, results and updated points visit our website at brockvillespeedway.com. For instant updates give the speedway a follow-on Facebook, Twitter and Instagram. 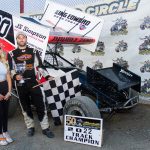 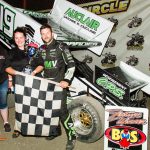 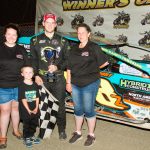 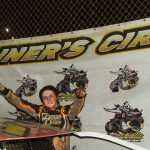 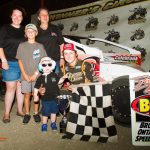 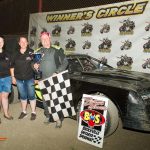 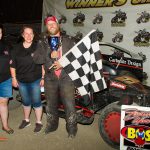