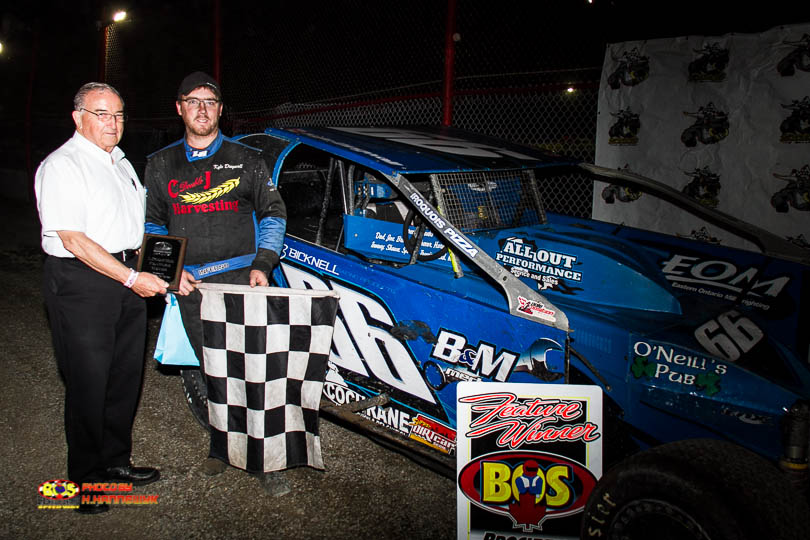 After 1 week of wet weather The Brockville Ontario Speedway was back in full force this past Saturday night with 6 classes of racing action. Kyle Dingwall put all the struggles behind him for his first 358 Modified win of the season, Shane Pecore held off a hard charging Ryan Scott for win number 2 in Sportsman, Joey Paquette won a caution free Rookie Sportsman feature, Nick Gauvreau was dominant in Street Stock, Dylan Kirkland finally broke into victory lane in the mini stock division and Gavin Riddell notched his first career Vintage Modified win.

Andy Lloyd was the dominant driver in the early going of the 30 lap 358 Modified feature as he took the lead at the drop of the green flag over Jeremy LaSalle, Ryan Poole, Kyle Dingwall and Bryan Rogers.Lloyd was on cruise control as he built up over a straight away advantage in the opening laps but Kyle Dingwall cleared all traffic by lap 7 and was charging hard for the lead with LaSalle, Poole and Joe Banks completing the top 5. At the halfway point Dingwall finally ran down the race leader and the battle was on. With Andy Lloyd using the top lane that left Kyle Dingwall’s favorite lane wide open and he used it perfectly as he charged off the bottom of turn 2 with the top spot leaving Lloyd to battle with LaSalle and Joe Banks for the 2nd spot. On lap 17 Danny O’Brien and Ryan Arbuthnot were cutting through the field quickly, however heading into turn 3 the 2 drivers made contact forcing O’Brien off the speedway in turn 3 bringing out the caution. The accident forced both drivers to make a charge from the back of the field. When the green flew it was no contest for Dingwall as he shot out to the lead but Stephane Lafrance and Luke Whitteker were both on the move taking 2nd and 3rd while Andy Lloyd and Joe Banks completed the fast 5. On lap 20 The great run for Banks came to an end as he slid off turn 4 and the yellow flew on the field. When the green came back out Kyle Dingwall was able to make something good happen as he pulled away in the final laps for win number 1 in the 358 Modifieds, Stephane Lafrance also put a solid run together crossing 2nd with Luke Whitteker charging from 10th to 3rd, Andy Lloyd ran great all night to finish 4th while Quebec star Mario Clair made a big move coming from 14th starting spot to round out the top 5.

Shane Pecore was looking for good things to happen after a tough run 1 week ago Pecore would use his outside pole starting spot to take the lead from Steve Barber with Tristan Draper, Johnathon Ferguson, and Jason Shipclark making up the top 5. Pecore clearly had the dominant car in the opening laps and had pulled away from all drivers by lap 8 but Ryan Scott was charging hard as he came from 11th on the grid to the 3rd spot and was looking for more. On lap 13 Jason Shipclark and Dylan Evoy came together in turn 2 bringing out the yellow. Evoy was able to continue on but the night was over for Shipclark. When the green flew Pecore was able to get away once again but Ryan Scott made the move taking 2nd away from Barber while Tristan Draper and Johnathon Ferguson continued to complete the top 5. Both Pecore and Scott were the dominat cars as they pulled away from the field but behind them Barber, Draper and Quebec star Felix Murray were also having a war for position as they traded top 5 positions over the final laps. On lap 22 the leaders began to close in on traffic and Ryan Scott also closed in on Pecore for the lead. However the yellow would fly for Xavier Andrews as he slowed on the front stretch, which would allow Scott and Pecore to settle the win between themselves. When the green flew Ryan Scott did all he could to get by. As the top 2 headed down the back stretch they hooked bumpers but were able to free themselves and drive on. In the end Pecore would hold on for his 2nd Sportsman win of the year with Ryan Scott’s bid for 3 in a row would result in a 2nd place effort. Steve Barber, Tristan Draper and Felix Murray would compete the top 5.

The Rookie Sportsman division saw nothing but green flag racing for the entire 15 lap feature event. Joey Paquette won the qualifying heat early on and was holding off some great talent as Dave McDonald, Alex Gagnon and Dale Gifford were all right there to challenge. Despite several challenges by McDonald in the final laps Joey Paquette would stay in control and charge to his first career win with McDonald, Gagnon and Gifford completing the field.

Nick Gauvreau was the driver to beat in the 15 lap Street Stock feature as he took the lead at the drop of the green flag over Michael Dillon, Todd Raabe, Tyler Bushey and Bob Willimas. On lap 5 Williams great run would end as smoke poured from his race car ending a great run at a top 5 finish. On the restart Gauvreau would remain the dominant car while Dillon and Bushey would battle hard for 2nd and 3rd with Keith Riddell and Todd Raabe rounding out the top 5. After a blown engine 3 weeks ago Nick Gauvreau got it all together and came back with a vengeance scoring his 2nd win of the season over Dillon, Bushey, Riddell and Todd Raabe.

The Mini Stock 15 lap event was on track and ready for battle as well as Dylan Kirkland would take the lead from the outside pole with Dustin Bode, Mark Packer, Jared Gallway and Melissa Gifford completing the top 5 early on. Kirkland was having a fantastic run and was searching for his first ever win in Mini Stock but Bode and Gallway were also on the charge and began to close in. With 4 to go Bode saw his chance at another win go away as he broke while running 2nd bringng Gallway and Chris Bakker into the top 3 with John Lemarche and Mark Packer completing the top 5. On the final restart Kirkland would drive away and go unchallenged to finally score his first career Mini Stock victory at Brockville. Chris Bakker came home 2nd for the 3rd straight week with Gallway, Lemarche and Mark Packer completing the top 5 finishers.

The Vintage division was running with heavy hearts on this night as Noreen Billings, wife of former modified track champion Denzil Billings, passed away earlier in the week and was a huge fan of the Vintage division. With Noreen watching over all drivers it was time to go racing. Gavin Riddell charged to the early lead over Brock Cullen, Brian Comeau, Matt Barbour and Cory Winters. Riddell had a fast car all night long as was in control of the field the entire night. Behind the leader Brock Cullen and Brian Comeau did all they could but Gavin Riddell, in Grandpa Wayne’s car, showed no mercy on the field as he led every lap to score his first career Vintage win. Brian Comeau would charge by for 2nd with Brock Cullen 3rd, Nathan Berry came from 10th on the grid to finish 4th with Matt Barbour crossing in 5th.

Next week a big show is ready to go as the Patriot Sprint Tour will be back in town for the 2nd time. In addition the 2nd leg of the Ogilvie’s Quad Crown Series will also take place along with a full show for Rookie Sportsman, Street Stock and Mini Stock. This is one show you don’t want to miss, all racing action kicks off at7pm. 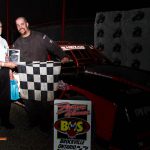 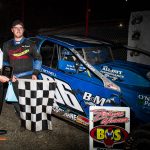 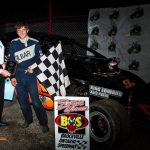 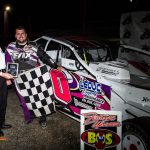 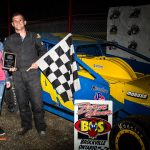 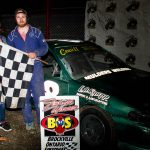