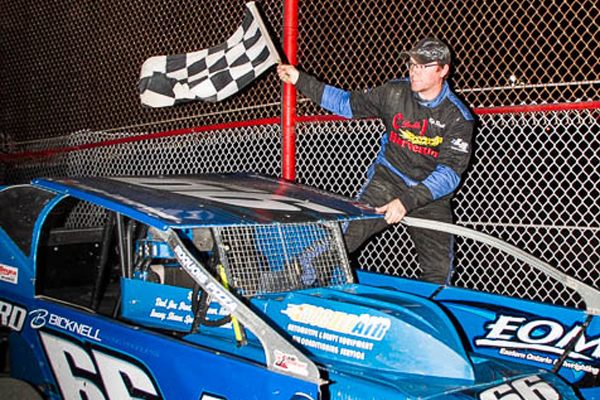 Week number 7 at the Brockville Ontario Speedway this past Saturday night saw 6 big classes ready for action and all eyes were focused on the Mini Stock division who were geared up for a big 25 lap feature event.

The Mini Stock 25 lap event was faced with plenty of attrition as several early race cautions slowed the pace of the event. Colin Tracey, Dylan Kirkland and Melissa Gifford all suffered heavy damage to their race cars in the early going but were able to climb from their cars without injury. Once the laps clicked off Chris Bakker and Bob Ray were the class of the field with Teddy Baird, Jamie Truelove and John Lemarsh completing the top 5. Ray held a slight lead over Bakker while Baird and Truelove were on the move and would both get by Bakker to move into 2nd and 3rd by halfway. On lap 15 Baird used the outside lane in turn 3 to take over the lead bringing Jamie Truelove with him to 2nd while Bob Ray tried to regroup and run the top 2 back down. With 5 to go Ray would regain the 2nd spot and started to put the pressure on Baird for the race lead. On lap 23 Ray would slow with a problem in turn 2 and had to be pushed to the pits, ending his shot at victory. When the green flew Teddy Baird showed the way but Kurtis Daye was on the move after an early tire problem. Daye took 2nd from Truelove but that was as far as he would get on this night. Teddy Baird stayed strong in the top spot and was not to be denied as he scored his 2nd win of the year over Daye, Chris Bakker, Jamie Truelove and Samantha Henderson.

The 25 lap Sportsman feature was ready for battle and unlike the previous feature, would see no yellow flag during the entire event. Zac McBride took over the lead at the drop of the green flag over Shane Stearns, Tristan Draper, Nathan Berry and Johnathon Ferguson. McBride, a Rookie Sportsman graduate had a strong race car and was looking to score his first ever Sportsman win but the field behind him was not making things easy. By lap 10 Stearns, Draper and Ferguson were all right there to challenge but McBride was not backing down as he still held the top spot. The man who was charging forward at the halfway point was Steve Barber coming from his 7th starting spot. On lap 14 Barber made his way to 3rd while Stearns was able to make his way to the race lead getting by McBride with Draper and now Aaron Pugh making up the top 5. Stearns was pulling away from a stout field but Barber was making a hard chare to the front of the field as he took 2nd from McBride and quickly closed in on the leader who appeared to lose the handling on his race car. On lap 21 Barber made the pass that counted as he took over the lead for good with Stearns now having to deal with Dylan Evoy for position number 2. After heartbreak 1 week ago Steve Barber had everything go his way as he checked out to score his first win of the year over Evoy, Stearns, Draper and Aaron Pugh.

The 358 Modifieds were next on the grid and Chris Herbison was the early race leader over Luke Stewart, Gage Morin, Stephane Lafrance and Ryan Poole. With 2 great grooves on the track Herbison was able to use the top lane to his advantage as he pulled away from a talented field of drivers while Lafrance and Morin were starting to close in. On lap 7 Morin was able to power away on the bottom lane to take over the lead and was on a mission to become the 2nd 2 time winner of the year. The yellow flag flew for the first time for John Mulder who slowed in turn 1. On the next restart Chris Herbison the leader got the jump off turn 4 bringing Kyle Dingwall to 2nd who immediately went to work to get by Herbison for the lead. The 2012 track champion would get the job done down the back stretch and begin to open up a comfortable advantage. The caution flew before halfway setting up another key restart. When the green flew Dingwall took the lead again while Herbison and Lafrance had a great battle for 2nd and 3rd. Herbison was able to keep the 2nd spot but the drivers on the move were points leader Danny O’Brien and Jordan McCreadie. both drivers would break into the top 5 with 10 laps remaining form 15th and 16th starting spots respectively and were looking to close in on the leaders. With 3 laps to go Dingwall had a sure win in the bag but that all changed as Matt Billings slowed on the back stretch. On the restart Dingwall pulled away while Danny O’Brien got the run he was looking for taking 2nd away from Herbison and tried hard to take the lead from Kyle Dingwall. Over the final 3 laps Dingwall held off all challenges and scored his first win since June. 28 of 2014 at “The BOS”. Danny O’Brien settled for 2nd with Chris Herbison, Stephane Lafrance and Jordan McCreadie completing the top 5.

In the Rookie Sportsman 15 lap event Dan Christiensen was the early leader over Chris Ferguson and Tyler Parker. All 3 drivers at the front were determined to get their first ever win but the drivers on the move were Anthony Rassmussen and Jake “The Snake” Clancy coming from row 3. Clancy made the charge first getting by both Christensen and Ferguson for the lead and began to pull away from the field. As the laps wound down Rassmussen finally clear all traffic in front of him but still had over a straightaway to make up with only 4 laps to go. That deficit was all thrown away as the caution flew for Matthew Barbour who slowed in turn 2. When the green flew for the final time Clancy was able to hold off Rassmussen over the next 4 laps to score his 2nd win of the season over Anthony Rassmussen with Chris Ferguson crossing in 3rd.

The Street Stock division has been one of the most competitive fields in recent history with only 1 multi-time winner in the 2016 season. Tyler Bushey charged from his 3rd starting spot to take over the lead in the early going over Nick Gauvreau, Alex Gagnon Michael Dillon and Todd Raabe. These 5 drivers put on a great battle until lap 4 when a small shower passed over the speedway putting the race briefly under the red flag. Once the shower passed the racing never changed, the only thing that did change was the race lead as Gauvreau found his way by Bushey to take over the top spot with Gagnon, Dillon and Raabe continuing to complete the top 5 drivers. On lap 10 the final yellow flew for Sheldon Hoogwerf who lost a wheel in turn 3. When the green came back out Nick Gauvreau was able to stay in front and hold off Gagnon and Todd Raabe for his first win of the season with Tyler Bushey and Michael Dillon completing the top 5.

The Outlaw Vintage made it out on the speedway but a heavier shower came through forcing race officials to run double features for the Vintage next Saturday night.

Next week along with the double features for the Outlaw Vintage, a full program is slated to go with racing beginning at 7pm.