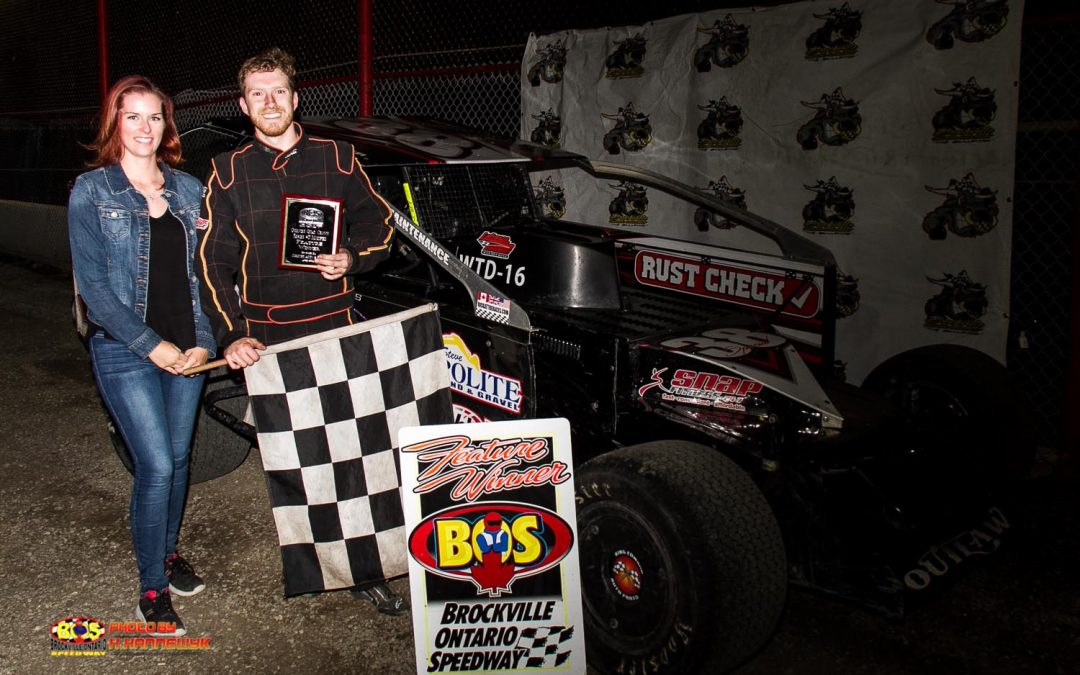 BROCKVILLE, ON – On a brisk night at the Brockville Ontario Speedway this past Saturday night the Ogilvie’s Auto and Fleet Quad Crown Series for the 358 Modified and Sportsman divisions took center stage and the racing was intense all night. Luke Whitteker made a statement as he dominated the 50 358 Modified portion of the series, Ryan Scott held off a hard charging Dylan Evoy for the 40 Sportsman Series win, Jeff May drove away to the TUSA Mod Lite Series checkered flag, Alex Gagnon finally scored his first ever Rookie Sportsman feature, Dylan Kirkland made it 3 wins in 5 tries in Mini Stock while Todd Raabe and Tyler Bushey claimed the Street Stock double header.

Luke Whitteker would take the lead at the drop of the green flag in the Ogilvie’s Quad Crown Series for the 358 Modifieds with Danny O’Brien, Bobby Herrington, Dale Planck and Mario Clair completing the top 5. The first yellow of the night didn’t take long to come out as Chris Herbison had problems on the back stretch slowing to a stop. On the restart Whitteker took over the lead once again and began to put on a driving clinic while behind him Herrington, O’Brien and Planck were putting on a great show battling for position. O’Brien would take over 2nd and pull away leaving Herrington, Planck and Mario Clair to battle it out in the top 5. On lap 18 the next yellow flew as Aaron Pugh and Steve Bilow both broke the front end on their cars ending their night early. When the green flew O’Brien tried at will to keep pace with Whitteker but was unable to as he put a straightaway between himself and the rest of the field near the halfway point leaving other driver to battle it out. On lap 30 the track began to take on rubber which forced everyone to the bottom lane which was a huge advantage for Whitteker as he continued to pull away but with everyone running the bottom lane it made passing very tough. On lap 36 the final yellow flew as 358 Modified rookie Mathieu Laramee slowed to a stop on the back stretch. On the final restart Whitteker got the best restart of the night as he shot off the corner over O’Brien, Herrington, Planck and Kyle Dingwall who charged from 10th to round out the top 5. On this night it was all about Luke Whitteker as he dominated for his 2nd straight Ogilvie’s Series victory and 2nd win of the year with Danny O’Brien, Dale Planck, Bobby Herrington and Mario Clair completing the top 5.

In the 40 lap Sportsman event Tristan Draper was the class of the field in the early going as he used the top lane to his advantage pulling away from a quality field over Steve Barber, Ryan Scott, Dylan Evoy and Jarrett Herbison. Draper had a stout race car in the early stages but on lap 8 the caution would fly as Johnathon Ferguson and Derek Cryderman tangled on the front stretch. The green would come back out for another short 4 lap run until lap 12 when Thomas Cook spun off turn 4 and the caution flew again. On a lap 13 restart Ryan Scott would flex his muscle as he shot by Draper on the bottom to take over the lead while Evoy, Steve Barber and Johnathon Ferguson completed the top 5. Scott had a great race car and proved it as he dominated the mid portion of the event while Draper was in a battle of his own with Dylan Evoy and Steve Barber. Evoy tried several times to gain position on Barber and did so taking the 2nd spot. Then after a lap 20 caution was able to clear Tristan Draper and make an attempt to run down the leader. On lap 35 the final yellow flew which was all Evoy needed to try for the lead. When the green flew Ryan Scott would get the best restart of the night as he drove away from Dylan Evoy and Tristan Draper to score his 4th win of the year and 2nd in a row in the Ogilvie’s Series. behind Evoy and Draper at the line was Johnathon Ferguson who charged from the back to finish 4th while Steve Barber scored yet another top 5 finish.

For the first time in 2017 the TUSA Mod Lite Series was in town and the 2 drivers that seem be dominant started on the front row as Jeff May and Paul Klager led the field to the start of the 25 lap feature with May getting the advantage over Klager into turn 1. The top 2 were able to put some distance on the rest of the field in the opening laps but Klager’s night was about to get a little busier as he pitted during a quick yellow on lap 4 but would return to the speedway. This left Jeff May in control with Tyler Winger jumping to 2nd from his 8th starting spot with Dave Brown, Rej Lemieux and Harley Brown completing the top 5. As the laps clicked off Jeff May had his car on auto pilot and despite a late caution flag, nobody was catching Jeff May on this night as he cruised to the TUSA Series victory in dominant fashion over Winger, Paul Klager charged to 3rd while Dave Brown and Rej Lemieux completed the top 5.

The Rookie Sportsman 15 lap feature saw a great battle between 2 graduates of the full fender ranks at Brockville with Alex Gagnon and Corbin Millar battling for the top spot. Gagnon led early on but Millar who was making his debut was able to take over 2nd and try to run down the leader. On lap 7 Geneva Sheffield spun in turn 4 giving Millar an opportunity. On the restart Gagnon was able to pull away and never look back as he finally scored a win in the Rookie Sportsman division over Corbin Millar and Joey Paquette.

Melissa Gifford was the star of the show in the opening laps of the Mini Stock feature with Dylan Kirkland and Joe McNichols giving chase from 2nd and 3rd. Gifford would hold the top spot until lap 6 when Kirkland was able to take over while behind the top 2 Joe McNichols would charge to 2nd setting up a great battle over the final 9 laps. Both Kirkland and McNichols had the fastest cars on the track and raced side by side the rest of the event. On the final lap McNichols had the inside lane but Kirkland had all the momentum on the top. As the top 2 raced to the checkered flag it was Dylan Kirkland first to the line by mere inches for his 3rd win in the last 5 weeks. Joe McNichols crossed a close 2nd over Chris Bakker, Andrew Leroux and Dustin Bode who rallied from an early race tangle to complete the top 5.

The Street Stock division had 2 features slated on the night, the final 11 laps of last week’s feature were completed early in the day as Todd Raabe was able to take over the top spot at lap number 8 and would hold off a late charge by both Michael Dillon and Sheldon Hoogwerf to claim his 3rd straight win. In the night cap Raabe had some handling issues but was able to take the lead but Tyler Bushey was the driver on the move as he charged to 2nd on lap 7 and pressured Raabe for the lead. On lap 8 Bushey was able to use the bottom lane to get by and would never look back as he drove on to his 4th win of the year and first since June 24th. Michael Dillon crossed the line 2nd over Todd Raabe, Kyle Massey and Ryan Brown.

Next week a full show will be ready to go with Foster’s Repair on hand for a great night which features the new Q3 qualifying system for the Modified and Sportsman plus a full show for Rookie Sportsman, Street Stock and Mini Stocks and the return of the Outlaw Vintage Modifieds. Racing begins at 7pm. 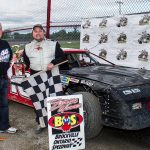 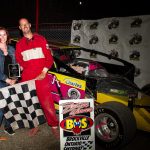 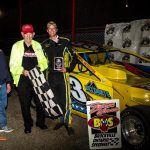 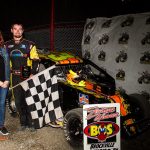 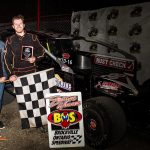 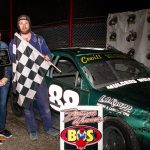 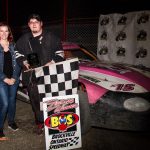