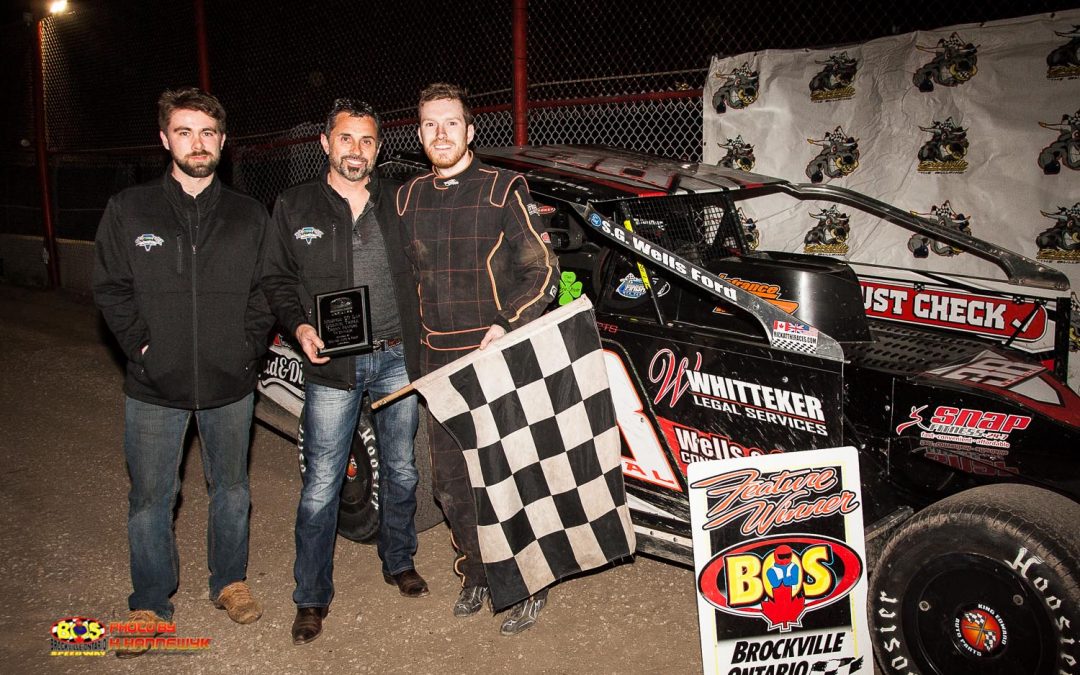 BROCKVILLE, ONT – An absolutely picture perfect night this past Saturday at the Brockville Ontario Speedway as Ogilvie’s Auto and Fleet presented the opening round of the Ogilvie’s Triple Crown Series for the 358 Modifieds and Sportsman. The racing was intense and a story of perseverance highlighted the night.

The 50 lap 358 Modified portion of the Triple Crown Series kicked off with the 2 recent track champions leading the field to green with Danny O’Brien taking the lead over Luke Whitteker and Cornwall Speedway invader Joey Ladouceur. O’Brien started to open up a sizeable advantage over the rest of the field as Whitteker tried to keep him in sight. As the laps clicked off drivers started to move forward in a hurry as Brian McDonald ,made his way charging around the top side from 8th spot to 3rd around Corey Wheeler and even further back Chris Herbison was on the charge from the number 12 position as he took over 4th on the same lap. On lap 10 Ryan Arbuthnot and Brian McDonald made slight contact on the front stretch resulting in a left rear flat tire for Arbuthnot who was fresh off a win the previous night at Can-Am. He would return to the speedway but had to make a charge to the front. On the restart it was once again O’Brien out in front of the field but Whitteker stayed within striking distance of the veteran and made a challenge for the lead. But early on the high side was the place to be as O’Brien stayed up front and in control with Brian McDonald on the charge and looking for 2nd. The man they call Slim took over the 2nd spot but it was short lived as on a lap 16 restart McDonald would jump the cushion ending his great run in turn 4. He would restart 25th and come home 11th at the finish. As the laps began to clicked off Whitteker’s car started to get just a little better as he closed in on the leader with Joey Ladouceur, Mario Clair and Corey Wheeler completing the top 5. After a quick caution on lap 38 it set up a key restart for Luke Whitteker as he stayed with the veteran O’Brien over the next 10 laps. On lap 49 coming to the white flag Whitteker saw O’Brien was fading on the top side and charged by on the bottom lane. Luke Whitteker went from an early winter skiing accident which nearly ended his career, to claiming the opening day checkered flag and his overall 4th straight Ogilvie’s Series win. Danny O’Brien held on for 2nd with Corey Wheeler, Mario Clair and Ryan Arbuthnot rebounding for 5th.

In the Sportsman 40 lap portion of the Triple Crown 3 time track champion Shane Pecore took the lead in the early going over Johnathon Ferguson, Ryan Scott, Brad Winters and Brianna Ladouceur. Over the opening 11 laps the St. Andrews native was the dominant driver on the night as he pulled away from a quality field. Lapped cars started to become a factor on lap 9 which allowed Ferguson to close the gap. A lap 12 a multi car crash in turn 2 brought out the first yellow of the day. All drivers were able to continue. On the restart Pecore continued to lead but the track took a major change as a tremendous amount of rubber was laid down causing everyone to migrate to the bottom which made getting through traffic key at thr halfway point. Pecore held a slight lead but Ferguson and Scott were closing in making it a great 3 car battle for the race lead. Once in traffic Pecore made a move to the high side to get around 2 cars but it opened the door for Ferguson to sneak by on the bottom and take the lead bringing Ryan Scott to 2nd as Pecore faded to 3rd on lap 29. On lap 33 the final yellow flew as Jamie Young broke the front end on his car in turn 4. When the green flewFerguson continued to lead over Scott, Pecore, Brianna Ladouceur and Brad Winters continued his strong drive into 5th. With no traffic to deal with over the final 7 laps Johnathon Ferguson completed a solid weekend. After a big win Friday night in the opener at Mohawk he charged on to claim his 2nd opening day win of the weekend and 2nd straight Ogilvie’s Series opener. Ryan Scott held on for 2nd over Shane Pecore, Brianna Ladoucer and Tristan Draper who charged by Brad Winters to claim the 5th spot at the checkered flag.

In Rookie Sportsman action Xavier Perrin took the lead at the start of the 15 lap feature event but didn’t last too long as he slipped off turn 2 allowing Gavin Riddell to take over the top spot and begin to pull away. As Riddell pulled away Jonah Lewis and Jason Rose were having a solid run in top 3 with Perrin rebounding to charge into the number 4 spot with Melissa Gifford completing the top 5. With all drivers new to the Sportsman ranks they all put on a fantastic show but on this night it was all Gavin Riddell as he motored away taking his first ever Sportsman win in the Rookie class. Jonah Lewis held on for a solid 2nd place effort with Jason Rose 3rd after a tough night a Mohawk the night before, Xavier Perrin took home his 2nd top 10 of the weekend claiming a 4th place effort after finishing 7th at Mohawk the previous night, Melissa Gifford would cross in 5th.

The Street Stock division was wild on the start as Sheldon Hoogwerf took the lead but Michael Dillon, Tyler Bushey and Keith Riddell decided to try a 4 wide effot on the back stretch heading into turn 3. Bushey backed out leaving Hoogwerf, Dillon and Riddell 3 wide. As they exited the turn Hoogwerf would gain the race lead over Dillon and Riddell. On lap 3 Kyle Massey looped his car around in turn 2. On the restart Hoogwerf kept a solid lead but Michael Dillon was chipping away at that lead and eventually caught Hoogwerf as the race approached the halfway point. Tyler Bushey also was settling into a nice groove as he closed in on the top 2 drivers making it a great 3 car battle. Keith Riddell was also fast as he made a late race charge to 2nd and quickly closed on the race leader. On lap 13 it all went away for Riddell as he slowed allowing Michael Dillon and Bushey to get by setting up a great 3 car battle for the win. On the final lap the veteran Sheldon Hoogwerf was not to be denied. After a blown motor in an early week practice session Hoogwerf would march on for the opening day victory. Michael Dillon held on for 2nd with Tyler Bushey, Steve Brady and Keith Riddell holding on for 5th at the checkered flag.

The popular Mini Stock division was set to go for 15 laps and Dylan Kirkland wasted no time grabbing the lead away over Dominick Merkley, Jared Galway Andrew Leroux and Brandon Henderson. Kirkland’s lead however would not last long as Merkley charged by to take over the top spot on lap 4 bringing Galway to 2nd and Kirkland dropping to 3rd. At the halfway point Tyler Haazelar saw a chance at a top 5 run go away as he spun coming off turn 4. He would rebound to finish 9th. When the green flew Dominick Merkley was able to pull away but Galway and Kirkland were still there putting the pressure on. After running a partial schedule and collecting a win late in 2017, Dominick Merkley took his machine to the front early, stayed there, and never looked back scoring the first win of the 2018 season and 2nd of his career. Kirkland held on for 2nd with Jared Galway Andrew Leroux and Brandon Henderson claiming the 5th spot.

Next week a full show in all classes will take place along with the first race of the year for the Outlaw Vintage Modifieds. The good folks at Superior Cellular and Sound will be on hand with racing beginning at 7pm. 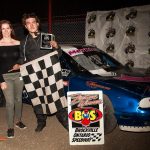 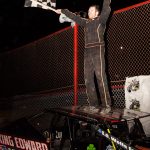 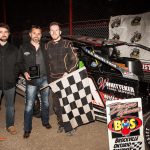 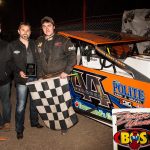 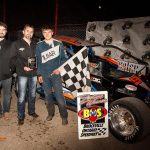 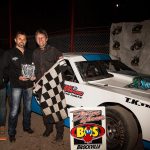