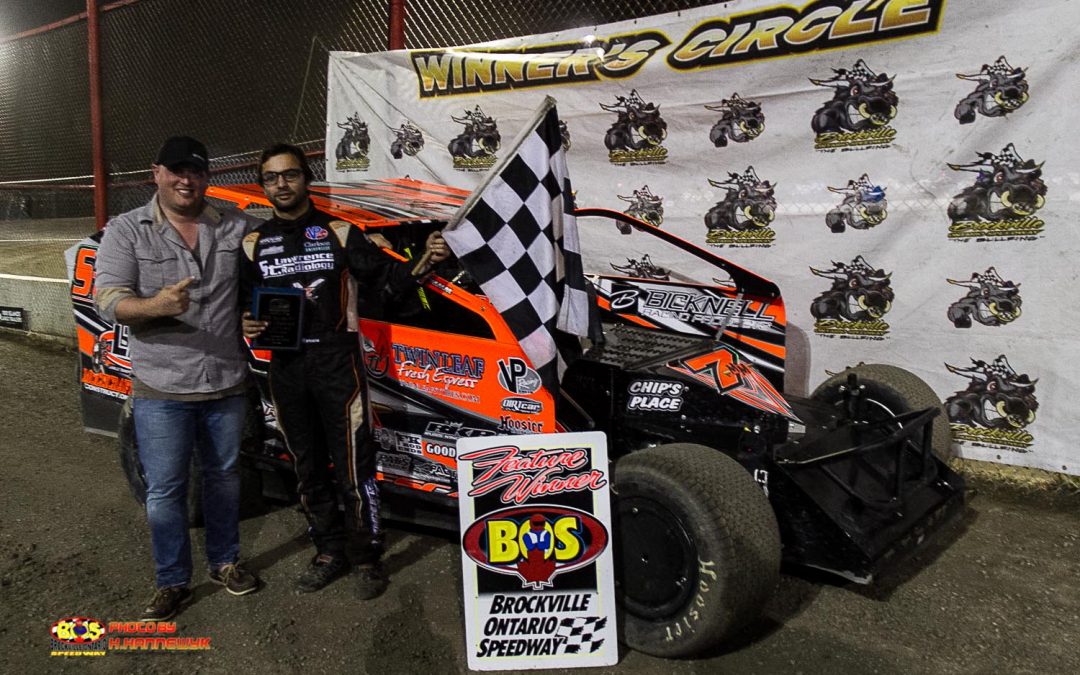 BROCKVILLE, ON – It was a memorable night at the Brockville Ontario Speedway this past Saturday night as two legends at “The BOS” were honored in the 2019 Brockville Ontario Speedway Hall of Fame. Dubbed the “Joyceville Jet” Rick Wilson thrilled crowds for years at Brockville with his hard charging style which won him countless features in the 358 Modified ranks for many seasons. To this day Rick continues to win race at Brockville having won a 360 Sprint car show two years ago. The longtime veteran was not able to be in attendance due to a racing commitment but spoke via phone to the massive crowd on hand and said that fans keep the sport going and without them we wouldn’t be able to do this and the hall of fame would not be possible. Rick claimed the 1996 358 Modified title, his only championship at the speedway. Wilson also held the title as “The King” at Autodrome Edelweiss where he was also the winningest driver and champion at the speedway.

The second inductee was Kingston Ontario’s Danny O’Brien who literally dominated the 358 Modified ranks since the track re-opened in 1993. After helping his hall of fame father Pat Sr. and hall of fame brother Pat Jr. on their race cars Danny began his career in 1987 in the modified ranks and “The Pocket Rocket” never looked back. He would win countless features at Brockville including several triumphs in the DirtCar 358 Modified Series but says the saying a certain win was the biggest is hard to say because they all mean so much. A terrifying wreck in 1996 at Can Am still did not slow down his desire to win as he would claim several more wins and titles before claiming his final track championship in the 2018 season. That year after 32 years he announced his retirement at the Fall Nationals to a standing ovation. His numbers include 192 DirtCar Modified wins, 181 of them on the 358 Modified side which is third all time on the current list along with 14 Brockville titles in a 27-year span. Danny continues to be heavily involved as car owner to younger brother Tim, in the 358 Modified ranks at Brockville.

With nothing but a feature win on the line in the 1000 Islands RV 358 Modifieds Corbin Millar would race out to the early lead in the event with Tristan Draper, Ryan Arbuthnot Michael Maresca and Aaron Pugh giving chase. On lap 5 Aaron Pugh would slide off the top side of turn four and the yellow would fly. On the restart the fans on 1000 Islands Toyota night got to know how good Michael Mareasca is. He would restart 4th and make a big move by Tristan Draper and 2019 track champion Ryan Arbuthnot to go to 2nd. Off turn 4 heading to the line Maresca would use the bottom lane and take over the lead and author a dominant performance like no other. Building up nearly a half track lead Maresca was running through traffic and setting a torrid pace that 2nd place Ryan Arbuthnot was trying to keep up with but with little success. With 10 laps remaining Maresca was literally on auto-pilot as he began lapping into the top 10 which included early race leader Corbin Millar with Arbuthnot, Tim O’Brien, Chris Herbison and Kyle Dingwall giving chase. After running through the field at Mohawk in a 50 lapper a night earlier, Michael Maresca would dominate the field for his first Brockvile 358 Modified win. Ryan Arbuthnot would close out his championship season with a 2nd place finish. Tim O’Brien, Chris Herbison and Kyle Dingwall would complete the top 5.

Thee Sportsman ranks saw a 13-point advantage for Ryan Scott over Johnathon Ferguson after the qualifying heats and Scott knew all he had to have was a solid day. Ferguson was on a mission to win. Melissa Gifford would be the early pace setter in the 25-lap event over Devin Willis, Xavier Perrin, Dan Ferguson and Tyler Reynolds. Willis would put pressure on Gifford for the lead and take over the top spot on lap 8 with Dan Ferguson also charging by to pick up the number two spot. By the halfway point Willis was in control but Dan Ferguson was on the move. Ferguson would move by Willis and was looking to bag win number two of the season. A caution would fly that would be a key restart for Johnathon Ferguson and cause a bit of stress for Ryan Scott. On the restart Dan Ferguson remained in control but Johnathon Ferguson would come from 8th to third with some bold moves in traffic and was on his way to the lead. On lap 18 it was a Ferguson battle at the front for the top spot (no relation by the way) with Johnathon getting the leap on lap 19 as Ryan Scott was stuck in 6th leaving him one point behind in the title chase. As Johnathon Ferguson pulled away the battle was on for 2nd as Dan Ferguson and Devin Willis were at it with Xavier Perrin and Tyler Reynolds battling for 4th and 5th. Ryan Scott was still stuck in 6th and needed to pick up one more spot. With 4 to go that would happen as Xavier Perrin would shred a right rear tire and see his best finish of the season go away allowing Ryan Scott to move into 5th. He may have come up one point short of a title but it was Johnathon Ferguson’s night as he scored his 4th win of the year with Devin Willis edging out Dan Ferguson for 2nd while Tyler Reynolds claimed 4th and Ryan Scott would hold on for a 5th place effort and a 2nd straight Brockville championship.

The Draper Doors Rookie Sportsman had three drivers in line with Evan Reynolds and Tyler Stewart close for the track title and Terry McClelland, who had a mathematical shot as well. In the opening laps of the 15-lap event Kalen Draper was only worried about winning the race as he led early on over Domonick Merkley and Dylan Kirkland. The top three were holding their own up front as behind them the top two in the points Stewart and Reynolds continued their battle for 4th and 5th. On lap 6 Terry McClelland saw his chance at the title begin to slip away as he spun in turn two. He would end his night with a 7th place finish. On the restart Kalen Draper was not phased by anything as he charged to a commanding lead over the remaining laps. Despite a late charge by two-time winner Dylan Kirkland, it was Draper who would march on to score his 2nd win of 2019 with Kirkland a solid 2nd, Domonick Merkley, Tyler Stewart and Evan Reynolds would complete the top 5. Evan Reynolds 5th place effort was plenty good to lock up the championship.

The Street Stock title was already decided as Michael Dillon was the man in charge, locking up the title a week earlier off the strength of 4 feature wins. Kyle Massey was the driver in charge in the early laps but the pressure was on a Dillon and Tyler Bushey were right there on his back bumper. On lap 6 it was Michael Dillon to the top of the leader board over Massey and Bushey. The lead however was short lived as Dillon ran into front end issues on his car slowing in turn 4 and thee yellow flew. When the green flew Tyler Bushey would take over the lead from Kyle Massey as Bruno Richard would move into the picture as he charged to 2nd. Over the final laps, the two-time track champion would pull away from a quality field to record his third win of the season at Brockville. Bruno Richard claimed another runner up finish with Steve Brady coming home third over Keith Riddell and Jessica Pasinetti.

The Mini Stock title was down to two of the most consistent drivers all season as Andrew Leroux held a slim 11-point lead over Jared Galway in the fight for the championship. After several early race cautions it was new comer Hayden Brown jumping to the top spot with title contenders Andrew Leroux and Jared Galway completing the top 3. Brown had the fastest car on the race track and was not worried about any points, just trying to get back to back feature wins. As the laps wound down veteran Marc Dagenais, a three-time winner in 2019 was charging to the front as he took 2nd from Leroux but still had work to do to catch Brown. Over the final laps Hayden Brown would prove to be too much for the field as he stormed to his 2nd straight Mini Stock win. Marc Dagenais would close out the year with a 2nd place run with Andrew Leroux coming home third which was good enough to secure the title with Tyson Slinger and Justin Jodin rounding out the top five as title contender Jared Galway would cross in 6th.

The regular season is complete and champions are crowned for 2019. The BOS will be back in two weeks-time with the Rycon Electrical Fall Karting Championship on September 14th plus the Monster Enduro on Sunday September 15th. Both are afternoon events. For more information you can check out our website at brockvillespeedway.com and also follow us on Facebook, Twitter and Instagram. Reminder to everyone that tickets and camping are still available for the Loud ‘n’ Dirty Fall Nationals October 18th and 19th. Thanks to all race fans for your continued support during our 2019 regular season.