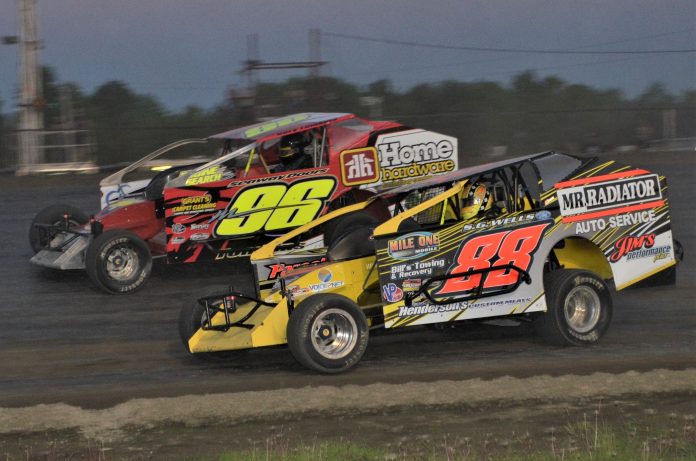 BROCKVILLE, ONT – Even with the twists and turns of a wetter than usual spring, the promotional team at Brockville Ontario Speedway couldn’t deny fans the opportunity to see some of season’s favourite racing, with the next event in the popular Ogilvie’s Auto & Fleet Series for the 1000 Islands RV DIRTcar Modifieds and Sportsman Mods – Saturday, June 29th – at The BOS. Track owner and promoter Paul Kirkland says it was thanks to the sponsors, drivers and teams that allowed the show to be rescheduled.

“Its kind of funny, because even though it’s turned-out to be the second show in the series for this year, its actually the first event,” Kirkland said. “As soon as the weather forecast forced us to pull the plug on what was planned as the Saturday, May 11th 50th anniversary season opener, we started looking for a new date that would allow us to keep this race on the schedule. Thanks to everyone at Polite Sand and Gravel for sharing their sponsorship, we were able to make that happen.”

The line-up will now include 50 lap main events for the Modified and Sportsman-Modified teams, along with the Draper Doors Rookie Sportsman, Street Stock and Outlaw Vintage divisions. Track officials at The BOS have confirmed that ‘The Flying Frenchman’ Ovide Doiron will serve as Grand Marshall for the Saturday, June 29th event.

For complete Brockville Ontario Speedway news and 50th anniversary season schedule information, including details on the season-ending Loud & Dirty Brand Northeast Fall Nationals – October 18th and 19th – be sure to visit www.brockvillespeedway.com. Fans can also find much of the same information by checking the track’s Facebook, Twitter and Instagram social media platforms.