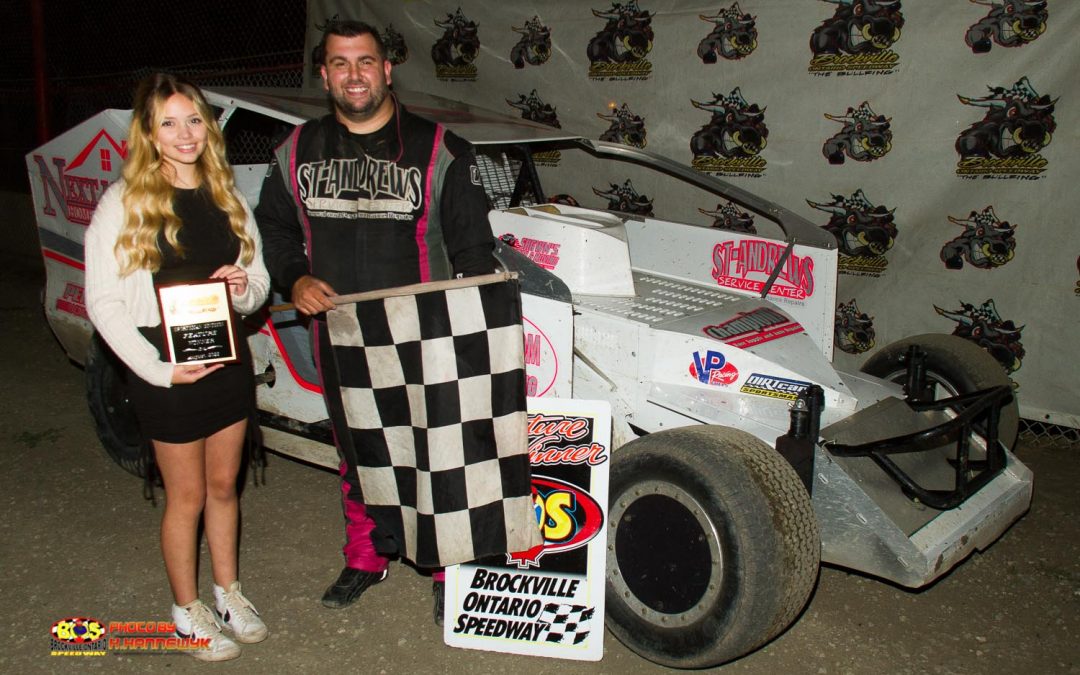 A fast race track this past Saturday at the Brockville Ontario Speedway treated the top stars of the DIRTcar Sportsman North Regional Series for round number three of the four race series. The DIRTcar 358 Modifieds Novice Sportsman and Supernant Truck Shop Mini Stocks were also on hand and put on a fantastic show.

Max Steele was the early leader in the 15 lap Mini Stock feature over Kevin Sabourin and Jarrod Galway. Steele was running away with the feature and appeared to be well on his way to his first ever win. On lap 10 a scary moment took place as Matt Boal, who was running inside the top 5, had his car catch fire in turn two. Boal was able to roll to a stop in front of the fire and safety team. Boal was able to get out of the car and was not injured. On the restart Kevin Sabourin, who was making his season debut, grabbed the lead as Max Steele’s car began to slow with Jarrod Galway and Dakota Boal climbing into the top 3. Sabourin would lead the final 5 laps and hold off defending track champion Jarrod Galway, to claim his first Brockville win over Galway, Dakota Boal, John Lamarche and points leader Jamie Larocque, who came from last after a spin to finish 5th. Earlier in the night Dakota Boal claimed an extra $300 by winning the Supernant Truck Shop, Build It Better Construction and Rob’s Repairs Dash for Cash.

Chris Herbison was the early leader in the 30 lap DIRTcar 358 Modified feature with Terry McClelland and Joe Banks making up the top three early on. Herbison was fast but Kyle Dingwall was on the charge early and made his way to second with McClelland, Joe Banks and Lee Ladouceur there to challenge. On lap 15 Terry McClelland slowed to a stop on the back stretch, bringing out the first yellow at the halfway point. On the restart Dingwall was able to get the lead and begin to author a dominant performance. Chris Raabe, Ryan Arbuthnot and Johnathon Ferguson were also on the charge as they closed in on Herbison for the runner up spot. Raabe was able to get by but still had a long way to go to catch the leader. Over the final 10 laps Kyle Dingwall ran perfect and after winning his first race back on June 4th of this year, the 2012 champion would claim his second win of the season. Raabe held on for second with Johnathon Ferguson slipping by Ryan Arbuthnot for 3rd at the line, while Chris Herbison crossed in 5th.

The third round of the DIRTcar Sportsman North Canada region took the green flag for 50 laps and 2018 Street Stock champion Michael Dillon would lead the early laps over Fire Swamp, Cedric Gauvreau, Dylan Kirkland and Shane Pecore. The lead would be short lived as Swamp was able to take the top spot away with Michael Dillon and Dylan Kirkland staying close by in the top three. On lap 18 Kirkland moved to second and was putting the pressure on Swamp for the race lead. Kirkland would move by for the top spot, while Gauvreau, Swamp, Pecore and Jessica Power were charging hard in the top 5. On lap 30 Cedric Gauvreau would take his turn at the head of the field over Pecore and Kirkland, but 1 lap later Gauvreau would slide off the top of turn 4 allowing Kirkland to retake the number 1 spot as Pecore moved to second and the battle was on. Kirkland and Pecore began to pull away from the field but some new drivers made their way towards the front. Xavier Andrews climbed to third with Bobby Herrington making his way to fourth from his 11th starting spot while Jessica Power continued her strong run in spot number 5. On a restart on lap 39, Shane Pecore would charge by Kirkland for the lead with Bobby Herrington moving to second. These two drivers would pull away in the final laps and settle it amongst themselves. Over the last laps, Shane Pecore ran a perfect race and would drive on to his first Brockville win since June 30th of 2018 and his second overall series win of the year. Herrington crossed in 2nd and would clinch the 2022 DIRTcar Sportsman track championship, while Dylan Kirkland Xavier Andrews and Jessica Power rounded out the top 5.

Holly Denard was the dominant force in the 12 lap Novice Sportsman feature. Denard took the lead away from early pace setter Jordan Wood with points leader Shawn Hodge running third. Denard would pull away to a comfortable lead as Shawn Hodge got by Wood for second but had some work to do to catch the leader. As the laps clicked off Holly Denard would go unchallenged to claim her second win of the season. Hodge crossed the line second over Matt Pruner, last weeks winner Paul Donnelly and Marco McCarthy.

Next week track champions in all divisions will be claimed as it is final points night for the DIRTcar 358 Modified, DIRTcar Sportsman, Novice Sportsman, Supernant Truck Shop Mini Stock and Street Stock. Racing begins at 7pm. For updates, stay tuned to our website at brockvillespeedway.com and for instant updates, be sure to give the speedway a follow on Facebook, Instagram and Twitter 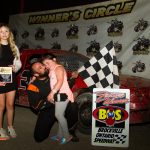 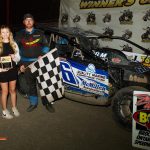 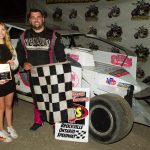 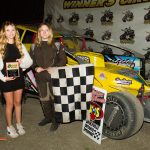