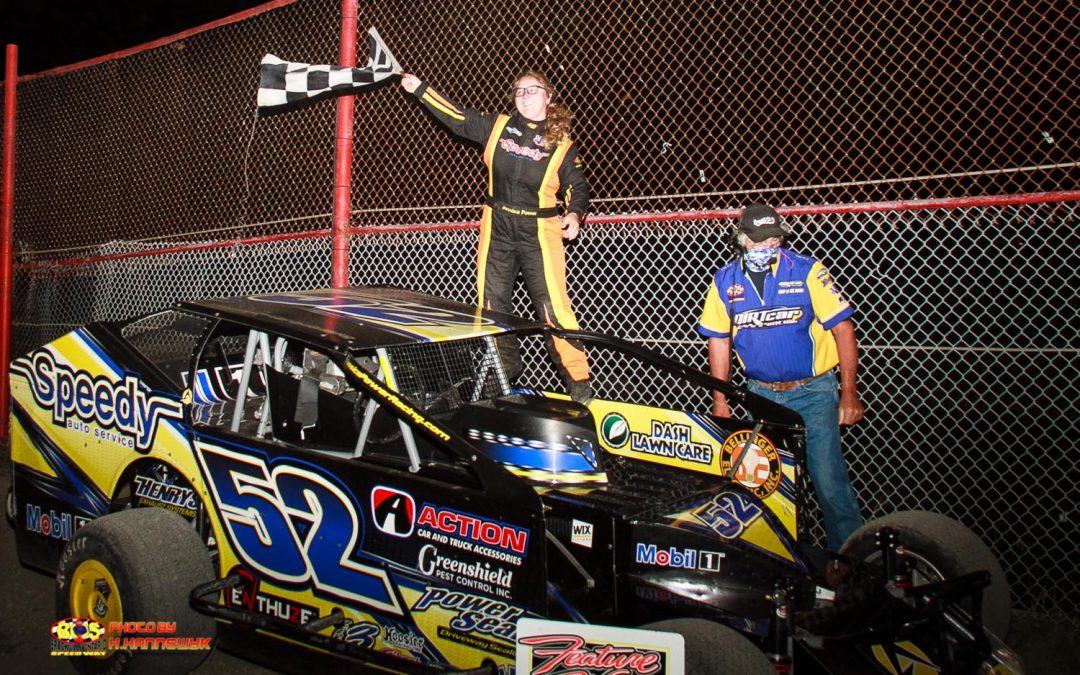 The third event of the 2020 season sponsored by Natures Reality and Polite Sand and Gravel at the Brockville Ontario Speedway, saw intense racing and a few familiar faces in the winners circle this past Saturday night. With no points on the line it was all about getting the checkered flag and drivers we doing what they had to do to get it.

The 35 lap 358 Modified feature saw a variety of invaders along with local favorites. Perth Ontario’s Corbin Millar and Quebec stand out Steve Bernier paced the field with Millar getting the best of Bernier for the lead. The two battled side by side with Bernier getting the advantage at the end of lap 1 with Mat Williamson, Gary Lindberg and Ryan Arbuthnot giving chase. Bernier had a fast car and would lead the opening 5 laps until a quick yellow flew as Pete Bicknell slowed with a problem on the backstretch, which bunched up the field for a restart. When the green flew it was Bernier again in control but Mat Williamson was on his back bumper and putting on the pressure for the lead. Over the next 20 laps Bernier and Williamson put on a great show changing lanes at either end of the speedway while behind them Ryan Arbuthnot and Gary Lindberg staged a great battle for 3rd and 4th while Millar continued his strong night completing the top 5. Bernier used the bottom lane and continued to lead as Williamson tried at will to make something happen on the top side but could not get by the leader. On lap 26 Joe Banks slid off turns 3 and 4 bringing out the yellow. When the green flew it remained Bernier, Williamson and Lindberg in the top 3 with Arbuthnot 4th and Chris Herbison would make an appearance into the top 5 and tried to run down Arbuthnot for 4th. As the laps wound down and traffic came into play Bernier and Williamson continued their battle for the lead. Despite several attempts to get by for the top spot, Steve Bernier proved to be too strong holding off the defending Super DirtCar Series Champion to claim his first ever Brockville 358 Modified win. Williamson settled for a hard-fought 2nd place run over Gary Lindberg, Ryan Arbuthnot and Chris Herbison.

Gabriel Cyr notched his first career win a year ago at Brockville and he was determined to claim another one as he led early in the 25-lap event over Johnathon Ferguson and Jessica Power. These three drivers were the dominant forces early on in the opening 5 laps before the yellow flew for Evan Reynolds who was running in the 4th spot, lost the handle off the backstretch and the yellow flew. The 2019 Rookie Sportsman Champion returned for a 7th place finish. On the restart it was Cyr in control again but Jessica Power made her way forward as she battled Ferguson for 2nd with Brent Kelsey and Xavier Andrews completing the top 5. After a spirited battle Power was able to clear Ferguson and set her sights on the race leader. As the laps clicked off the handling on Cyr’s race car began to go away which allowed Power to get within striking distance. On lap 18 the great top 5 run for Brent Kelsey came to an end as he broke the front end on his race car, and the yellow flew again. When the green flew it was still Cyr in control while Power and Ferguson remained close, waiting for the leader to make a mistake. With 5 laps remaining Cyr’s car developed a push in turns three and 4 and Power closed quickly, and the battle was on. Coming to the white flag Cyr pushed wide in turn 4 as Power took advantage and led at the line by a half car length. Power was able to clear Cyr down the backstretch and never looked back and after spending the last few seasons competing at Fulton Speedway on Saturday night, she returned to victory lane for the first time since June 22nd of 2013 in the Sportsman division at Brockville. Cyr held on for 2nd over Ferguson, Jarrett Herbison and Xavier Andrews.

The biggest field of the evening saw 20 Vintage Modifieds come to the green flag for a 25-lap feature. From the drop of the green flag two drivers who have been dominant in the Vintage class, Jason Powers and Randy Gaudet, made a statement as the took the top two spots in the early going. Powers and Gaudet pulled away from the field until lap 9 when the yellow flew for Brandon Gregory as he spun off the back stretch. Gregory would recover for a 9th place finish. On the restart no change as Powers and Gaudet remained in the top 2 spots with Tim McColman, Matt Barbour and Pete Stapper completing the top 5. Powers would be the first to catch lapped traffic which played right into the hands of Gaudet as he charged to the high lane and would lead by a half car length near the half way point. Powers would rally back through the traffic and hold off Gaudet while Tim McColman Matt Barbour and Pete Stapper continued their battle for top 5 positions. On lap 22 The leaders encountered heavy traffic and Randy Gaudet saw the opportunity and made a big move to clear the traffic and take the lead in the process. Gaudet would charge on to his first ever Vintage win at Brockville and third overall, adding to his two Cornwall victories this season. Jason Powers would cross in 2nd with Matt Barbour claiming third over Tim McColman and Pete Stapper.

Cameron Lane would lead at the start of the 15 lap Rookie Sportsman feature over Michael Delormier, Bentley Gray, Fire Swamp and Stephane Fournier. Lane would lead the opening three circuits before Delormier would make the pass for the lead and try to run away from a quality field. On lap 4 a tangle in turn 4 involving Fournier and Trent Wallace, who was making his debut, saw the yellow fly and both drivers head to the pits with heavy front-end damage. Back at the front when the green flew it was still Delormier and Swamp leading the field with Bentley Gray, Andrew Young and Cameron Lane completing the top 5. Delormier had a fast car and was looking to make the final laps go by fast but Nathan Lambert would bring out the final yellow on lap 11 as he hit a tire in turn 1 and destroyed the front end on his car. Lambert was towed back to the pits. On the final restart Fire Swamp tried to keep pace but Michael Delormier was too strong as he marched on for his 2nd straight Rookie Sportsman win. Swamp held on for 2nd over Bentley Gray, Andrew Young and Blayden Arquette.

The Mini Stock 15 lapper almost started with a crash and ended up becoming one of the best saves in recent memory. Teddy Baird led the way with Yan Potvin close behind, as the field headed into turn three the top two drivers made contact causing Baird to turn completely sideways and some how was able to save it and only lose the top spot as Potvin snuck by for the lead. Potvin’s lead was short lived as he suffered damage after the contact on the opening lap and was forced to the pits. Baird took over the top spot on lap 6 but Jamie Larocque and Jarrod Galway closed quickly to try and get by Baird for the lead. On lap 12 the lead battle would end as Baird and Larocque came together in turns three and four ending their shot at victory, as the yellow flew. On the final restart Jarrod Galway would make the most of this opportunity as he would lead the final laps and hold off new comer Ian Reid by a car length to record his first win of the season. Reid claimed his best ever finish of 2nd with Curtis Lindsay, Dave Watchorn and Mark Packer completing the top 5.

In Street Stock the 15-lap feature was dominated by Todd Raabe and Shawn Hodge as they battled hard in the opening laps for the lead with Jeff Bode completing the top 3. Hodge was in search of his first career win while Raabe was looking to make it two in a row in the Street Stock ranks. Hodge would battle hard but on lap 11, would suffer a right rear flat tire which ended his shot at a possible first career win. From there it as no contest as Todd Raabe cruised to a dominant win over Jeff Bode and Bob Simpson.

The Brockville Ontario Speedway continues with regular Saturday night racing next week as the Sportsman division will head line the night along with Rookie Sportsman, Street Stock, Mini Stock and the 1000 Islands RV Crate Sprint Cars. For further information on how to get tickets stay tuned to brockvillespeedway.com and follow us on Facebook, Twitter and Instagram. 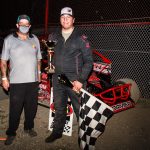 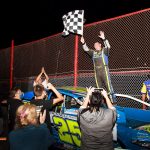 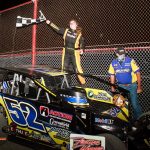 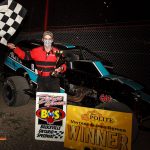 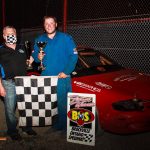 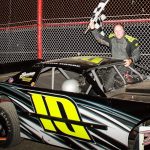