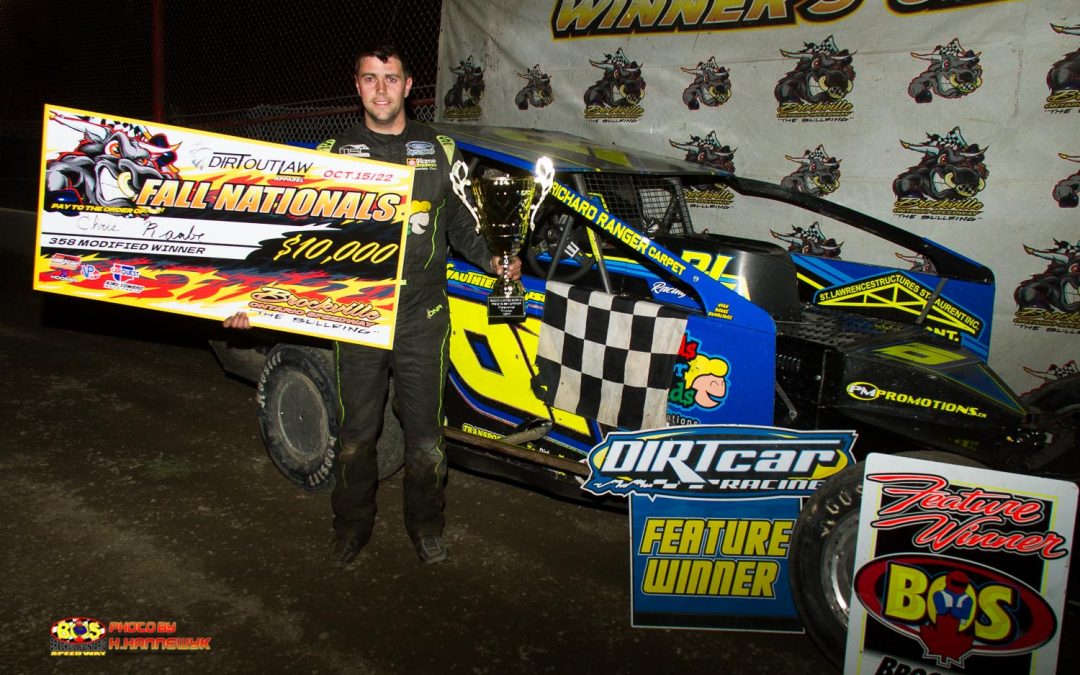 The finale of the 2022 Dirt Outlaw Apparel King Edward Auto Parts Fall Nationals presented by St. Lawrence Radiology, saw another great day of racing action this past Saturday. $10,000 was on the line for DIRTcar 358 Modified Series and a championship along with a title on the line for the DIRTcar Sportsman Series.

The Mini Stocks kicked off the feature racing with plenty of cautions flags to start the event. Justin Jodoin, former Cornwall Speedway Mini Stock Champion, was the early race leader over Brighton Speedway regulars Tommy Bailey and Aiden Fletcher. Brockville Speedway regular Hayden Brown was also in the mix and would put pressure on the leader. Jodoin would have problems with his car ending his shot at victory, which handed the lead over to Hayden Brown. Despite several challenges from the Brighton invaders, Hayden Brown was not to be denied as he marched to his second straight fall nationals win in the Mini Stock division. Aiden Fletcher held on for second with Kevin Sabourin making a charge to third over Tommy Bailey and 2022 Brockville Speedway Mini Stock Champion Jamie Larocque.

The DIRTcar 358 Modified Series was set to go for 100 laps, $10,000 and a DIRTcar 358 title as well. Dave Marcuccilli needed to stay out of trouble to try and hold off Lance Willix to claim his first series title. Chris Raabe and David Hebert would battle it out in the opening laps of the race with Tim Fuller, Luke Whitteker and JF Corriveau right there to challenge. The top 2 drivers would pull away from the field on track that saw multiple grooves, allowing for some great racing. On lap 30 Hebert would start to edge in front over Raabe as Fuller closed quickly making it a three-car battle for the lead. On lap 46 the great run for Hebert ended with a scary incident, as fire erupted in the car while leading. The former Fall Nationals champion would quickly get the car stopped and climb out unhurt. On the restart it came down to Fuller and Raabe for the lead with Raabe in command as he drove away. Behind Fuller, Erick Rudolph was making his way to the front from 11th, while Luke Whitteker and Corey Wheeler completed the top 5. The leaders entered traffic with 20 laps to go which helped close the gap between Fuller and Raabe while Wheeler and Rudolph would try to close in. Lance Willix was also making his way forward coming from 16th starting spot to 5th. Dave Marcuccilli was doing what he had to do to hold on to his points lead, as he ran just inside the top 10 in the closing laps. Over the final laps Chris Raabe pulled away as Tim Fuller and the rest of the field would have to wait to go to victory lane another day. Raabe would go on to collect his 2nd series win of the year, his 5th Brockville win of the season, a weekend sweep and $10,000. Tim Fuller Corey Wheeler Ryan Arbuthnot and Lance Willix rounded out the top 5. Dave Marcuccilli would finish 12th, good enough to claim his first DIRTcar 358 Modified Series championship.

Cody McPherson and Zach Sobotka came into the evening 16 points apart in the chase for the 2022 DIRTcar Sportsman Series title. McPherson was looking for his 2nd title while Sobotka was looking for his first but everyone was looking to beat Brockville champion Bobby Herrington on this night. Jessica Power led the field to green at the start of the 50-lap contest with a new power plant under the hood over Cedric Gauvreau, Sam Charland, Bobby Herrington and Zach Sobotka. Gauvreau would jump to the high side and take over the top spot with Sam Charland and Bobby Herrington challenging Power for the runner up spot. Herrington would make his charge to the front as he moved to second and on lap 16. Herrington would use the inside lane to grab the lead away and begin to author a dominant performance, however Sam Charland would something to say about that. On a lap 34 restart Charland would find the outside lane to his liking as he charged alongside of the two-time track champion but Herrington was able to stay in control of the lead as he held off Charland’s bid for the number one position. With 10 laps remaining the championship battle was close on track as Sobotka continued his great run in third but title rival Cody McPherson was right there with him in 4th and both drivers had a good chance to win the race. Over the final laps, Bobby Herrington proved to be too much for Sam Charland and the rest of the field as he marched to his 10th win in 20 events at Brockville this season and his 7th win in 8 fall events locally. Sam Charland claimed 2nd over Zach Sobotka, Cody McPherson finished 4th which was more than enough to claim his 2nd DIRTcar Sportsman Series title with Cedric Gauvreau finishing 5th.

The DIRTcar Pro Stocks closed out the season with a 30-lap contest and a pair of veterans would chase a driver who is new to the division. Former Mini Stock competitor Thomas McDonald would show the way early on over Denis Gauvreau, Kevin Fetterly Jr, Blayne Nichols and Adam Turner. McDonald would lead the first 14 laps until Gauvreau took control of the race with Fetterly right there with him in 2nd. A few laps later McDonald would spin his car while running third. On the restart Fetterly would fend off Gauvreau for the lead with Nichols up to third. Over the final laps the 5-time Brockville Speedway Street Stock champion would go unchallenged as he claimed his first DIRTcar Pro Stock victory at The BOS. Gauvreau would hold on to second with Blayne Nichols, Thomas McDonald and Adam Turner completing the top 5.

The 2022 season at the Brockville Ontario Speedway is now complete and off-season preparation is already underway in anticipation for the 2023 campaign. The staff and management at The BOS would like to thank the sponsors, the teams and drivers for helping make this season a success. But most importantly the biggest thanks go out to the dedicated race fans who were with us throughout the 2022 season. We wish everyone a great holiday season and look forward to seeing everyone back and ready to go for 2023. 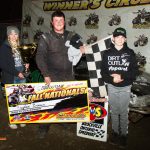 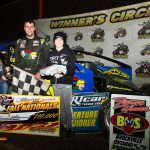 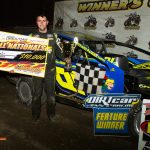 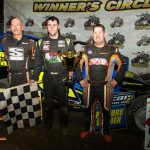 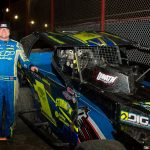 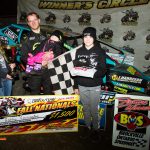 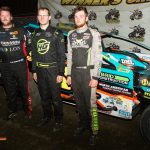 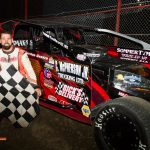