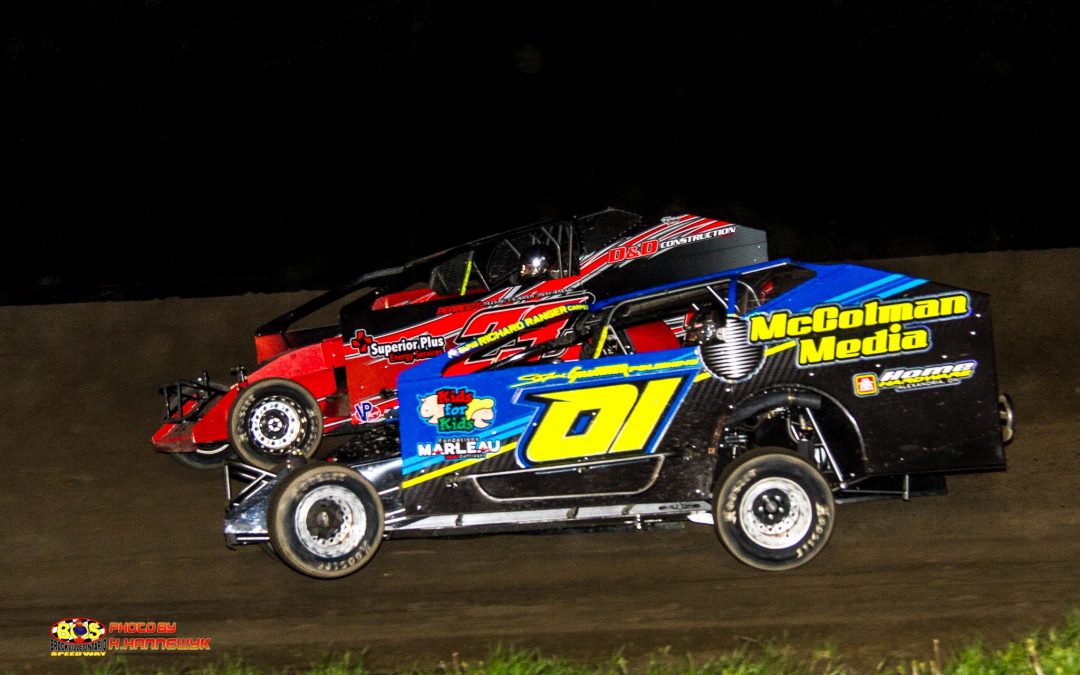 (BROCKVILLE,ON) There may have been threatening weather in the region Saturday night and yes, Mother Nature provided some moisture to the Brockville Ontario Speedway before the races. Track crews were able to work that in which made for some wild action on the evening.

Jeff Sykes was the early leader at the start of the 30 lap DIRTcar 358 Modified feature with Raabe, Madison Mulder, Chris Herbison and Ryan Arbuthnot giving chase. Sykes would remain the leader until lap 9, when Raabe took advantage of a small mistake by Sykes to grab the lead. Last weeks winner Ryan Arbuthnot was on the move as he charged to 2nd and was looking for back to back wins. On lap 16 Arbuthnot’s great run ended as he hit tire in turn two, breaking the front end. On the restart Raabe once again would take the lead with Madison Mulder and Chris Herbison looking for a way to catch him. On this night, a fast race track and a good handling race car would finally get Chris Raabe a DIRTcar 358 Modified feature win at “The BOS”. Madison Mulder would hold off Chris Herbison for 2nd with Tristan Draper and Even Racine finishing out the top 5.

The 25 lap DIRTcar Sportsman feature saw defending track champion Bobby Herrington take the lead at the drop of the green flag with Josh Powers and Andrew Young close behind. Herrington had a dominant season last year and was strong in the early laps. On lap 6 a three car tangle brought out the first yellow flag of the race for a tangle with Jamie Young, Trent Wallace and Dale Gifford. When the green flew it was Herrington in control as he once again charged to a big lead, over Andrew Young and Josh Powers. Young had a great car but his luck would change just past the halfway point. On a lap 17 restart Young got loose in turn 1 and spun out, Brennan Moore tried to avoid but got into Young and flipped over in turn two. Moore would get out uninjured, while Young would return to finish 12th. On the final restart Bobby Herrington drive away and score win number one of the season, over Shane Stearns, Cedric Gauvreau, Dan Ferguson and Tyler Stewart, who came from 14th to 5th.

The action was wild in the 15 lap 1000 Islands RV Crate Sprint Car feature. Local driver Matt Billings led the way early over Bryan Cloutier and Ryan Poole. On lap 4 the first of two red flags flew as Ashton VanEvery flipped his car in turn 4, but would get out without injury. Billings would continue his great run after the restart, however behind him, things would take a bad turn. On lap 11 rookie Tim Bailey would slam into an infield tire in turn 1, sending him across the track right in the path of Jeffrey Weare. Both drivers flipped and the red flag returned. Safety crews arrived on the scene quickly and both Weare and Bailey would walk away uninjured, but the cars were destroyed. After that Matt Billings would close out the final 4 laps to score his first win of the season in his first start of the year. Bryan Cloutier and Lee Ladouceur would complete the podium.

Jordan Wood used the pole position to grab the lead at the start of the 12 lap Novice Sportsman feature. Last weeks winner Sandy MacFarlane would charge through the field and close in on the leader and take over the top spot, as he was looking for his second win in a row. MacFarlane would take over the lead on lap 5, as he had a strong race car all night long. Despite a late charge from Nathan Lambert and Shawn Hodge, Sandy MacFarlane would go back to back to start the Novice Sportsman season. Lambert held on for 2nd with Shawn Hodge claiming his second straight podium finish.

Marc Dagenais was dominant in the early laps of the Supernant Truck Shop Mini Stock feature event with Marc Supernant and Max Steele completing the top 3. On lap 6 Dagenais would go off the track in turn 3 and 4, bringing out the yellow. Dagenais would head to the pits but would not return. This put Marc Supernant in the lead but on the restart, Supernant would get turned by Hayden Brown in turn 2 and the yellow flew again. This left Dakota Boal in the lead with Jamie Larocque there to challenge. The top two had great cars with Boal looking for his first ever win. A caution flew on lap 13 setting up a two lap dash to the finish. Boal would lead on the restart but he slipped wide and opened the door for Larocque to get by. On this night, the dry spell would come to an end, as Jamie Larocque would claim his first win since August 3rd of 2019 at Brockville. Dakota Boal would cross in 2nd with Hayden Brown completing the podium.

Victoria Day Monday the conclusion of the 2021 Dirt Outlaw Apparel/Kings Edward Auto Parts Fall Nationals will take place. Pit gates will open at 1pm with driver check in taking place. Hot laps begin at 4pm with the first qualifying heat of the night starting at 5pm.