Redemption Is Sweet For Chris Herbison With Big Win at Brockville 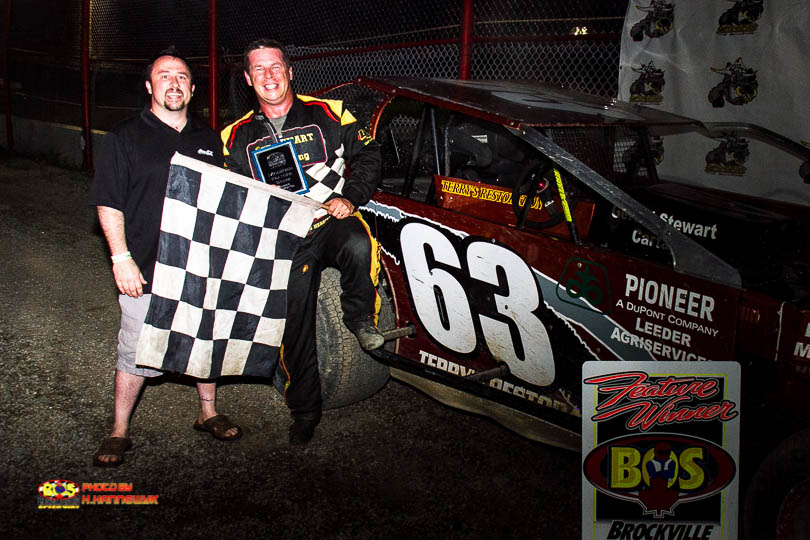 1 week ago while running 2nd Chris Herbison tagged an infield tire ending what was shapng up to be a perfect night. On Saturday night with Coca Cola and BOB FM on hand Chris put it all together, held off Danny O’Brien and claimed his first win of the year in the 358 Modifieds. Ryan Scott ended a year and a half drought with a win in Sportsman, Dave McDonald scored his first Rookie Sportsman checkered flag, Tyler Bushey scored big in Street Stock, Dustin Bode won for the 2nd time in Mini Stock and Pete Stapper took the win in Vintage.

The 358 Modifieds were set and ready to go for 30 laps and Jeremy LaSalle was ready as he charged into the lead over Chris Herbison, Ryan Poole, Luke Whitteker and Stephane Lafrance. LaSalle had a fast race car and was flying around the top lane while Herbison, Whitteker and Lafrance all tried to keep pace. The first caution flew on lap 11 bunching the field back up for a restart. When the green flew it was Chris Herbison taking the top spot but Jeremy LaSalle would charge back around the top side to regain the lead and begin to pull away. With 10 laps to go LaSalle appeared to be on his way to his first ever win. Chris Herbison had other ideas as he patiently ran down the leader and began to make his move. On lap 23 Herbison made the pass for the lead bringing Whitteker to 2nd and points leader Danny O’Brien who charged from 13th to 3rd with LaSalle and Lafrance making up the top 5. On lap 26 Jeremy LaSalle made an error in turn 3 as he slid off the turn ending a great run. When the green flew Herbison took the lead but Danny O’Brien was on the charge taking 2nd from Whitteker and was on the charge for the lead. On the final lap O’Brien made the move to the top side but Herbison also went to the top lane but O’Brien immediatley charged low pulling even with Herbsion heading into turn 3. On the final turn Herbison carried the momentum up high and held on by a half car length for the win. O’Brien scored his 3rd straight runner up finish over Whitteker, Lafrance and Bobby Herrington.

The Sportsman saw a rough start to the 25 lap event with Jarrett Herbison, Josh Kirkland and defending track champion Shane Pecore all experiencing mechanical issues. When the laps started to click off Derek Cryderman paced the field early on over Tristan Draper, Ryan Scott, Johnathon Ferguson and Xavier Andrews. On lap 5 Draper started to go to work as he charged by Cryderman on the bottom to take over the top spot bringing Ryan Scott and Johnathon Ferguson with him to the top 3. On lap 9 Mike Beyore slowed to a stop on the front stretch setting up a restart. When the green flew Draper remained in the lead but Ryan Scott was looking to end a long winless drought and was on the move. The Kingston native took over the lead bringing Ferguson to 2ndand Jesse Hudson to the number 3 spot after starting 15th. From this point on Ryan Scott would turn in a dominant performance as he pulled away by over a straight away in the final laps but behind him Jesse Hudson Dylan Evoy and Jason Shipclark were in a tight battle for a top 5 spot. In the end Ryan Scott was in charge as he dominated for his first win of the 2017 season. Johnathon Ferguson came home 2nd over Hudson, Dylan Evoy and Jason Shipclark.

In Street Stock Michael Dillon set the pace early on over Tyler Bushey, Keith Riddell, Steve Brady and Sheldon Hoogwerf. On lap 3 Tyler Bushey was up on the wheel and charging hard as he got by Dillon on for the lead and began to pull away fro the field. On lap 5 the caution flew for an accident in turn 4 involving Keith Riddell, Sheldon Hoogwerf and Steve Brady. Both Riddell and Hoogwerf were able to pull away with minor damage but Brady was done for the night. When the green flew Bushey continued to lead but Todd Raabe was also on the move from his 8th starting spot. Raabe would take 2nd from Dillon and put on a great battle with Bushey over the remaining laps. After winning his first feature 2 weeks ago Tyler Bushey held off multiple challenges from Raabe using the outside lane and would march to his 2nd win of the year with Raabe close behind in 2nd, Michael Dillon, John Calgey and Sheldon Hoogwerf rounded out the top 5.

In Rookie Sportsman Dave McDonald led early and was looking for redemption after a heartbreaking loss on the final lap 1 week ago. Behind him Alex Gagnon and Dale Gifford were doing all they could to close in and take the top spot away. At the halfway point McDonald had over a straightaway advantage but Gagnon was on the move. Over the final 5 laps Gagnon would run down the leader but would run out of laps as Dave McDonald would go on to score his first ever Brockville win over Alex Gagnon, Dale Gifford, Kelvin Lalonde and Joey Paquette.

Outlaw Vintage Modifieds are always popular with the fans and Luke McKinnon was trying his best to get to victory lane as he led the opening 3 laps over Wayne Riddell, Ryan Comeau, Brian Comeau and Jake McNamee. The first yellow flew on lap 6 as Wayne Riddell made hard contact with the front stretch wall slowing to a stop in turn 1. When the green flew Brian Comeau would take over the lead but Pete Stapper was on the charge moving into 2nd with McKinnon in 3rd. In the closing laps the top 3 were having a great battle but Luke McKinnon’s great run came to an end as he spun in turn 1. On the final restart Brian Comeau took the lead but Pete Stapper made a great move taking over the top spot on the final lap and would hold on by a car length to record his first win of the year over Brian Comeau, Matt Barbour, Jake McNamee and Ryan Comeau.

The Mini Stock division is always exciting and they did not dissappoint on this night either as John Lemarche took over the lead at the start of the 15 lap contest. Behind the leader Chris Bakker was on the charge taking over 2nd with Dustin Bode, Jarrod Galloway and Mark Packer completing the top 5. On lap 5 Bakker took over the top spot bringin Bode with him to 2nd with Galloway, Lemarche and Mike Best making up the fast 5. Both Bode and Bakker would pull away from the field and put on a fantastic show for the win. Dustin Bode would slip by on the outside lane with 5 laps to go and would pull away from everyone in the closing stages to collect his 2nd win in 4 weeks. Chris Bakker came home 2nd with Jarrod Galloway 3rd, Brighton Speedway regular Tyler French crossed in 4th with John Lemarche completing the top 5.

A reminder to all race fans that camping spots for this year’s 1000 Islands RV Northeast Fall Nationals are available and Tickets are also available for the Canada Day Ogilvie’s Auto and Fleet Quad Crown Series event. The more you buy, the more you save. Next week Ontario Rental Supply will be on hand for a full program in all 5 classes with gates opening at 5pm, the first green flag drops at 7 pm. 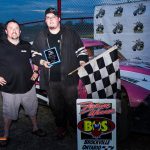 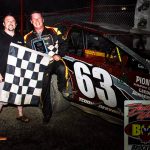 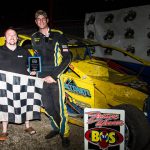 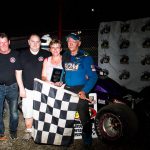 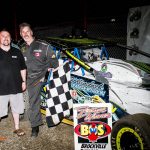 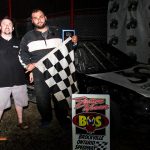