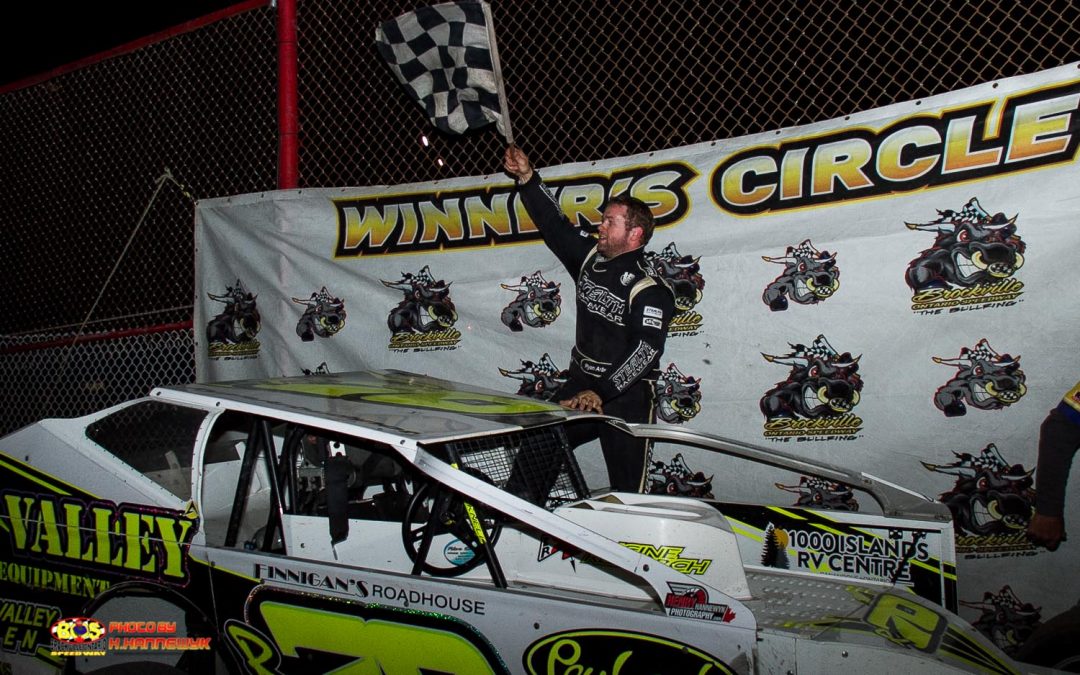 BROCKVILLE, ON – It was another hot night of racing this past Saturday night at the Brockville Ontario Speedway as round two for the Ogilvie’s Auto and Fleet Triple Crown Series for the 1000 Islands RV 358 Modified and Sportsman divisions took center stage. A fast race track provided the fans with some exciting racing all evening.

2017 track and series champion Luke Whitteker set the pace in the early laps of the 1000 Islands RV 358 Modified feature over Ryan Poole, Jordan McCreadie, Ryan Arbuthnot and Tim O’Brien. A pair of early yellows would slow the pace but when the green flew Luke Whitteker knew he had a great race car and was flying around the high lane as behind him current track point leader Ryan Arbuthnot was on the move as he took over position number two on lap 8 and began to run down the leader. On lap 10 after a quick yellow flag Ryan Arbuthnot, despite being fast on the top side was able to use the bottom lane on a restart to grab the lead away as Whitteker tried his best to keep pace. Despite a fast, outside line Arbuthnot was not able to pull away but still maintained a slim two car length lead as behind the top two Jordan McCreadie, Tim O’Brien and Ryan Poole were having their own battle in the top 5. Several mid race cautions slowed the pace of the event but Arbuthnot and Whitteker remained up front and in control using the fast, outside lane to hold the top two positions. With the top two spots being controlled by Arbuthnot and Whitteker, Tim O’Brien and Jordan McCreadie were still trying to decide on third and fourth as Cornwall Speedway invader Corey Wheeler completed the top 5. With 5 laps to go traffic came into play but Ryan Arbuthnot would play it perfect on this night, despite several attempts by Luke Whitteker, it was not meant to be. Ryan Arbuthnot would charge to his 5th win of the year and 2nd in a row in the Ogilvie’s Series over Luke Whitteker, Kyle Dingwall overcame early race issues to charge back to third, Jordan McCreadie and Tim O’Brien would complete the top 5

On the Sportsman side of the Ogilvie’s Triple Crown Johnathon Ferguson had a dominant car throughout the evening and would charge to the lead in the early going over last week’s winner Dan Ferguson, Shane Stearns, Jonah Lewis and Jon Mills. Johnathon would rocket to over a straight away lead by lap 5 until the yellow flag flew as Dale Gifford made heavy contact with an infield tire in turn four. When the green flew it Johnathon and Dan Ferguson continuing to lead with Johnathon getting the better of the two drivers and would once again build up a near straight away lead using the extreme outside lane. With 15 laps in the books Johnathon Ferguson was in a league of his own as he held nearly a half track lead while behind him Dan Ferguson, Jon Mills, Shane Pecore and Jason Shipclark were battling hard for a top 5 position. Shane Pecore managed to make his way forward as he followed Jon Mills past Dan Ferguson to charged to third, then ran down Mills for the number two position. On lap 38 Pecore would take over the 2nd spot but still had a long way to go to catch leader Johnathon Ferguson, who was navigating traffic perfectly on this night. On lap 39 the yellow flew setting up a restart that would change things for Dan Ferguson and Jon Mills. When the green flew Johnathon Ferguson took off with Pecore in tow but Dan Ferguson and Jon Mills became hooked together and both drivers spun collecting Tyler Reynolds and the yellow flew. All drivers would restart at the rear except for Mills who suffered damage and saw a top 5 run slip away. When the green flew Johnathon Ferguson would jump out to the lead and even with Shane Pecore giving chase, The Prescott Ontario native would remain in control and drive away to grab his third win of the season and 2nd in the last three weeks. Shane Pecore grabbed his 2nd runner up finish of the year over Jason Shipclark, Jarrett Herbison recovered from and early race spin to finish 4th with points leader Ryan Scott crossing in 5th.

The 15 lap Mini Stock feature always provides great racing and John Lamarche was back aboard his machine to try and claim his first ever win but Jamie Larocque would be right there to challenge through the opening laps. After a fierce battle at the front of the field Larocque would claim the lead but two-time runner up Hayden Brown would follow through to take 2nd with points leader Andrew Leroux completing the top 3. As the laps clicked off it was a great battle among Larocque and Brown for the win and it would come down to the final laps. On the white flag lap Hayden Brown drove his car deep into turn one and would make it close using the bottom lane. But Jamie Larocque would keep the momentum up on the top side and would not be denied scoring his 2nd win in a row after a rough start to 2019. Hayden Brown recorded his third runner up finish on the year over Andrew Leroux, John Lamarche and Jared Galway.

In Draper Doors Rookie Sportsman-action it was Kalen Draper taking command of the 15-lap event early on over karting rivals, Evan Reynolds and Tyler Stewart. These three drivers would put on a show but Draper would pull out to a comfortable lead leaving Reynolds and Stewart to fight it out for 2nd and it was a hard-fought battle. On lap 9 the two drivers would make contact with Stewart taking evasive action to the infield and the yellow would fly. On the restart Draper would claim the lead but he had new challengers in the form of last year’s Mini Stock champion Domonick Merkley and opening day winner Terry McClelland. Over the final laps Merkley would make it close but Kalen Draper would hold on and finally score his first ever Draper Doors Rookie Sportsman feature win. Domonick Merkley would cross a very close 2nd with Evan Reynolds recovering from the lap 9 tangle to complete the top 3.

The Street Stock 15 lap event saw points leader Michael Dillon take the lead away early on over Peter Raabe and Tyler Bushey. A great battle took place among the top 5 drivers all race long but on lap 11 Nick Merkley and Peter Raabe tangled as they battled for 3rd on lap 11. Merkley suffered heavy front-end damage while Peter Raabe also saw a top 5 effort slip away with a flat right rear tire. On the restart Dillon remained in front but two-time track champion Tyler Bushey would be there to challenge for the lead and would get by with two laps remaining bringing Todd Raabe to position number two. On the final lap Todd Raabe would make it close and even make slight contact off turn four but Tyler Bushey would hold on for his 2nd win of the season over Todd Raabe, Michael Dillon, Keith Riddell and Shawn Hodge.

Next week the Lucas Oil Empire Super Sprints invade the Brockville Ontario Speedway with a full program for the 1000 Islands RV 358 Modifieds, Sportsman, Draper Doors Rookie Sportsman, Street Stocks and Outlaw Vintage. Racing as always begins at 7pm. For everything that is happening at “The BOS” be sure to check out our website at brockvillespeedway.com and give us a follow on our Facebook, Twitter and our new Instagram page for the latest breaking news. 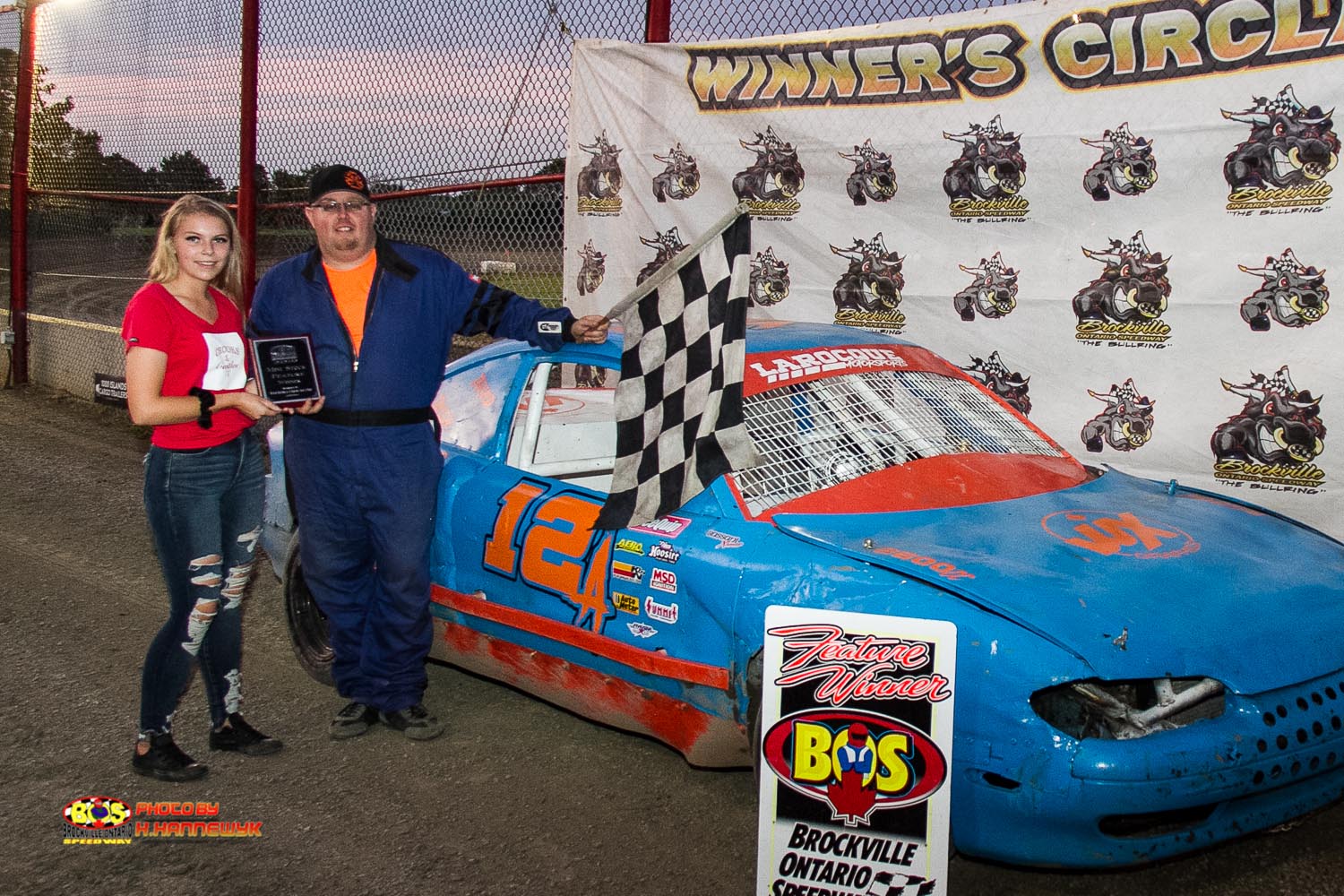 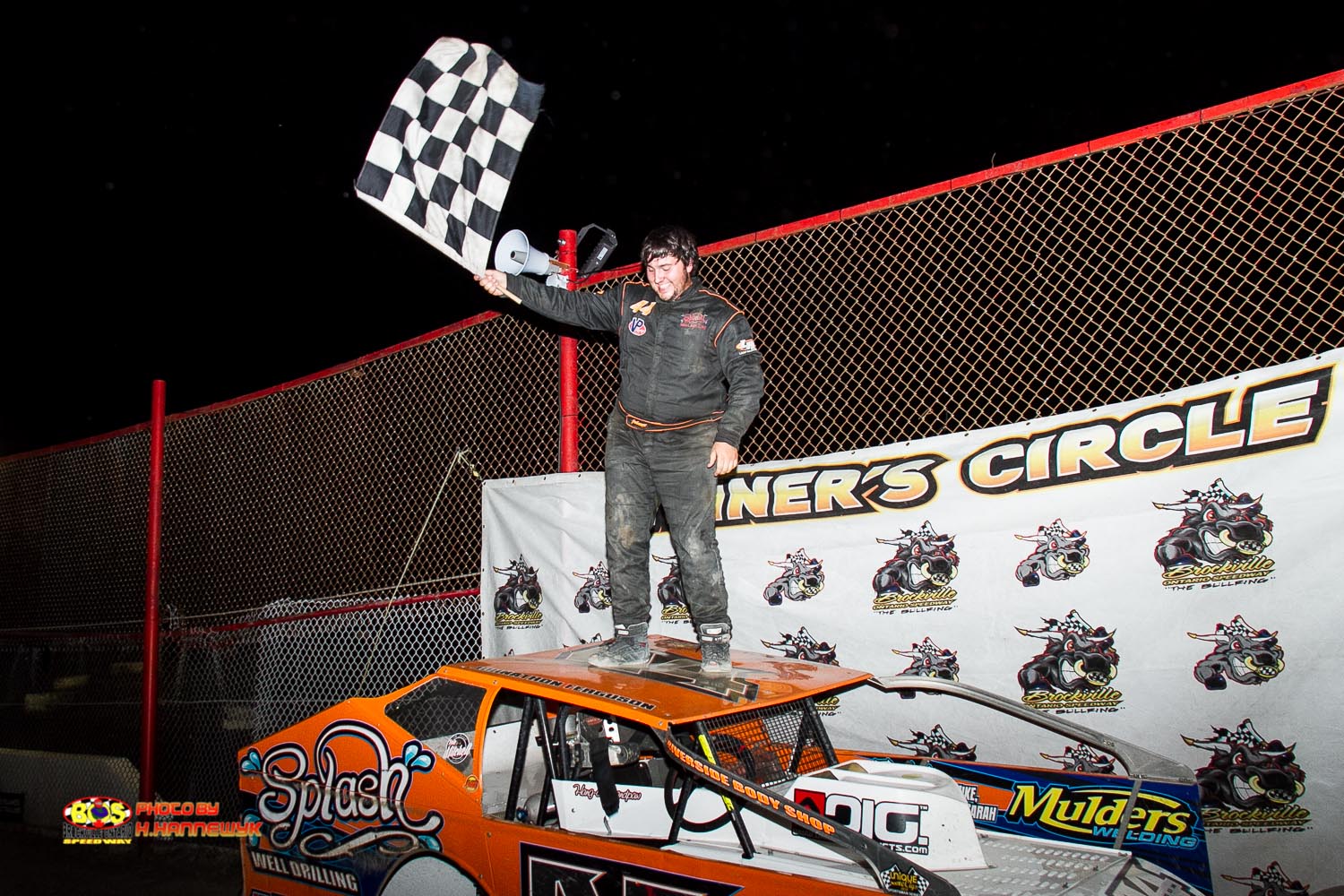 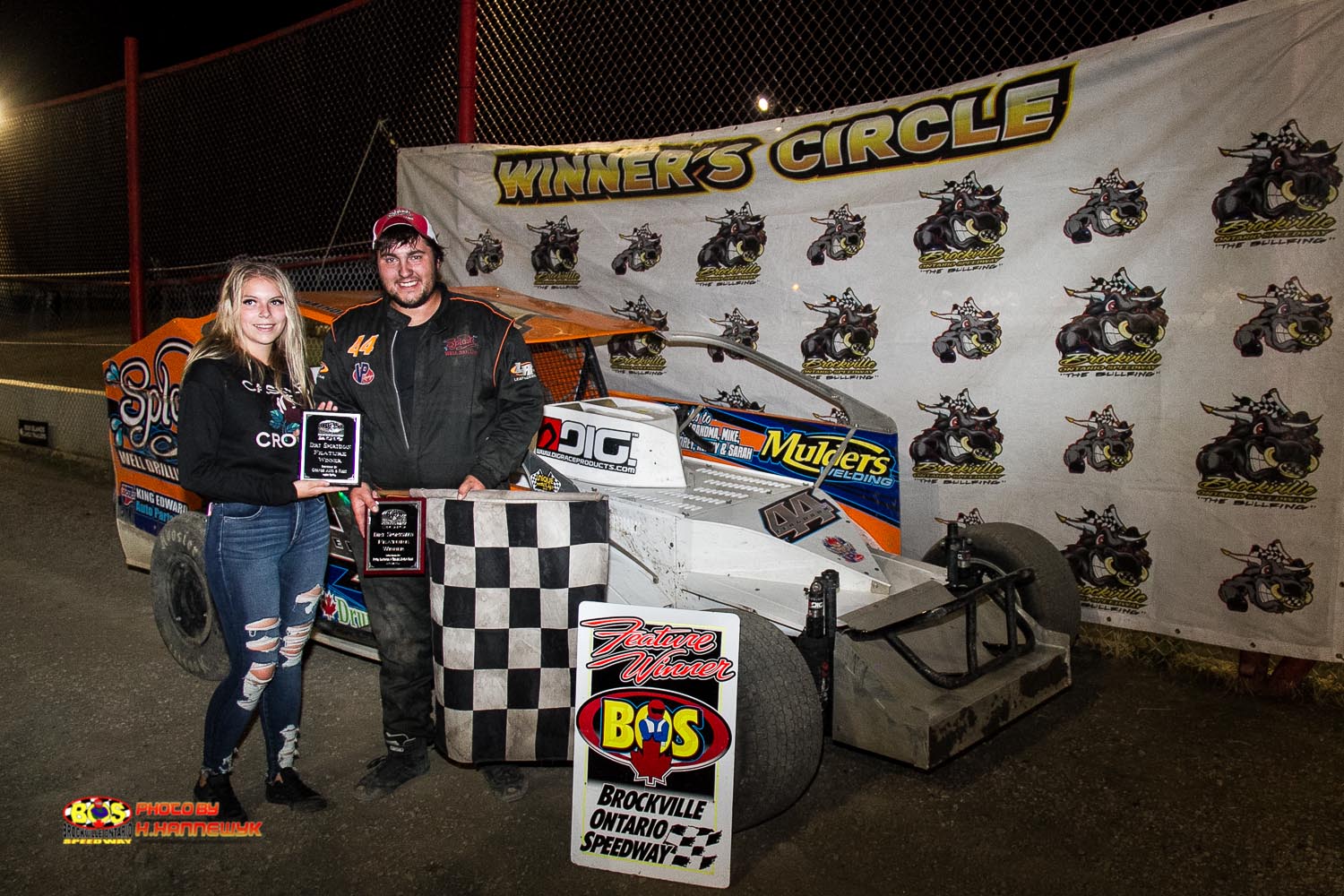 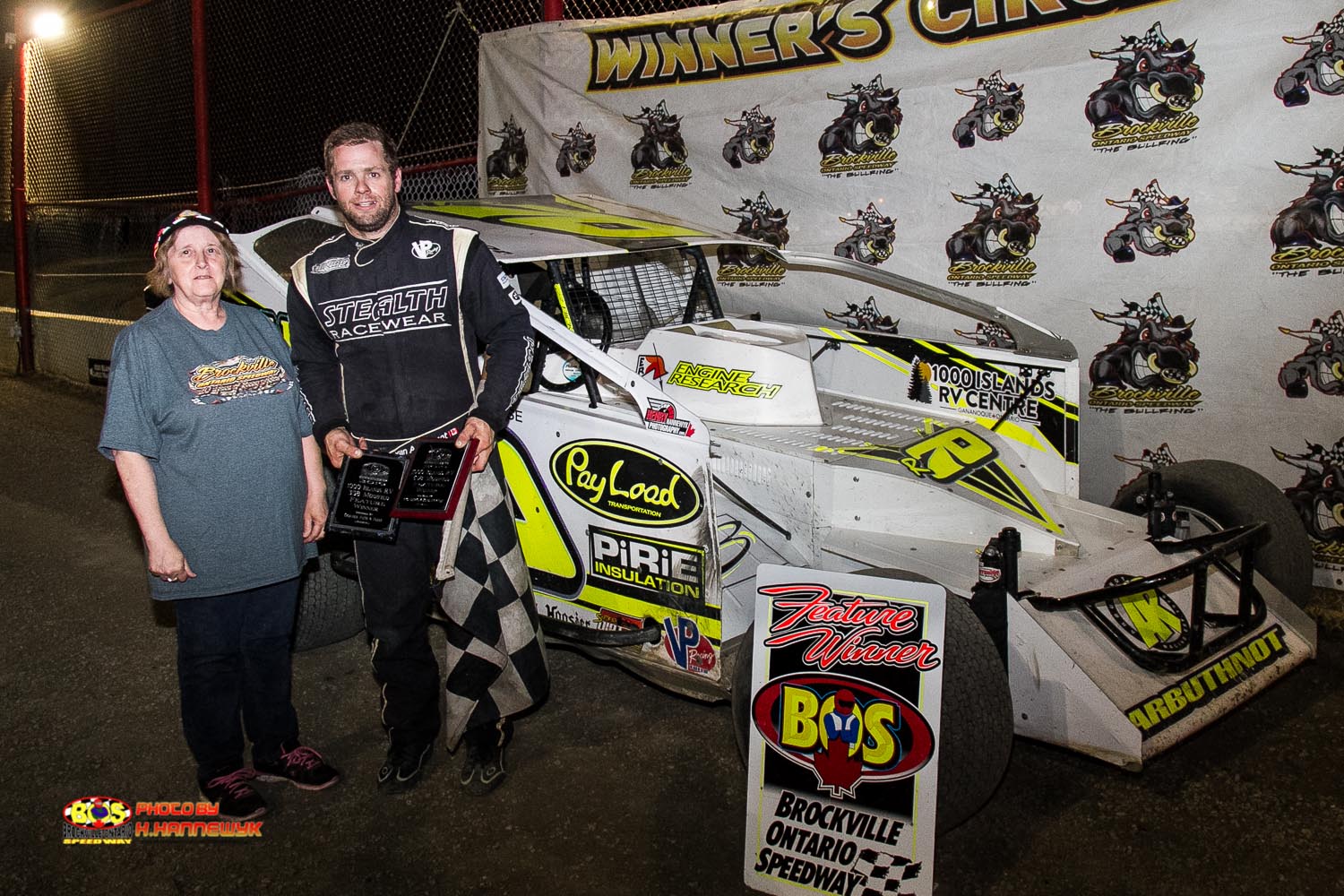 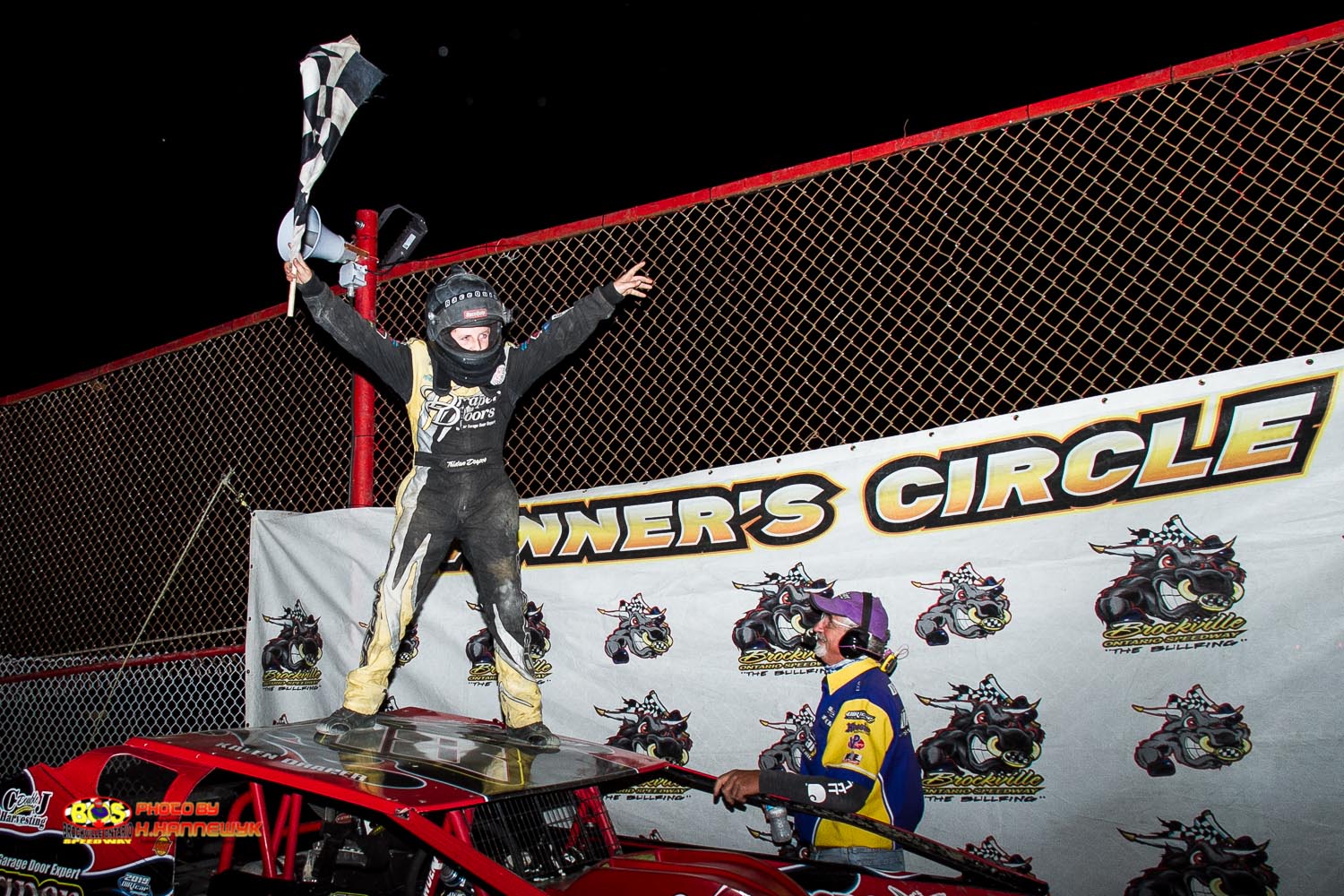 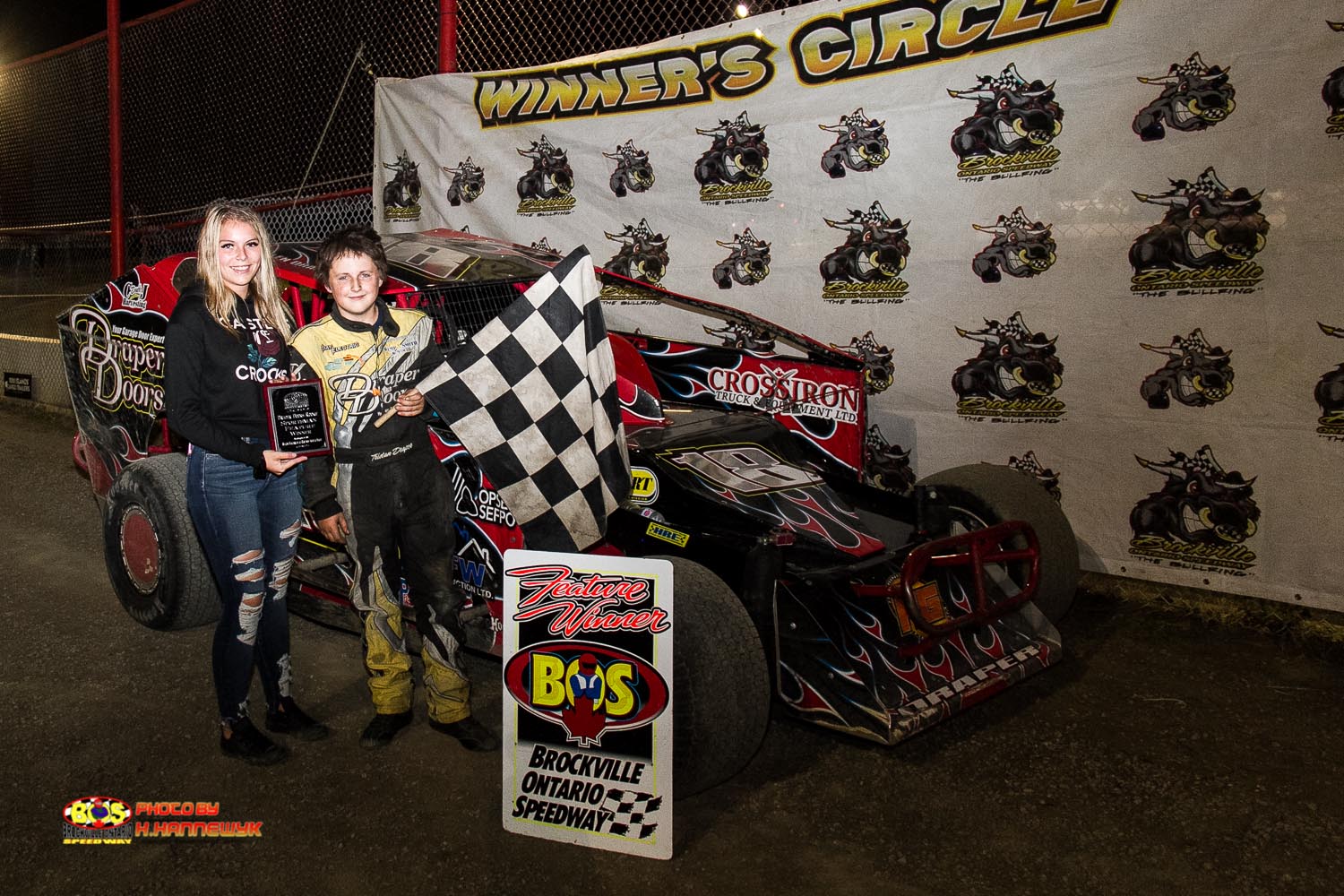 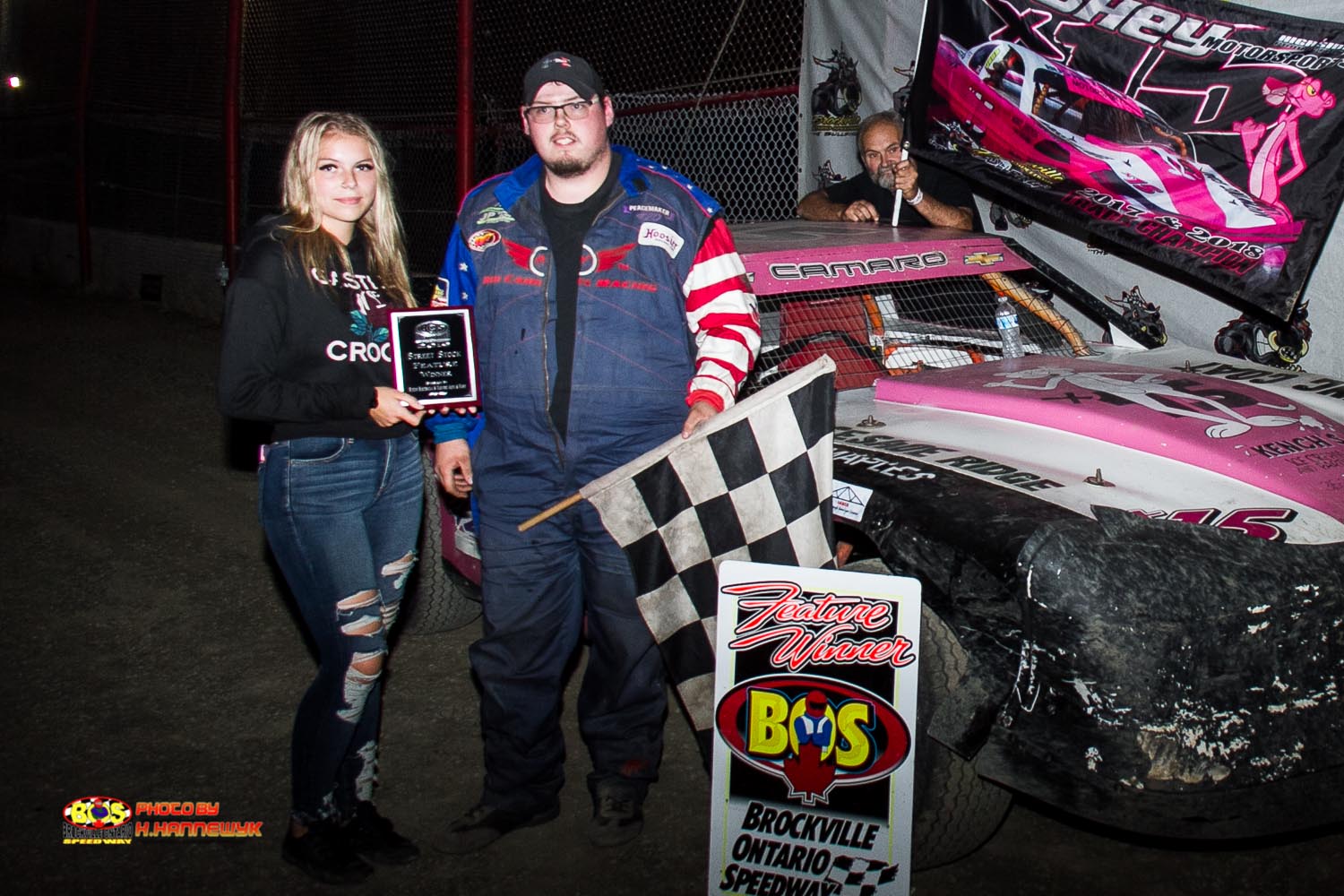