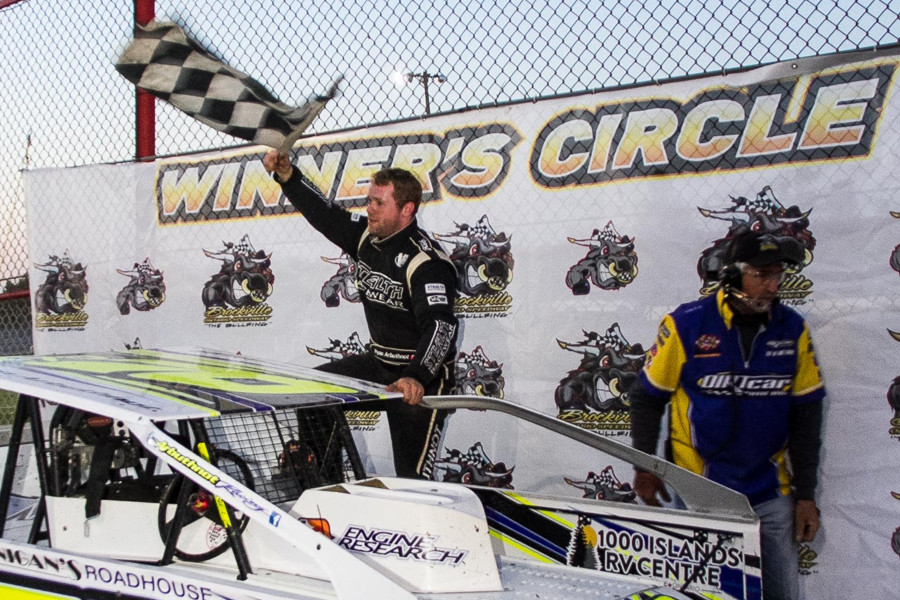 BROCKVILLE, ON – Another picture perfect night of racing at The Brockville Ontario Speedway saw nothing but clear skies on this warm summer day. All 5 divisions were back in action and with competitive racing the first two nights in all five classes it was another action packed evening as always.

The 358 Modified 30 lap feature saw Ryan Poole start on the pole and immediately race out to the early lead over Gage Morin, Andy Lloyd, Luke Stewart and Joe Banks. After many seasons at Brockville in several divisions in his career Poole was fast in the early going and looking to add a 358 Modified feature win to his impressive resume. Behind the leader Gage Morin was also looking to end early season troubles as he sat comfortably in 2nd with Stewart, Bryan Rogers and Andy Lloyd completing the top 5. Nearing the halfway point other drivers started to make a charge forward as Ryan Arbuthnot started 10th and raced his way to 3rd by lap 17 but was still a great distance behind the top 2 drivers. Up front Morin and Poole were in a solid battle for the lead as they raced wheel to wheel for several laps. Morin had a good run in turn 3 but over shot the turn and nearly going off the speedway. Poole would regain control of the lead but with 10 to go it all changed as the caution flew as Chris Herbison lost control of his car in turn 4. On the restart Poole elected to take the bottom but Morin was fast on the extreme outside lane and would charge by to take the lead with Arbuthnot battling Poole for 2nd and Danny O’Brien who charged from 13th to be a late race factor moving to 4th and Kyle Dingwall now 5th. With 7 to go heading into turn 1 Gage Morin saw his great night come to an end as he slid off the top of turn 1 bringing Arbuthnot to 2nd. With 5 to go Arbuthnot made his move for the lead down the front stretch bringing Danny O’Brien to 2nd as Poole slid to 3rd oover Stewart and Dingwall. On lap 26 the final yellow flew setting up a great finish between 2 rivals. When the green flew Arbuthnot stuck with the outside while O’Brien never left the bottom. Over the final laps Ryan Arbuthnot’s strategy was perfect as he marched on to score his first win of the year at Brockville. Danny O’Brien crossed in 2nd with Kyle Dingwall, Luke Stewart and opening day winer Luke Whitteker completing the top 5.

The story in the Sportsman division was would veteran Jason Shipclark finally erase all the early season demons and get to victory lane? He looked impressive in the early stages as he charged out to the early lead over Xavier Andrews, Gabe Cyr, Ryan Scott and Jarrett Herbison. An early caution before the completion of lap 1 saw a four car tangle in turn 3. Jamie Young received the most damage as his car was towed to the pits. Shipclark was running strong having pulled out to a straightaway in the early laps but behind him Ryan Scott was looking to put last week’s issues behind him. After not making it to turn 1 last week due to an accident Scott was up on the wheel as he raced into the top 3 getting by Andrews at the halfway point and tried at will to run down Shipclark and 2nd place running Gabe Cyr. With 9 to go Jaso Shipclark was in front but the big lead he had was slowly dwindling as Ryan Scott was on the move. After using the high lane to get by Gabe Cyr for 2nd has patiently ran down Jason Shipclark and on lap 19 would make his move to take control of the race for good. Behind the top 2 Johnathon Ferguson and Tristan Draper came from deep in the field. after a spirited battle with Gabe Cyr they both moved to 3rd and 4th and were charging hard but time was running out. In the end it was the big man from Kingston Ryan Scott erasing last week’s heartbreak to score his first Sportsman win of the season at The BOS. Jason Shipclark finally finished a race as he came home 2nd with Johnathon Ferguson charging from 11th to 3rd, Tristan Draper charged forward late in the event for 4th while Gabe Cyr completed the top 5.

The Street Stock division has seen the name Bushey since the mid 90s and with Tyler Bushey taking last year’s title and last week’s win, it appears the Ogdensburg native isn’t going away anytime soon. Sheldon Hoogwerf shot out to the early lead over Michael Dillon and Nick Gauvreau at the start. On lap 4 Tyler Bushey, who started 5th was on the move as he took over the lead over opening day winner Hoogwerf and Dillon. Once in front Tyler Bushey was hammer down as he built up a commanding lead near the halfway point leaving the rest of the field to figure out how to run him down. With the lead all but solidified with 5 to go a spirited battle raged on between Dillon and Hoogwerf for 2nd with Steve Brady and Todd Raabe running 4th and 5th. At the finish Tyler Bushey proved he is serious about getting another title as he charged to his 2nd win in as many weeks in the Street Stock ranks with a dominant performance. a near dead heat at the line saw Michael Dillon edge out Sheldon Hoogwerf for the 2nd spot with Steve Brady and Todd Raabe rounding out the top 5.

In the 15 lap Mini Stock feature Dylan Kirkland who had motor troubles 1 week ago had a brand new power plant under the hood and it proved to be fast in this night as he charged to the early lead with last week’s winner Brandon Henderson, Dominick Merkley, Tyson Slinger and Samantha Henderson giving chase. Kirkland and Henderson hed clearly the fastest cars on track as opening day winner Merkley was looking for some way to run those 2 drivers down. By halfway the battle was on as Brandon Henderson would make his way by the leader and begin to put some distance between himself and the defending track champion. As the laps wound down Henderson showed no signs of letting up leaving the Kirkland, Merkley, Richard Bartholomew and Samantha Henderson to battle it out in the top 5. After waiting for so long to claim his first ever win a week ago, Brandon Henderson ended a lengthy 7 day winless drought to score back to back wins in the Mini Stock ranks at Brockville. Dylan Kirkland settled for 2nd with Dominic Merkley, Samantha Henderson and Richard Bartholomew completing the top 5.

A classic battle in the 15 lap rookie Sportsman feature saw Xavier Perrin charge to the early lead over Jonah Hill and opening day winner Gavin Riddell. Perrin would lead the opening 6 laps before Brock Cullen was able to sneak bay and take the top spot away as the handling began to go south on Perrin’s car. Just past the halfway point of the race Gavin Riddell was on the charge after an early race spin and made his way to 2nd. From lap 9 on both Cullen and Riddell exchanged the lead twice per lap with neither driver gaining a clear advantage. Riddell would sneak by on the bottom and Cullen would pull the cross over move off the corner to regain the lead as they put on a fantastic chow for the fans. On lap 13 Cullen would finally take over for good, despite a final effort by Riddell Brock Cullen would go back to back in as many starts winning the Rookie Sportsman feature. Riddell scored 2nd over Jonah Hill who recovered from a spin early to finish 3rd with Michael Fournier and Melissa Gofford completing the top 5.

Next week the Border Battle Series takes place at Brockville with 1000 Islands RV on hand as the title sponsor for the night. 35 laps for the Modifieds plus a 30 lap special for Sportsman, Rookie Sportsman, Street Stock, Mini Stock and the 2nd trip for the Outlaw Vintage Modifieds as well. The action kicks off at 7pm. 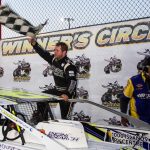 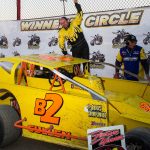 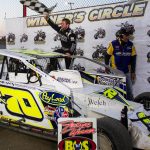 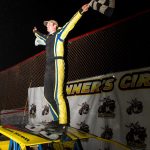 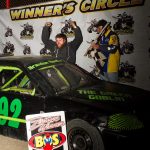 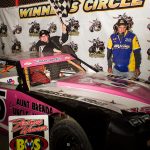 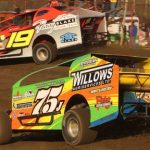