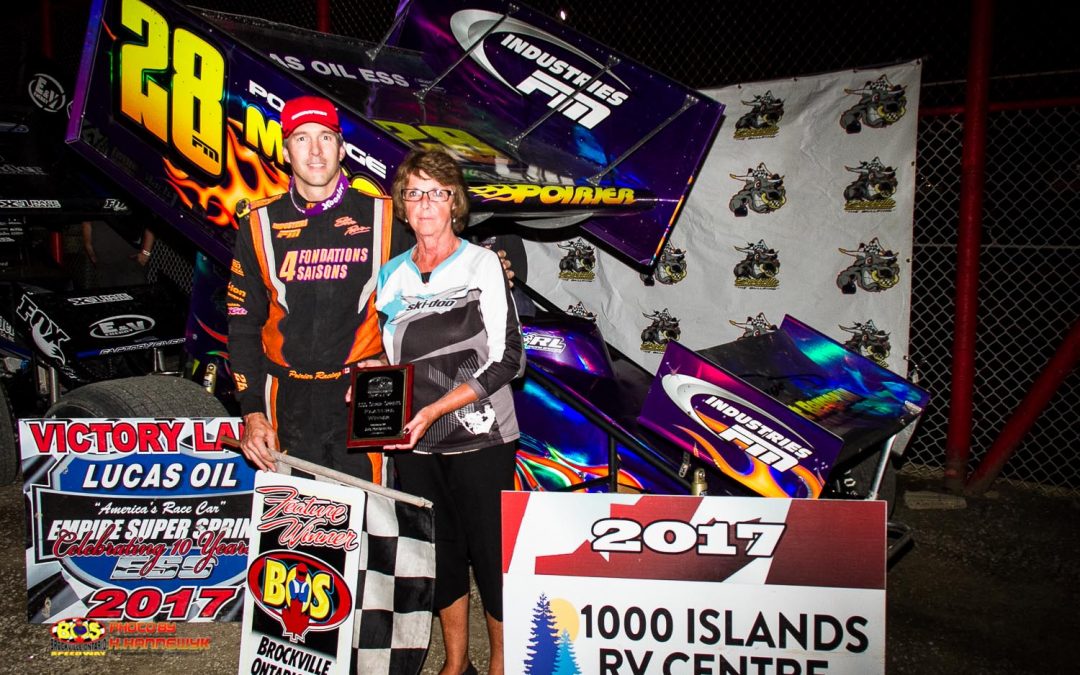 BROCKVILLE, ONT – The Lucas Oil Empire Super Sprints returned to the Brockville Ontario Speedway for the first time since 2008 with a familiar face finding his way to victory lane. Steve Poirier dominated the 25-lap event to pick up his second win of 2017 in the 1000 Islands RV Centre Tour of Canada feature.

Poirier drew the pole position for the start of Saturday’s A-Main. Although he had the best starting position, it wasn’t a simple run away and hide event as he faced challenges from multiple drivers over the course of the race. Luckily he was able to fend them off to pick up the $2,075 win.

“It was a really good position,” commented Poirier about his pole starting spot. “I didn’t know where to go at first. Obviously you don’t want to start in front and drop to the back. I was searching a little bit. I started on the inside then it looked like the outside got better. Then I saw the 87 (Barney) move on the inside and he was giving a run for my money. My car was working good. Thanks to Kevin Loveys, he gave me a good car tonight and it’s good to be in victory lane here. When I looked in my book the last time we came here to victory lane was 2014 so it feels good to be back here tonight.”

It was a rocky start to the main-event as Brett Wright ended up getting over on his side while collecting Paul Pekkonen and Dave Axton in turn one. No one was injured with only Wright being unable to continue in the race.

Green came a second time with Poirier rocketing out the lead with outside pole sitter Dylan Swiernik hanging close to his back bumper. Swiernik got up alongside Poirier for the lead on lap two before losing it on the top a lap later. He spun off the top of turn four to bring out the caution.

The green was thrown again and the result to this point remained the same with Poirier in full control. As he led, the battle behind him picked up between seventh starting Matt Tanner and sixth starting Jason Barney. The pair swapped the second spot multiple times before Tanner snatched it away on lap seven.

Tanner closed the gap quickly on Poirier getting to his back bumper. As he searched for a way to get around the seven-time champion Paul Pekkonen spun in turn two right in front of lead duo. Everyone escaped without contact but another yellow was necessary.

The pace resumed with Poirier steadily holding the lead as Tanner and Barney renewed their fight for second. Barney worked over Tanner for several laps before taking back the second position on lap 15. Before another lap was scored, Swiernik lost his battle with turn four again going off the bank causing the final yellow of the night.

Barney pulled alongside Poirier on the bottom for the restart. Poirier put his No. 28FM on the high-side while in typical Barney fashion he planted his car on the bottom. The pair raced side-by-side for a number of circuits with Poirier unable to shake Barney.

As the race the final laps Barney made one mistake and missed the moisture on the inside. This proved to be too much to overcome as Poirier raced to the checkered flag for the win.

“I needed a just little bit more in turn three so I started driving it in deeper, but you don’t want exit the track and look like dummy that finishes last,” joked Poirier. “The car was working okay so I just pushed a little bit more. Normally on the long the run the inside gets better, but it looked like the outside got better than the inside and we just had enough for the win.”

Barney, the current high-point man with the Empire Super Sprints wrapped up the night in second.

“We just needed eight to ten green flag laps there,” commented Barney. “We had a good run going there until the caution came out. It was good to race with Steve again. That’s way it’s supposed to be, us and Steve. I thought we had something for him on that start. I kind of jumped him a bit there, but that was the only chance I had. We missed it a little bit. It was a good race, to run second, we’ve been on the podium two nights in a row now. We need to get a little bit better. It’s tough racing Steve, but it was fun. I like racing with him. He makes us better.”

Tanner, of Stephentown, N.Y., was able to finish in third. He was in the mix for the win right before the yellow came in the first third of the race. He thought without the caution he had something for Poirier.

“We didn’t need that caution when we got into second,” said Tanner. “We were running Steve down pretty good and I think we could have caught him. Maybe we could have caught him off guard a little bit because he didn’t know we were there. That caution came out. I feel like we gave it away. We didn’t put a new tire on before the feature and it took four or five laps to get rolling. I definitely needed a long run to keep the tires hot. With a little lapped traffic I think we could have had something for these two.”

Paulie Colagiovannia fought his way to a fourth place finish after redrawing 12th. Paul Kinney hung in the top six all night before picking up a couple spots late to finish in the fifth position.