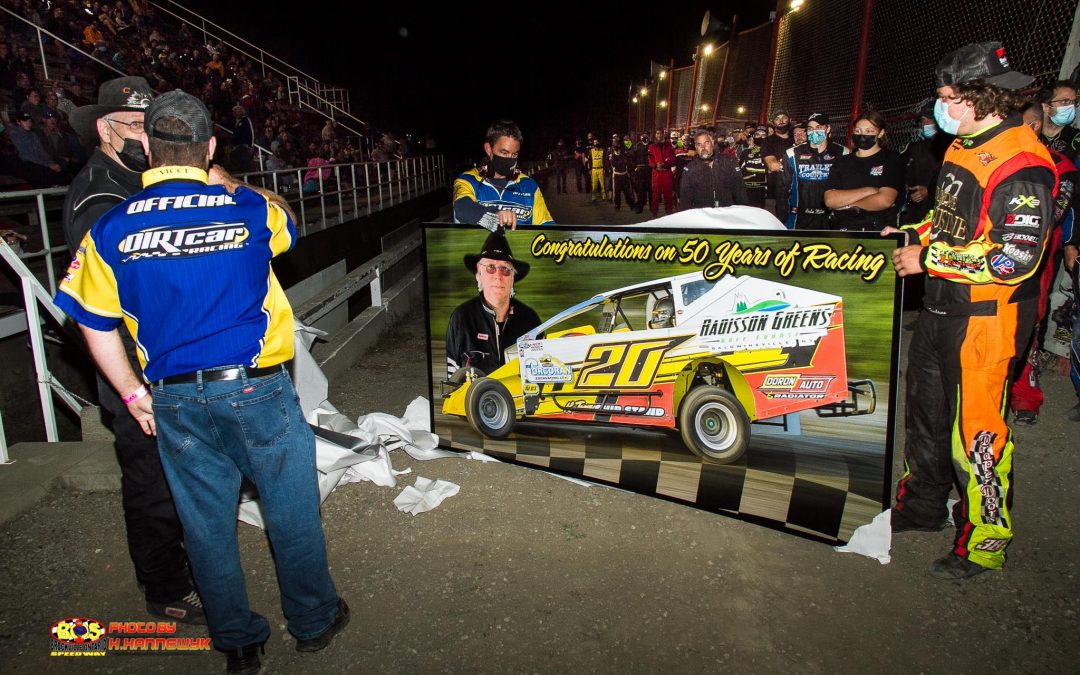 Staff and Management at the Brockville Ontario Speedway began the 2021 racing season simply wondering if there would be a season at all with the COVID-19 pandemic still very much present. By July 3rd cars were once again back on track and running strong and finally champions were crowned in all 6 regular divisions, along with a legend and Hall of Famer being honored for 50 years in racing.

J and J Automotive 358 Modified competitor simply known as Stock Car Steve Bilow began his racing journey at the local short tracks and has seen plenty over his racing career. At intermission on championship night every driver from every team in the pit area assembled on the front stretch to honor his career. Following a short interview Steve was honored with a sign which was autographed by all drivers at the speedway. Also, Steve was presented a special trophy commemorating his dedication to the sport. He was also given the rare Golden Ticket at the Brockville Speedway by promotors Paul and Cheryl Kirkland.

In J and J Automotive 358 Modified action the title would come down to a battle between Kyle Dingwall and defending track champion Ryan Arbuthnot with just 22 points separating the two drivers. The start of the 30 lap event on 1000 Islands Toyota night was a bit rough as several cautions for minor incidents slowed the field in the opening 4 laps. Chris Raabe who was searching for his first ever Brockville Modified win would set the pace early but Kyle Dingwall was up to the challenge as he challenged the Alexandria native for the lead. Dingwall would take the top spot away and bring Ryan Arbuthnot with him to the runner up spot with Gage Morin and Lee Ladouceur completing the top 5. Dingwall was quick in the early laps on a track that was tough for some as Brian McDonald found out, spinning off turn 3 and 4 on lap 11. Under the same yellow 358 Modified rookie Johnathon Ferguson slowed to a stop with brake issues. Once the laps clicked off Kyle Dingwall continued his torrid pace as he pulled out to a comfortable lead while Arbuthnot and Raabe continued their battle for second with Gage Morin and Chris Herbison completing the top 5. As the race drew to a close the rest of the field was no match for Kyle Dingwall on this night as he would dominate the event for his 2nd win of the season. Ryan Arbuthnot would end up second which was more than plenty to notch his 2nd title in a row. Chris Raabe ended his regular season on a high note with a 3rd place effort over Gage Morin and Chris Herbison. Steve Bilow would end his 50th year by finishing the season 10th in 358 Modified points to go along with 3 top 10 finishes on the season.

In J and J Automotive Sportsman action Bobby Herrington came into the evening with a 31 point lead over Jarrett Herbison in the chase for the title and both drivers were fast at the start of the 25 lap event. After a slow start due to many early race cautions Herrington would charge past early leader Xavier Perrin on lap 2 with Shane Stearns Ricky Thompson and Dylan Kirkland making up the early top 5. Herrington was once again the dominant car as he began to stretch his lead out over a quality field. Ricky Thompson was fast early as he made some great moves at the start of the event to get to the runner up spot and in the process Jessica Power was charging forward from her 7th starting spot as she moved to third on lap 4. It was a struggle for title contender Jarrett Herbison on this night as he slid off the top side of turns 1 and 2 but kept the car rolling but had a long way to go to get back in contention. Herbison would end up 9th at the finish. The field began to string out around the speedway and Herrington, much like he has all season, worked traffic to perfection and seemed to get faster with Thompson and Power continuing their battle for 2nd over Xavier Perrin and Shane Stearns. Without help from a caution flag in the late stages of the event nobody was catching Bobby Herrington once again as he would charge to his 7th win in 8 races at Brockville and also take his first Track Championship. Thompson held on for 2nd with Jessica Power Xavier Perrin and Shane Stearns taking the top 5 spots.

The race everyone had their eye on was the Mini Stock division and math was simple for this track title. Jarrod Galway and Hayden Brown came into the night locked in a tie for the point lead. Whoever finished in front of the other would be the new champion. Galway would take the lead at the drop of the green flag over Hayden Brown, who would have his share of struggles falling to the back portion of the top 5 as Mark Supernant and Marc Dagenais would complete the top 3 early on in the 20 lap event. Galway would remain in control but Hayden Brown continued to fight as he finally made his way to the runner up just past halfway and challenged Galway repeatedly for the lead. As the laps clicked off the battle for the lead became intense as both drivers raced each other hard but also kept it very clean during the race. On the white flag lap Brown made his move to the inside lane on the back stretch and pulled even with Galway. Coming off the final turn the top two drag raced to the checkered flag providing one of the closest finishes all season. At the line Jarrod Galway would claim his first win of the season but more importantly his first ever Mini Stock championship after 5 years of trying. Hayden Brown came home a very close second with Matt Boal Jamie Larocque and John Lamarche completing the top 5.

Brock Cullen held a comfortable point lead heading into the 20 lap feature for the Street Stock division. After a lap one tangle involving three cars Nick Merkley would lead the field in the opening laps over Peter Raabe and Keith Riddell. Merkley had a strong car but Todd Raabe, who had a slim chance at the title, would work his way to 2nd and put pressure on Merkley for the lead. The caution would fly on lap 2 for Nick Gauvreau who slowed in turn 4. Under the same yellow Denis Hamel was not happy with Brett Horner in turn two and made heavy contact pushing Horner through the infield causing heavy right rear damage to his race car. Hamel was black flagged and disqualified for the event while Horner was granted time to head to the pits and repair damage. He would return to the race and be a factor at the end. After the race resumed Todd Raabe would make his way by Merkley to take control of the race, something the field has seen a lot in 2021. As the laps wound down Nick Merkley’s great night took a bad turn as he suffered a flat tire. He would return for a top 5 finish. On this night Todd Raabe was the class of the field as he would score his 6th win in 7 tries this season in Street Stock. Peter Raabe would cross in 2nd with Brett Horner making a big run to come up for third with Brock Cullen claiming 4th but more importantly his first Street Stock championship, with Nick Merkley rounding out the top 5.

The Novice Sportsman feature saw Sandy McFarlane take the top spot away with Eric Loyer, Greg Brinklow Pryor Stacey and Nathan McKinnon making up the top 5 early on. McFarlane held a slight lead but Loyer would make his move taking the lead and begin to author a dominant performance. On the other-hand points leader Justin Cyr had his struggles through the 15 lap event. Despite holding a 48 point lead things were tense as he was involved in an early caution and then stuck in traffic until the halfway point. Cyr would make his way to the front as he tried to get the best finish he could. Up front Loyer and McFarlane began to drive away while Greg Brinklow, Pryor Stacey, Cole Perry and Justin Cyr battled for position. In the end nobody was stopping Eric Loyer as he went unchallenged for his first Brockville Novice Sportsman win. Sandy McFarlane had a career best 2nd with track champion Justin Cyr making it to third over Pryor Stacey and Cole Perry.

In the Vintage Division no points were on the line and it was all about the feature win as Randy Gaudet, Josh Powers and Steve Billings were the dominant drivers at the start of the 20 lap feature event. By lap 4 the top 3 had put some distance between 4th place Ian Gordon, who was in a battle with Matt Barbour for position. On lap 7 Rick Grundy spun off turn 3 and made contact with the fence, but things were about to take a bad turn on the next restart. Heading into turn one drivers tangled heading into turn 1 causing a massive pile up with over half of the 19 car field involved. The race saw a lengthy red flag to remove the cars that could not continue. Despite several hard hits all drivers were ok and some were able to return to action. Even with the turn one incident there was no change in the top 3 as Gaudet, Powers and Billings remained in control. Steve Billings would take the lead briefly on lap 13 and appeared to be headed for victory. On lap 17 after a spirited battle, Josh Powers would slip by Billings and hold it for good as he recorded his 2nd Brockville Vintage win of the year over Steve Billings, Randy Gaudet, Matt Barbour and Pete Stapper, who would be declared the winner in the 50/60 division in the original Tony Blake car that made the first ever lap on the speedway in 1969.

The regular racing season may be over with but racing is not done at The BOS as the annual Monster Enduro is set to take place next Sunday afternoon. For details on start times and details on how to enter, head to our website at brockvillespeedway.com. For instant updates at the speedway, give us a follow on Facebook, Twitter and Instagram 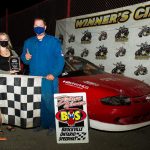 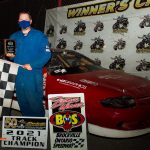 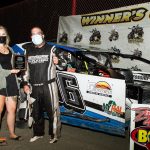 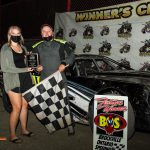 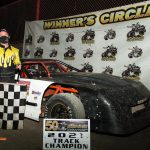 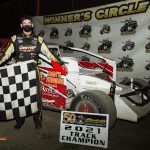 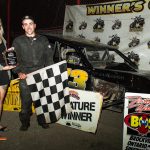 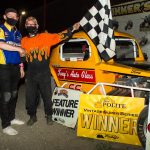 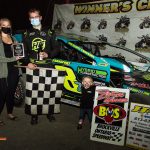 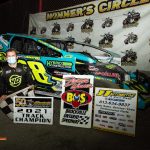 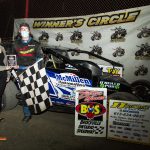 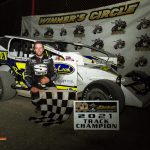