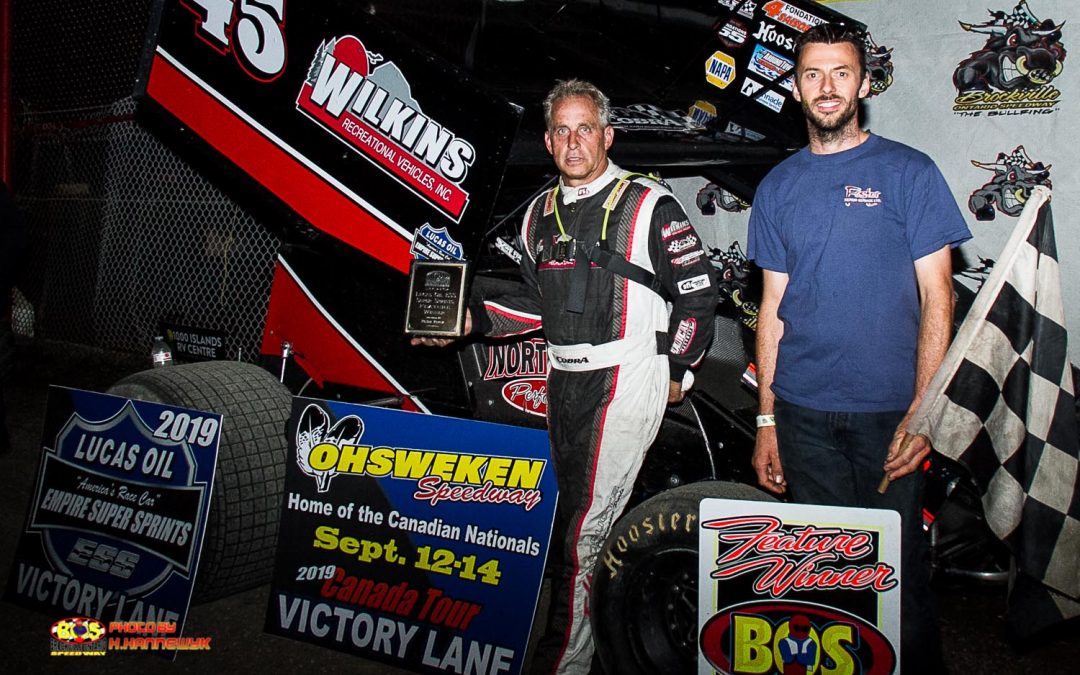 BROCKVILLE, ONT – It was a night of firsts Saturday night in Canada. For the first time in 2019 the Lucas Oil Empire Super Sprints invaded the Brockville Ontario Speedway and for the first time, Chuck Hebing put his familiar #45 in the winner’s circle. Even though the veteran is currently second in points, the checkered flag has eluded him until this 25 lap, $2,000 to win A-Main.

Another first at the speedway was a father/daughter front row for the start of the 25 lap A main event as Kelly Hebing took the lead from her dad Chuck and nearly led lap one, until “The Cobra” rocketed past the “Lil’ Cobra” off turn four.

“Anytime you get a win its special, especially after the year we have been having. But to start alongside Kelly was pretty cool,” said the past ESS champ, “That will be something I always will remember.”

The win not only got Hebing some important points for the overall Lucas Oil Championship but also for the Ohsweken Speedway Canada Tour as well.

Hebing was fast early and was using the top lane to his advantage as he held a comfortable lead in the opening laps of the race. On lap seven the first yellow would fly for Rick Wilson who spun his car off turn four and the caution would fly. “On the restarts I wanted to use the outside but when I saw Steve (Poirier) starting low I knew I had to hit them just right.’

On the restart Hebing took control as Poirier took was a close second trying hard to run down the leader. The leaders began to enter traffic and Poirier knew this was his moment to take advantage of any mistake made by Hebing but the Ontario New York native was working traffic perfectly.

“Chuck was fast but lapped traffic is always a key here and I was hoping I could get a shot at him,” said the defending and eight-time champion, “I tried down low a few times and he was strong up top but I just couldn’t make it work.”

Just as it looked to be an easy win, a final caution came out with three laps to go. They both echoed the same thoughts.

“Yea, I knew I just had to do it one more time (good restart),” Hebing quipped.

“I was hoping to get one more shot at him but he just got another good jump,” Poirier noted, but then he summed it up the night perfectly. “That was fun though and good to see some old guys up front for a change!”

Hebing collected career win #37 which moved him to fourth on the all-time list inching ahead from Hall of Famer Mal Lane. Poirier in for second ahead of Matt Tanner, Jordan Poirier and Paulie Colagiovanni. Rounding out the top ten were Jonathan Preston, Shawn Donath, who came back from a flip the night before at Can-Am, Jason Barney, who was involved in the same accident as Donath, Rick Wilson and Billy VanInwegen