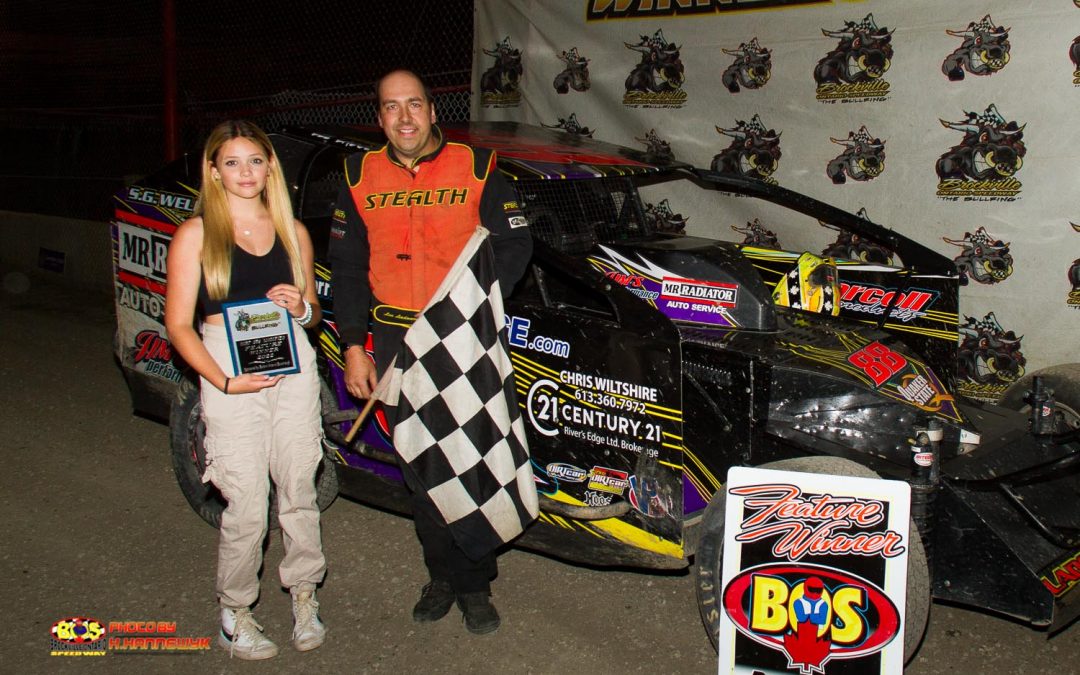 Eastern Ontario Eavestrough was on hand this past Saturday night at the Brockville Ontario Speedway and along with a great crowd, were treated to some exciting racing in all four classes on this night.

The Novice Sportsman hit the track first for a 12 lap feature event. Jordan Wood was looking to win his third feature of the season as he led the first five laps over Shawn Hodge and Paul Donnelly. Wood had a great car but Hodge was closing in quickly and looking for the lead. On lap 8 Hodge made his move as he took the lead away from Wood, who was now in a battle for second with Donnelly. Over the final laps Shawn Hodge would make it look easy as he pulled away for his second win of the season and added to his points lead as well. Jordan Wood, Paul Donnelly, Nathan Lambert and Marco McCarthy completed the top 5.

In the DIRTcar 358 Modified 30 lap feature it was Madison Mulder leading the early laps, over Lee Ladouceur, Terry McClelland, Chris Herbison and Joe Banks. Mulder was fast early but Ladouceur was on a mission to get to the front as he shot by Mulder off turn two to grab the lead. Chris Herbison was also on the move taking second and went in search of Ladouceur. On lap 10 Herbison took his turn at the front with Ladouceur and Banks now making up the top three. Behind them, Kyle Dingwall Ryan Arbuthnot and points leader Chris Raabe were on their way forward, as they charged into the top 5 just past the halfway point. Herbison was out in front and it appeared as if he was well on his way to his third win of the season. On lap 23 Steve Bilow skated off the top of turn 4, which gave Ladouceur the break he was wanting. On the restart Ladouceur and Herbison were side by side with Ladouceur gaining the top spot into turn three. Herbison tried to get back by but was finding himself in a battle with Arbuthnot, Dingwall and Raabe for position. Over the final laps, Lee Ladouceur proved to be too much as he claimed his first Brockville Modified win after many years of trying and put car owner Jim Primrose in the winners circle yet again. Chris Herbison ran a fine race to come home second. Kyle Dingwall, Chris Raabe and Ryan Arbuthnot completed the top five.

Former Street Stock champion Michael Dillon led early in the 25 lap DIRTcar Sportsman feature with Evan Reynolds, Josh Powers, Tyler Stewart and Ricky Thompson making up the top five. Even with the lead, Dillon found himself in a battle with Evan Reynolds in the early stages of the event, however Josh Powers was making his way forward. On lap 9 powers took over the lead with Dillon back to second and Bobby Herrington now third. After picking up his second win in a row and fourth of the season a week ago, the defending track champion would charge to second and quickly close in on Josh Powers for the lead. With 10 laps to go Herrington would use the inside lane off turn two, to grab the top spot and start to pull away. Behind the leader Powers found himself in a late race battle with Xavier Andrews who was on the move and looking for the runner up spot. This night would belong to Bobby Herrington, as he scored his third win in a row and fifth of the season. Powers settled for second over Xavier Andrews, Dylan Kirkland and Evan Reynolds, who had a career day scoring a 5th place finish.

The 15 lap Supernant Truck Shop Mini Stock feature saw, defending track champion Jarrod Galway take the lead over Max Steele and Tyson Slinger. With Galway and Steele in command, the real race was between six drivers for third. An incredible six car battle, which resembled a high speed pace lap, saw drivers battling for position two by two, three rows deep. A quick yellow would end that battle as the field bunched up for another restart. When the green flew Galway once again remained in control over Steele, with Jamie Larocque charging to third. Over the final laps, Jarrod Galway would erase all the bad luck this season as he scored his second win of the year. Max Steele would finish a career best second over Larocque, Skylar Ladouceur and Matt Boal.

Next week the month of August kicks off with Greenshield Pest Control on hand as the night sponsor with the Vintage Modifieds on the card plus the DIRTcar 358 Modified, DIRTcar Sportsman, Novice Sportsman and Street Stock. Racing begins at 7pm. 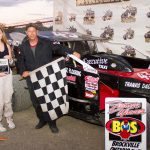 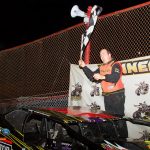 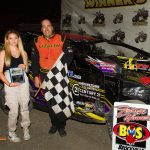 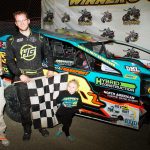 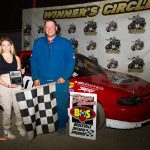