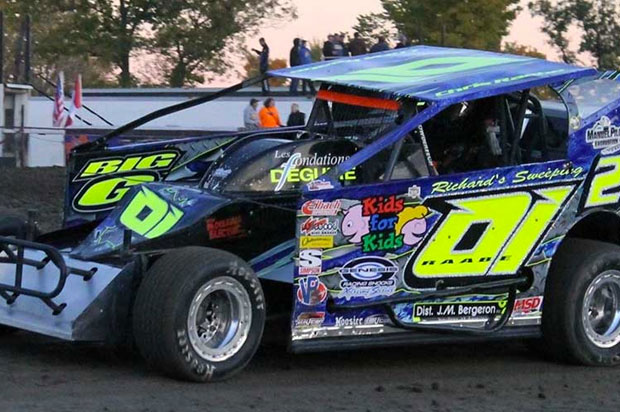 Its an honour that has been bestowed on some of the most talented drivers in dirt track racing. Being named a Mr. DIRTcar Series champion is the crowning moment of a successful season in a highly competitive field. Since Tony Corcoran earned the first ever Mr. DIRTcar 358 Modified title in 1983, several drivers with strong ties to Brockville Ontario Speedway have received the same award.

Doug Carlyle won in 1986 and Pat O’Brien’s name went into the record books on 4 different occasions, to go along with his fist full of track championships at The BOS. 1989 was Laurent Ladouceur’s turn, with Tim Fuller taking the prize in 1993 and 2003. Dale Planck also has a pair of Mr. DIRTcar titles, earning the prestigious award in 2009 and 2012. Steve Paine – who was the 2006 Big Block Modified champ at Brockville – captured the Mr. DIRTcar 358 crown in 1999 and 2002.

The Brockville Speedway connection to one of the DIRTcar Racing’s most prestigious prizes continued in 2016, when Chris Raabe – who won the Sportsman Modified track championship in 2006 and 2008 and Mr. DIRTcar titles in 2008 and 2009 – captured the 358 Modified honours. Shane Pecore – who was the best of the Sportsman class in 2013 and 2014 – added another home track triumph and the Mr. DIRTcar prize to his resume last year. Even though the stats are hard to explain, track owner and promoter Paul Kirkland says he’s happy to see so many of the sport’s award winners come from his facility.

“We’ve had very competitive fields in all of our weekly divisions over the years,” Kirkland said. “And it isn’t just our drivers who shine at the big events. Since its inception, different runners – including Dale Planck in 2009 and Erick Rudolph in 2013 – have been fortunate enough to clinch the Mr. DIRTcar Series championship here, during the Northeast Fall Nationals.”

Kirkland says its also impressive to see the number of rookie of the year winners who’ve called the popular clay oval on Temperance Lake Road their home track over the years. Chris Herbison was the top Sportsman Modified freshman in 2006 and won track championships in 2011 and 2012. Matt Billings – Brockville’s Sportsman track champion in 2009 – was named DIRTcar Big Block rookie of the year for 2013. In the 358 Modified ranks, names like Randy Ritskes, Laurent Ladouceur, Chris Jones, Todd Stewart, Luke Whitteker, Chris Raabe and Ryan Arbuthnot captured the same prize. Lee Gill was the top first year small blocker in 1994 and claimed 5 track championships; including a streak of 4 straight from 2000 to 2003.

The list doesn’t end there. Tim McCreadie was a Brockville 358 rookie in 1996 and claimed the Big Block prize a year later. Frankie Caprara mirrored T-Mac’s performance in 1999 and 2001. Not to be outdone, Lance Willix made it a three-peat for the Empire State runners in 2006 and 2010.

Short Track Saturday Night Notes: Fans can pick-up a copy of Brockville Speedway’s 2017 during the annual Racing Preview Show – Friday and Saturday, March 24th and 25th – at the Frontenac Mall in Kingston.

Keep up-to-date with the latest pre-season news and information by checking www.brockvillespeedway.com, as well as the track’s Facebook page and Twitter feed.