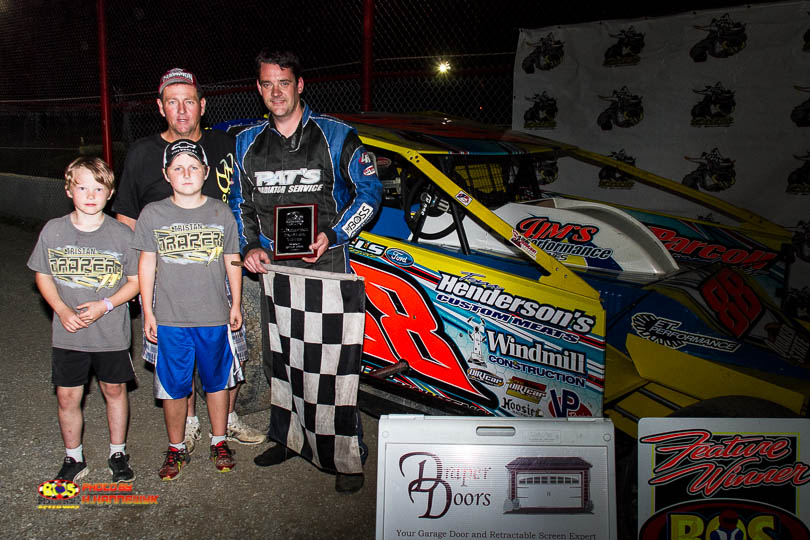 BROCKVILLE, ONT – It was a family affair this past Saturday night at the Brockville Ontario Speedway as Tim O’Brien edged out brother Danny for his first 358 Modified win of the year, Dylan Evoy became the first repeat winner in Sportsman, Rick Wilson returned to The BOS victory lane claiming the Patriot Sprint Tour 25 lapper, Xavier Andrews made it 4 for 4 in Rookie Sportsman, Nick Gauvreau dominated the 15 lap Street Stock event and Melissa Gifford notched her first career Mini Stock checkered flag.

The Patriot Sprint Tour was ready for battle as Sammy Reakes and local favorite Rick Wilson led the field to green with Wilson getting the jump but behind the leader everything took a bad turn. Yan Bilodeau broke his front end heading down the back stretch, with no control Bilodeau came down into the path of Mitch Brown sending both cars flipping in turn 3. Both drivers were able to climb out without injury. When the race went back to green Wilson held a slight lead with Dylan Westbrook, Jared Zimbardi, Alain Bergeron and Lee Ladouceur giving chase. Wilson had won many features at Brockville, but it had been 11 years since he claimed a Patriot victory and was looking stout as he held a half straightaway lead while both Westbrook and Zimbardi tried to keep pace. On lap 16 Sammy Reakes slid off turn 4 bringing out the yellow. On the final restart on lap 16 Wilson was able to pull out to a comfortable lead and despite numerous challenges Rick Wilson would end the drought taking home the popular win with Westbrook coming home in 2nd after a spirited battle with Jared Zimbardi who crossed 3rd. Lee Ladouceur and Alain Bergeron rounded out the top 5.

In 358 Modified action Stephane Lafrance was looking to put a rough start to 2017 behind him as he raced out to the early lead over Tim O’Brien, Chris Herbison, Kyle Dingwall and Danny O’Brien. Lafrance would lead the opening 4 laps until Tim O’Brien used the top side to take over the lead with Lafrance now 2nd. Once in front Tim O’Brien was on a rail in his Jim’s Performance Plus machine building up a full straight away lead by lap 10 but the battle was on behind him. Chris Herbison Stephane Lafrance and Kyle Dingwall were all in a tight battle for position with Herbison clearing Lafrance for 2nd on lap 12 but still had a big distance to make up. Danny O’Brien was also on the move as he got by both Dingwall and Lafrance to move into 3rd by lap 16 but had some work to do to catch younger brother Tim and Chris Herbison. With 9 laps remaining Chris Herbison’s shot at a win went away as he clipped an infield tire in turn 12 breaking the front end on his car ending a great evening. On the final restart Danny O’Brien made several attempts to get by for the lead using the bottom lane but Tim stayed on the top and would hold off a bid on the final lap to claim his first Brockville victory since 2011. Danny would cross in 2nd with Stephane Lafrance, Kyle Dingwall and Bobby Herrington completing the top 5.

The 25 lap Sportsman feature saw Josh Kirkland jump out to the early race lead over Chris Ferguson, Tom Roy, Jarrett Herbison and Tristan Draper. Kirkland would lead the opening 3 laps before Ferguson went back by on the top lane of the speedway to take over the lead but his time up front would not last long. On lap 5 Ferguson got a bit too high coming off turn 2 sliding off the back stretch handing the lead back to Kirkland but Jarrett Herbison was on the charge. Using a brave 3 wide pass Herbison took over the top spot while Dylan Evoy also made a big move taking the 2nd spot away. On lap 10 a scary moment off turn 2 saw Tom Roy spin, with no place to go Jamie Young slammed into Roy sending him end over end in turn 2 bringing out the red flag. Both drivers were able to walk away but their machines were done for the night. On the restart Dylan Evoy jumped out front with Jason Shipclark, Ryan Scott, Shane Pecore and Herbison completing the top 5. Ryan Scott was making some big moves late in the event as he slipped by Shipclark for 2nd on lap 16 and quickly ran down the leader. Shane Pecore’s great night ended in turn 4 as he slid off the speedway on lap 17 bringing out the final caution. Pecore recovered to finish 8th. In the end after several attempts to get by, Ryan Scott and the rest of the field had nothing for Dylan Evoy as he became the first 2 time winner in Sportsman. Ryan Scott held on for 2nd with Jason Shipclark, Johnathon Ferguson and Shane Stearns who’s season debut resulted in a 5th place finish.

The Rookie Sportsman saw Dave McDonald take away the top spot early on over Dale Gifford and Xavier Andrews. McDonald was looking to do what nobody has been able to do this season and that’s beat Andrews but he looked to have the field covered as McDonald led by over a straightaway at the halfway point. On lap 12 the caution flew setting up a battle between teammates. When the green flew McDonald held a straight line on the bottom but Andrews was on the charge from the top lane. On the final lap Andrews would pull even with the leader, as they headed into turn 3 and off 4 Andrews would slip out front and claim the checkered flag by a car length to keep his streak alive at 4 straight wins. Dave McDonald settled for 2nd with Alex Gagnon crossing 3rd.

Street Stocks have been popular at Brockville in 2017 and on this night it was no different. After a wild start to the 15 lap affair Nick Gauvreau would find himself at the front of the field and would have his way during the entire race. Behind the leader Sheldon Hoogwerf, last weeks winner Tyler Bushey and Michael Dillon were all in a tight battle for position. Bushey was able to clear Hoogwerf for 2nd but needed something to happen in order to catch the leader. In the end Nick Gauvreau had everyone covered as he charged to his first Street Stock win of the year over Bushey, Sheldon Hoogwerf, Michael Dillon and Keith Riddell.

The Mini Stocks have seen 3 different winners in 3 events with 2 of them being first time winners. The possibility for a 3rd first time winner was there as early race leader Chris Bakker held the top spot with Dylan Kirkland 2nd as he tried at will to get by the leader and claim his first ever win. Bakker had strong car leading the first 10 laps until mechanical issues ended his great run handing the lead to Dylan Kirkland with Melissa Gifford now 2nd and Teddy Baird 3rd. On the restart Kirkland’s car never took off but Melissa Gifford did as she drove by for the lead bringing Teddy Baird to 2nd and the battle was on. The top 2 raced hard for the lead but Gifford held strong in the top spot. On the final lap Baird gave it one last shot in turn 3 but off of turn 4 Melissa Gifford held on and became the 3rd first time winner in 4 weeks in the Mini Stock ranks. Baird came across the line 2nd over Dustin Bode, Kirkland and Mike Best.

Race fans don’t forget to check out the new ticket prices for our Ogilvie’s Quad Crown series race on Canada Day July 1st . The more you buy the more you save. Next week Coca Cola and BOB FM will be on had for a full show plus the Outlaw Vintage Modifieds. Racing starts at 7pm. 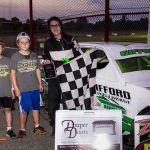 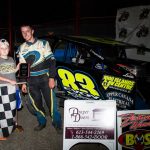 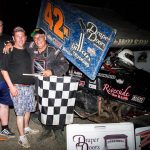 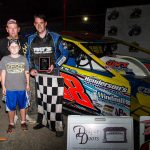 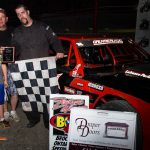 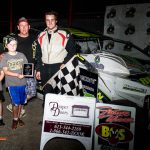