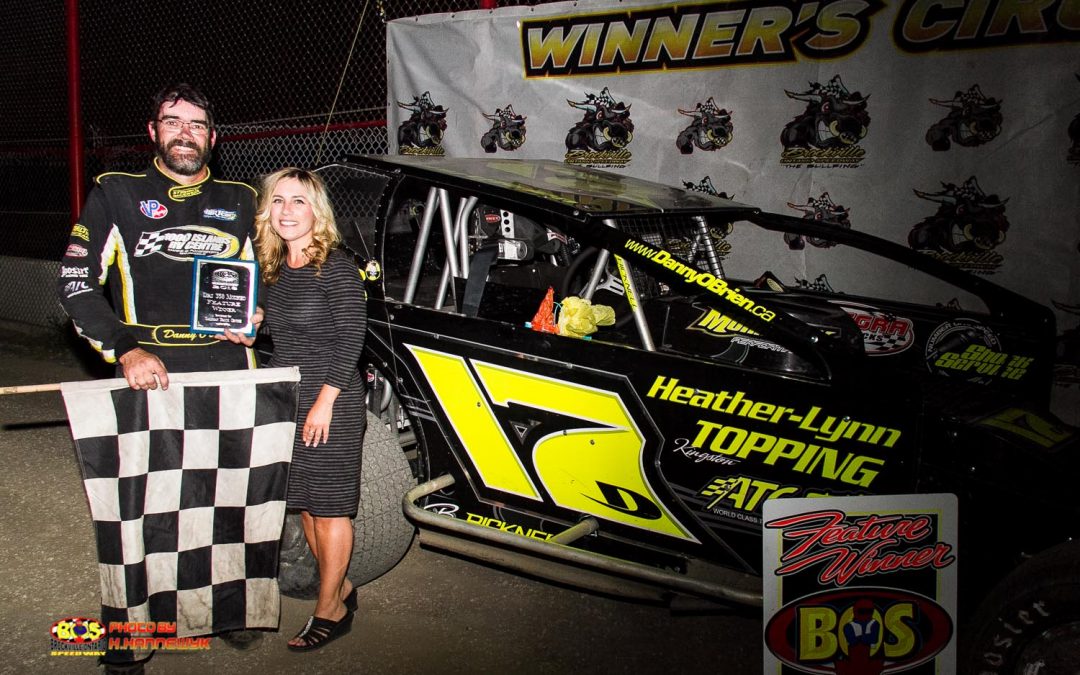 All 5 divisions were back in action this past Saturday night at the Brockville Ontario Speedway and the action was nonstop all night long. Come back wins and first time winners made for a special evening.

The 358 Modified division saw Aaron Pugh take the lead at the drop of the green flag with fellow Kingston Ontario native Andy Lloyd moving to 2nd with Chris Herbison, Luke Stewart and Adam Turner completing the top 5. Pugh had a great race car in the early going but Lloyd was able to keep the youngster in striking distance in the opening laps on a race track that saw multiple grooves on this night. By lap 11 Pugh had started to enter into lapped traffic which was helping Andy Lloyd as he reeled in the race leader. By lap 16 Pugh had cleared the traffic but behind the top 2 Jeremy LaSalle, Danny O’Brien and Chris Herbison were making their way forward and looking for the race lead. As for the lead battle Pugh was able to keep a steady advantage of 5 car lengths during this green flag run but Lloyd kept chipping away in 2nd while behind them Danny O’Brien charged by LaSalle to pick up 3rd and the battle was on. Roger Levesque lost the handle on his car in turn 1 on lap 24 bringing out the yellow and setting up a key restart which helped Danny O’Brien’s cause. When the green flew O’Brien went right to work moving to 2nd on lap 25 and then charged after the race leader while LaSalle and Herbison completed the top 5. On lap 27 Aaron Pugh made a small mistake in turn 2 allowing O’Brien to make the winning move to the inside lane down the back stretch and take the lead. From there it was smooth sailing for the 13 time Champion as Danny O’Brien notched his 2nd win in a row and 3rd of the season at Brockville. Aaron Pugh racked up his 2nd runner up effort of the year with Andy Lloyd crossing the line a solid 3rd over Jeremy LaSalle and Luke Whitteker.

The 25 lap Sportsman feature went an impressive green to checkered but that didn’t mean less excitement. Jarrett Herbison who was fresh off his first career Sportsman win at Can Am on Friday night, took over the lead at the drop of the green flag over Jesse Hudson, Ryan Scott, Johnathon Ferguson and Josh Kirkland. Herbison was fast in the early going but Ryan Scott was looking to take the lead as he moved to 2nd on lap 6. The top 2 drivers were running hard and putting on a great battle for the fans and even made a little contact at times. At the halfway point Ryan Scott had enough of 2nd as he moved by Herbison down the front stretch to take over the lead from Herbison while Johnathon Ferguson cleared Jesse Hudson to take the number 3 spot. With Scott in front comfortably the battle was on for 2nd as Ferguson patiently ran down Herbison and th 2 drivers battle for the remainder of the event while Hudson and Jason Shipclark completed the top 5. Without the caution being displayed it was impossible to catch the determined Ryan Scott as he dominated the 25 lap affair and scored his 2nd win of the season. Ferguson was able to get by Herbison for his 2nd runner up finish of the weekend, Jesse Hudson crossed in 4th and Tristan Draper went to a backup car and charged from 16th to complete the top 5 at the finish.

The Mini Stock division had a special 40 lap feature on this night at many invaders from other area race tracks were on hand. Marc Dagenais, the defending Cornwall Speedway Mini Stock Champion took the lead at the drop of the green flag and was dominant in the opening laps over Domonick Merkley, Dylan Kirkland, Terry Ladouceur and Logan Woods. On lap 8 the leaders entered into traffic which slowed the pace of Dagenais but not Merkley as he took over the lead and appeared to be headed to a dominant performance. On lap 9 his progress was halted as he experienced an electrical issue. This was the start of an epic comeback that was one for the history books. When the green flew Dagenais took the lead back over Ladouceur and Kirkland. With the race going green until halfway Marc Dagenais was able to pull away to a health advantage but behind the top 5 Domonick Merkley was making the comeback of the season, passing cars at will. On lap 20 Merkley had charged to 5th and at the same time the yellow flew as Karl Potvin skated off turn 2. When the green return Dagenais continued to lead but Ladouceur, Kirkland, Merkley and Dave Watchorn were right there to challenge. Merkley was not done passing cars either as he charged by Ladouceur for 3rd and then went to work on the top 2 drivers on lap 29. With 10 to go Dylan Kirkland made the move in traffic for the lead bringing Merkley to the runner up spot and the battle was on. Kirkland had the car to beat but on lap 37 something gave away on the front end in turn 2 ending his shot at a big win and handing the lead to Domonick Merkley. On the final restart Merkley would pull away easily and after leading early, slowing to a stop then rebounding to the lead late, Domonick Merkley put on the show of the season as he notched 2 in a row and 3rd on the year in Mini Stock. Marc Dagenais would finish up 2nd with Dave Watchorn charging to 3rd in a car that had a pavement set up, David Arbuthnot 4th and Jarod Galway crossed in 5th.

In Street Stock action Kyle Massey continues to turn heads as he took the lead at the start of the 15 lap affair over Sheldon Hoogwerf, Keith Riddell, Tyler Bushey and Brighton Speedway regular Justin Ramsey. The caution flew at the completion of lap 1 as Michael Dillon saw his chances at 3 wins in a row go away as he slowed with a flat right rear. On the restart Massey led the way but Tyler Bushey rocketed to the lead over Hoogwerf and Brighton regular Wade Purchase. As the laps began to click off Tyler Bushey started to open up a big lead on the field as behind him Justin Ramsey and Wade Purchase showcased their talents in a battle for 2nd and 3rd. At the halfway point Bushey was in full control with a straight away advantage while Ramsey continued to fight off Purchase for 3rd with Hoogwerf and Riddell completing the top 5. Without a caution in the final laps Tyler Bushey was set to auto pilot as he marched on to a dominant 4th win of the 2018 season in Street Stock. Wade Purchase saw his own personal Brockville winning streak stop at 3 with a runner up finish over Justin Ramsey, Sheldon Hoogwerf and Michael Dillon charged from the back to round out the top 5.

Rookie Sportsman has seen some great racing in 2018 and this night was no different. Jonah Lewis took over the lead early on and had a fast race car in the opening laps over Melissa Gifford and Gavin Riddell. On lap 3 Riddell and Gifford made slight contact causing Gifford to spin her car in turn 2. When the green flew Lewis was not phased at all as he held a comfortable lead over Riddell and Brock Cullen now making up the top 3. Having won Friday night in Novice Sportsman at Mohawk Gavin Riddell was looking for a weekend sweep but Lewis was able to open up the lead even more as the race started to close up. In the end. Jonah Lewis had a perfect night, and after 2 runner up efforts to start the season, would charge to his first ever Rookie Sportsman victory. Gavin Riddell held on for 2nd while Brock Cullen had another great run as he rounded out the top 3.

Next week the final leg of the Border Battle Series for the 358 Modified and Sportsman division takes place. The Modifieds will have 35 laps to determine who will claim the winners share of $2000 and the Sportsman will go 30 laps as well. Rookie Sportsman, Street Stock, Mini Stock and Outlaw Vintage will also join this big night of racing with 1000 Islands RV Center on hand as the evening sponsor. Racing begins at 7pm. 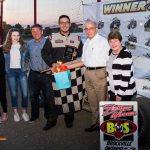 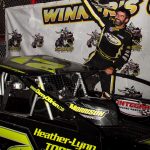 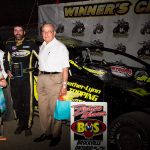 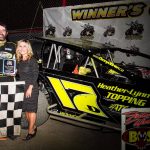 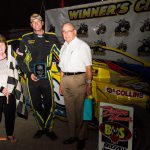 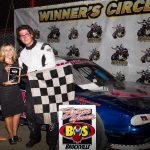 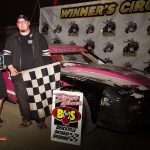