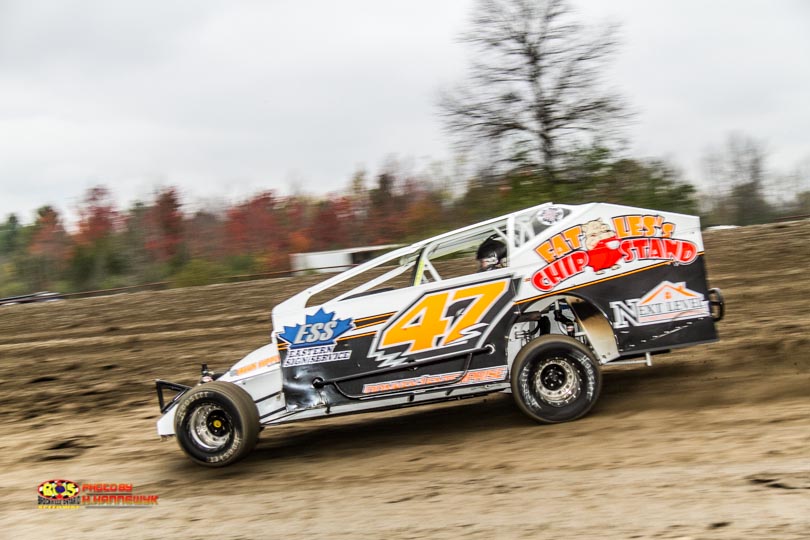 The 13th edition of the Dirt Outlaw Apparel King Edward Auto Parts Fall Nationals at the Brockville Ontario Speedway saw over 130 cars as the Ogilvie’s Auto and Fleet Triple Crown Series for the J and J Automotive 358 Modified and Sportsman divisions took center stage. The next to last round of the Action Sprint Tour was also in town and the popular Mini Stock division also were a part of the show. Despite threatening skies, the racing action did not disappoint.

The 60 lap Ogilvie’s Auto and Fleet Triple Crown Series for the 358 Modifieds took the green and Cornwall Ontario’s Corey Wheeler took the lead at the drop of the green flag over 2021 track champion Ryan Arbuthnot, Luke Whitteker, Gary Lindberg and Mario Clair. Wheeler was fresh off a pair of victories at the Cornwall Speedway last week and was running strong in the early laps as the rest of the field tried to keep pace. On lap 14-Wheeler entered lapped traffic which gave an opportunity for Arbuthnot and Whitteker tor try and close the gap but even with the heavy traffic, Wheeler was able to hold Arbuthnot and Whitteker at bay, to keep the lead. Behind the leader other drivers were also on the move. Carey Terrance and David Hebert were charging forward as they would break into the top 5 on lap 25 as Wheeler continued to remain up front and in control. On lap 38 the first yellow of the night flew when Brianna Ladouceur slid off the top side of turns three and four. When the green flew Wheeler and Arbuthnot remained up front with Luke Whitteker third while Terrance and Hebert were on the move. Both drivers were able to get into the top three but still had to run down the race leader. On lap 55 the final caution flew setting up one last chance to catch Corey Wheeler. When the green flew Wheeler was able to jump out front and grab a comfortable lead over Hebert and Terrance while Mario Clair and Ryan Arbuthnot tried to keep pace. In the end Corey Wheeler would finally break through for his first ever Brockville Speedway 358 Modified win and first Ogilvie’s Series victory. David Hebert, Carey Terrance, Mario Clair and Steve Bernier would complete the top 5. Ryan Arbuthnot would cross in 6th, good enough to secure his 2nd straight Ogilvie’s Triple Crown title.

The 50 lap Ogilvie’s Auto and Fleet Triple Crown for the J and J Automotive Sportsman division was ready for battle and Quebec star William Racine would take the lead at the drop of the green flag over Jarrett Herbison, Felix Roy, Brad Rouse and Cedric Gauvreau. Things did not go so good for 2021 track champion and Ogilvie’s Series point leader Bobby Herrington, as he broke his steering box which sent the car into traffic. Herrington was hit several times eventually coming to a stop in turn 2. The car was heavily damaged. With a fast race track Racine was able to hold a comfortable lead in the opening laps, while Herbison, Rouse and the others did what they could to stay in touch with the leader. Veteran Brad Rouse had a great car just past the halfway point of the event and began to move forward as he took the 2nd spot away and closed in on the race leader William Racine. On lap 35 Rouse would take the lead away and settle into the top spot as the laps clicked off. The Ogilvie’s Series title fight saw Jessica Power and Dylan Kirkland stage their war for the crown as Power remained in control as Kirkland tried to stay inside the top 10. In the closing laps Cedric Gauvreau would get by for 2nd and close in on Brad Rouse for the lead. On the final lap Gauvreau was close and heading into turn three the top two made slight contact, but Brad Rouse would hold on for his first Brockville Sportsman win. Cedric Gauvreau would cross in 2nd over William Racine, Felix Roy and Jessica Power, who was able to fend off Dylan Kirkland and edge out Bobby Herrington to claim her first ever Ogilvie’s Auto and Fleet Sportsman Triple Crown title.

The Mini Stock division was making their 8th appearance at the Dirt Outlaw Apparel/King Edward Auto Parts Fall Nationals and runner up in track points for 2021, Hayden Brown, would lead the way in the early going over Dominik Blais and Mathieu Voghell. Brown had the fastest car on the speedway as he pulled away quickly in the first few laps as Blais, Voghell, Jeremie Goyette and Brighton Speedway regular Tommy Bailey battled for top 5 positions. Brown was running strong and many wondered if he could be stopped. On lap 12 Mother Nature brought in a brief shower to help the field catch up. When the rain cleared and the field reassembled, the race went back to green and no change at the head of the field as Brown remained in control but Marc Dagenais was on his way forward as he moved to 2nd and tried his best to catch the leader. On lap 23 Dagenais was able to take over the lead in traffic and it appeared he was well on his way to his first Fall Nationals win. On lap 24 mechanical problems stopped any chance of a win, allowing Hayden Brown to return to the lead. In the final laps Hayden Brown would hold off all challenges from Jeremie Goyette claim his first Fall Nationals Mini Stock title in his Fall Nationals debut. Goyette would take 2nd with Kevin Sabourin 3rd, 2021 Cornwall champion Alexis Charbonneau 4th and Pierre Picard 5th.

As the 25 lap Action Sprint Tour/1000 Islands RV Crate Sprint Car feature rolled trackside, Mother Nature returned and this time she stayed for good. The 25 lap A main will be run over this weekend.

*Feature postponed due to inclement weather*