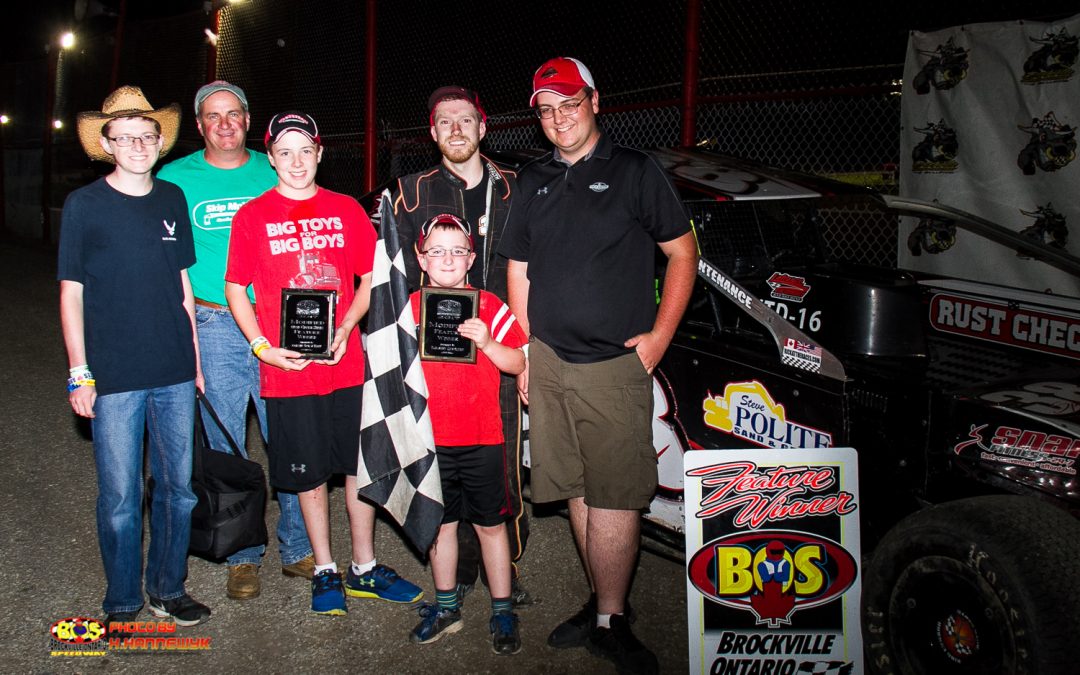 BROCKVILLE, ON – Luke Whitteker has won plenty of races and won at plenty of race tracks during his time as a 358 Modified driver but 1 track has been missing from his win list, The BOS. That all changed Saturday as he led all 50 laps for his first career Ogilvie’s 358 Modified Quad Crown Series win and first ever win at Brockville. Ryan Scott scored his first ever win in the Ogilvie’s Quad Crown Sportsman Series claiming the 40 lapper, Jared Zimbardi returned to victory lane in the Patriot Sprint Tour 25 lap event, Todd Raabe scored his first Street Stock win of the year while Dale Gifford and Dustin Bode notched wins in Rookie Sportsman and Mini Stock.

The 358 Modified feature saw Danny O’Brien and Luke Whitteker bring the field to green with Whitteker getting the advantage over Danny O’Brien, Brian McDonald, Kyle Dingwall and Bobby Herrington. The speedway was fast early on and with clear race track Whitteker was able to open up an 8 car length advantage on O’Brien with 8 laps in the books. On lap 9 Ryan Poole lost control of his car spinning in turn 2 bringing out the first yellow of the race. When the green flew Whitteker picked up where he left off and charged away once again over O’Brien, Dingwall, McDonald and Herrington. As the laps began to click off the leaders slowly headed into lapped traffic which proved to be no issue for Whitteker as he continued to increase his lead despite all the traffic. Danny O’Brien was searching around the speedway for a different line while behind him Kyle Dingwall was on his back bumper and looking for a way around. On lap 24 Jeremy LaSalle spun his machine in turn 4 bringing out the 2nd yellow of the night. When the green came out it was Whitteker again charging away while Dingwall made a bid for 2nd on Danny O’Brien but the 13 time champion held on to the runner up spot with Herrington and Mario Clair coming from 12th to round out the top 5. As the laps wound down Danny O’Brien started to reel in the leader and the chase was on. Whitteker was able to maintain the lead but knew O’Brien was on the charge and was doing all he could to drive away. On lap 46 the final yellow flew setting up a 4 lap dash to the checkered flag. On the final restart Whitteker charged into turn 1 with the lead while Danny O’Brien made a bid for the top spot but he slid up allowing Kyle Dingwall to slip by for 2nd. In the end Luke Whitteker was the class of the field and charged away to his first ever 358 Modified win at Brockville and 2nd overall this season having won at Cornwall on June. 4th. Dingwall scored 2nd with Danny O’Brien, Mario Clair and Brian McDonald rounding out the top 5.

In the Sportsman portion of the Ogilvie’s Quad Crown Series 2014 series champion Shane Pecore wasted no time jumping into the lead from the outside pole over Steve Barber, Ryan Scott, Dylan Evoy and Tristan Draper. Pecore would race out to nearly a straight away lead and looked to be the dominant car in the early laps. On lap 9 Mike Beyore looped his car in turn 2 bringing out the yellow for the first time. On the restart Ryan Scott decided it was his turn take over and he did just that taking the lead away with Steve Barber, Evoy and Johnathon Ferguson completing the top 5. Once in front Ryan Scott began to pull away and had the dominant car with Pecore, Barber, Evoy and Quebec invader Bryan Cloutier completing the top 5. From lap 15 to lap 17, 3 cautions would fly, first for Martin Hebert who slowed in turn 3, the 2nd for Patrick Picotin who slowed in turn 1 and then for Brianna Ladouceur who broke a front end while running 8th on lap 17. When the flurry of cautions was complete Ryan Scott still hung on to the lead with Evoy taking 2nd from Pecore while Barber and Cloutier were still at it for 4th and 5th. Scott was dominant on this night but Dylan Evoy was on the move and doing all he could to close in on the leader. On lap 31 everything was even as Kurtis Cayer slid off the speedway in turn 4 bringing out the final yellow. When the green flew Ryan Scott would flex his muscle leaving Evoy and the rest of the field in his dust as Ryan Scott continued his mid season dominance with his 3rd win of the year and 1st ever Ogilvie’s Quad Crown Sportsman Series win. Dylan Evoy, Shane Pecore, Steve Barber and Bryan Cloutier would round out the top 5.

The Patriot Sprint Tour was back for their 2nd and final appearance of the 2017 season. Jared Zimbardi was looking to add another win to his impressive resume as he led early on over Dylan Westbrook, Steve Poirier, Ryan Turner and Cory Turner. Zimbardi had a great car but Dylan Westbrook, who won at Merrittville with the Patriot Sprint Tour Canada Series, was all over the leader but couldn’t find his way by. On lap 15 Rick Wilson and dash winner Sammy Reakes spun on the front stretch bringing out the only caution of the race. Wilson was able to continue on but Reakes suffered major front end damage and was out of the race. When the green flew Zimbardi was able to pull away from Westbrook over the final 10 laps and would make it look easy as he cruised to his 5th overall win and first on the Canadian Series with the Patriot Sprint Tour. Westbrook came home 2nd with Steve Poirier, Cory Turner and Mitch Brown completing the top 5.

In the 15 lap Mini Stock feature Mark Packer led early on from his 3rd starting spot over John Lemarche, Jeff Humphrey, Melissa Gifford and last week’s winner Dylan Kirkland. Packer would lead the opening 5 laps before Humphrey took over the race lead and started to drive away. Dustin Bode was also on the move from 16th starting spot as he took over 2nd but had some work to do to run down the leader. That all changed with 5 to go as Humphrey broke the rear end on his ride ending a shot at victory. When the green flew Bode held the lead by Dylan Kirkland was right there to challenge. Kirkland would make several attempts to get by but it was not enough as Dustin Bode would march on to his 4th win of the year over Kirkland, Kurtis Daye, John Lemarche and Jeff Bode.

It was a rough start for the Street Stock division as on lap 2 both Ryan Brown and Kyle Massey both broke the rear axles on their cars ending their nights early. When the laps clicked off it was Keith Riddell leading the way over Nick Gauvreau, Todd Raabe, Sheldon Hoogwerf and Michael Dillon. Riddell was in search of his first career win but Gauvreau and Raabe weren’t making it easy as the made bids for the lead each lap. With 5 to go Raabe began to pick up the pace as he closed in on Riddell for the top spot. With 3 to go Raabe made the pass for the lead off turn 4 using the inside lane. On the final lap Riddell made a charge on the high side coming to the checkers but it was not enough as Todd Raabe scored his first win since 2015 in the Street Stock division. Riddell claimed his best ever finish of 2nd while Nick Gauverau, Sheldon Hoogwerf and Michael Dillon completed the top 5.

The Rookie Sportsman would go caution free in their 15 lap feature event. Dale Gifford would stay in front for the entire event and despite Dave McDonald and last week’s winner Joey Paquette making a late charge, Gifford would have just enough to score his first ever Rookie Sportsman win. McDonald crossed in 2nd over Paquette, Alex Gagnon and Geneva Sheffield.

Next week the Brockville Ontario Speedway Hall of Fame will induct 3 new members for the class of 2017. A full show is slated to roll plus the Outlaw Vintage Modifieds will be on the card as well. Racing begins at 7pm. 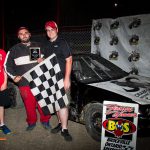 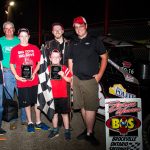 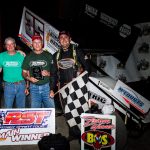 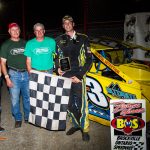 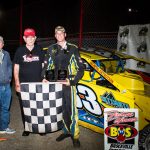 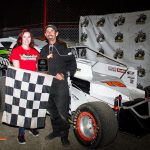 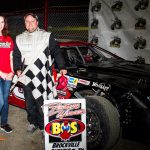