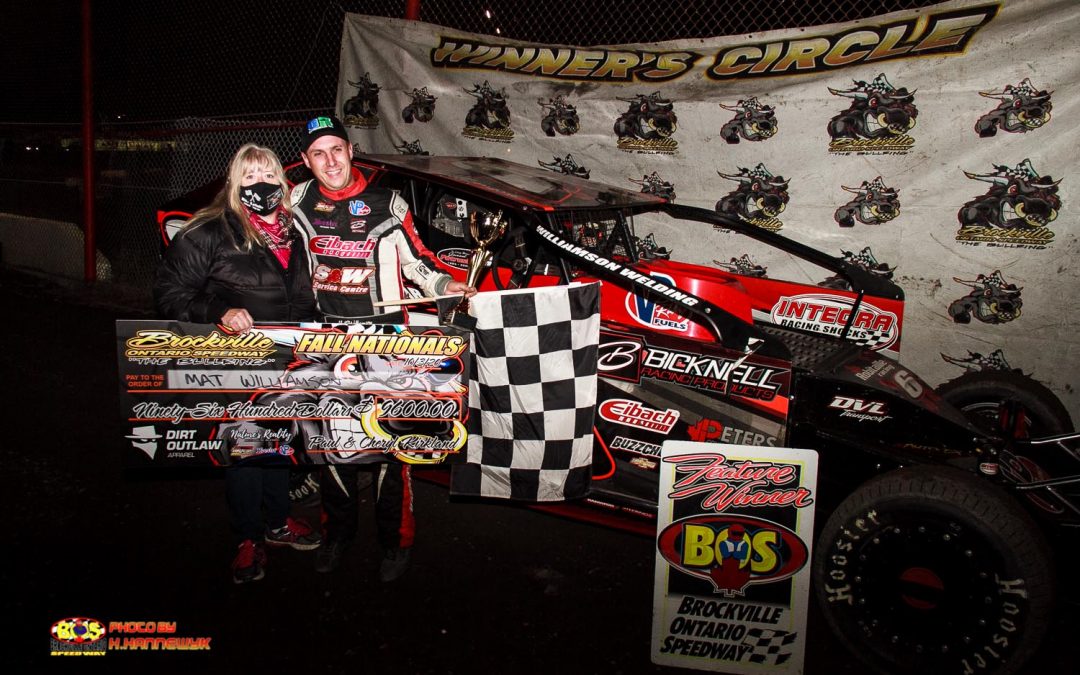 The night kicked off with the held over 25 lap Mini Stock feature saw Jarrod Galway charges to the lead in the early going over Dan Cook and Mark Packer. Galway was looking to join James Clarke as the only two-time winner and was firmly in control by over a straight away. On lap 13 the great run for Galway came to a halt with a flat tire. On the restart Brandon MacMillan would take over the lead from Dan Cook while Galway was on the charge from the back and headed to the front. Despite a late charge by Galway and Mark Packer it was not to be as Brandon MacMillan finally grabbed his first career Mini Stock win. Mark Packer would take 2nd with Jarrod Galway Dan Cook and Tyson Slinger completing the top 5.

The 96 lap Mike LaSalle Memorial for the 358 Modifieds saw a battle between Mike Bowman and Luke Whitteker in the early going with Kyle Dingwall Michael Parent and Mat Williamson giving chase. Whitteker had a strong car but dropped off the pace on the back stretch, and was pushed back to the pits under yellow. When the green flew Bowman showed the way but Mat Williamson was making a charge to the front as he took 2nd from Kyle Dingwall. From there it was a regular Saturday night Merrittville Speedway battle between Bowman and Williamson as the put on a show with Williamson taking the lead on lap 28. As Williamson led the other driver on the charge was defending race winner David Hebert, who made his way to the top 3 and was charging after Bowman for the 2nd spot. Hebert made the move to the runner up position by lap 48 but still had a lot of ground to make up on the leader as he used the extreme inside lane while leader Williamson worked traffic perfectly running around the top side. Several late race cautions slowed the event which put Hebert, Bowman, Dingwall and Chris Herbison within striking distance. On a lap 78 restart Williamson used the top of the speedway to take the lead and pull away from Hebert and Bowman one more time and appeared to be on his way to victory lane. As the laps wound down David Hebert closed in and narrowed the gap by 2 car lengths with 10 to go. As the leaders approached lapped traffic Hebert was looking to make his move but Williamson was able to use the lapped cars to his advantage to pull away from Hebert and head to the checkered flag. Mat Williamson had been shut out of victory lane in his few appearances in 2020, on this night he would return in a big way taking the $9600 pay day which, before the start of the green flag, saw an extra $400 dollars added by GR Environmental to the winner’s share making it an even $10,000 and his 2nd Fall Nationals win. David Hebert’s attempt at back to back Fall Nationals wins came up one spot short in 2nd with Mike Bowman, Kyle Dingwall and Steve Bernier completing the top 5.

The 50 lap Mike LaSalle Memorial Sportsman feature took to the speedway and Jessica Power was looking for the weekend sweep after winning the held over feature on Friday night. Power took the lead over Johnathon Ferguson Gabriel Cyr Even Racine and Jarrett Herbison. The Kingston native held a comfortable lead in the opening laps running the bottom but Ferguson showed how fast the outside lane was as he took over the lead on lap 9 with Power and Racine left to battle for 2nd and 3rd. With Ferguson in control Even Racine made his way to 2nd and began to quickly close in on the leader and the Granby champion was on the move and looking for the lead. At the halfway point Ferguson was able to keep the top spot as behind the Power and Herbison battled for the number three spot with Scott McGill moving into the picture in 5th. Power and Herbsion made slight contact in turn 4 while battling for third allowing McGill to moved by and drive away as he looked to close in on the race leaders. On lap 36 the great run and a shot at victory came to an end for Even Racine as he slowed with a problem. On the restart Ferguson had a new challenger in the form of Gabriel Cyr who was on the move after getting by Scott McGill for second and the battle was on. Despite a late charge by Cyr, Johnathon Ferguson was not to be denied as he became the first driver since Chris Herbison to win back to back Fall Nationals Sportsman races. Cyr crossed 2nd over Scott McGill, Cedric Gauvreau, who rallied from an early spin to finish 4th with Jessica Power completing the top 5.

The Action Sprint Tour featuring the 1000 Islands RV Crate Sprint Cars was full of action and a few tense moments in the 20-lap event as well. Right at the start coming the down the front straight away a scary 4 car tangle occurred as Rob Neely, Adrian Stahle, Jordan Hill and Eric Gledhill al flipped hard sending the field of 26 cars scattering to avoid. Amazingly all driver were able to walk away from the wreck unharmed. The 2nd green flag flew and Jesse Costa took over the lead and would pull away in the opening 3 laps before another red flag flew for DJ Christie, who rolled his car in turn 2. Christie would climb out unhurt as well. When the race went back green Costa continued to lead over Darren Dryden while Rick Wilson moved to third and was on the charge to catch the leaders by lap 6. On lap 7 another scary moment took place as Dale Curran spun on the front straight away and Brett Strattford had no place to go and slammed into the side of Curran’s car while Brian Nanticoke flipped into the infield. Nanticoke would be ok as he climbed out along with Brett Strattford, however the red flag remained out for an extended period of time as Curran had to be extricated from the car. Due to injuries suffered in the accident Curran was taken to hospital no further updates are available at the time of this release. When the green flew once again it was Costa in control over Dryden and Wilson as they pulled away from the field. Costa and Dryden were able to put some distance between themselves and Wilson and were closing quickly on lapped traffic. On lap 13 the red was back out as Dave McKnight tangled with Jacob Dykstra sending McKnight airborne in turn 1 pirouetting several times and amazingly did not get upside down. McKnight and Dykstra would be ok but they were done for the night. When the green flew Jesse Costa would pull out to a comfortable lead over Dryden and Wilson Allan Downey and Johnny Miller. Downey would find the fast line in the closing laps and would take 3rd from Wilson but that was as far he got as Jesse Costa held on for his first Brockville win over Darren Dryden Allen Downey Rick Wilson and Johnny Miller.

The Quebec Lightning Sprints also saw a first-time winner in their 12th event of the 2020 season and their first ever appearance at Brockville. Much like the Action Sprint Tour, this race began with a four-car flip in turn one off the initial green flag. All drivers were able to climb out un hurt but an extensive clean up delayed the start of the 20-lap event. When the green flew Yves Girard led the way over Maxime Foley Jeffrey Weare Tomy Moreau and Michael Benoit. Girard had a fast race car and was pulling away from the field and looked to be on his way to his first win. As the laps wound down and no cautions Maxime Foley was able close in and make it close but Yves Girard would not be phased by the late charge as he drove a perfect race to score his first win of 2020 over Foley, Weare, Moreau and Benoit.

Continuing with the red flag theme the start of the 20 lap Street Stock feature saw Kacey Huffman lose control on the opening lap flipping several times in turn 3. Huffman was able to climb out un injured. Several yellow flags slowed the event at the beginning but it had no affect on Adam Turner as he led the way over Justin Ramsay Austin Reid and Todd Raabe. Turner nearly swept both Vintage and Street Stock events the previous night and was in control of the race but Todd Raabe was on the move as he charged to 2nd around Ramsay and set his sights on Turner for the race lead. Raabe would close quickly as Turner stayed on the bottom of the speedway as the laps clicked off. Heading into turn three on the final lap Todd Raabe drove his car deep into the corner but would run out of time. After winning the Vintage Modified feature Friday night, Adam Turner would become the third driver in Fall Nationals history to win in two different classes in the same weekend joining Danny Johnson and Erick Rudolph, taking the 20 lap Street Stock event over Raabe, Justin Ramsay Austin Reid and Tyler French.

Sebastien Beauregard would lead the early laps of the 20 lap Mini Stock event with Tommy Bailey and defending race winner Alexis Charbonneau. Bailey would take over the lead and appeared to be headed for victory. Just past the halfway point Alexis Charbonneau had problems as he collected an infield tire in turn 2 but was able to continue on and make an epic charge from the back of the field. Bailey would continue to lead the way but Sebastien Beauregard and James Clarke were giving him all he could handle. On lap 13 Tommy Bailey’s run came to an end in turn 4 ending his chance at victory. On the final restart James Clarke tried at will to get by Beauregard while Charbonneau was right there to challenge making it a three-car battle. Clark would get by off turn 4 with three laps to go and march on to his 3rd win of the season and his first at the Fall Nationals. Beauregard crossed in 2nd followed by Charbonneau, Marc Andre Voyer and Christopher Cordeau.

The 12th edition of the Dirt Outlaw Apparel Fall Nationals presented by Natures Reality Botanical Blends, Hoosier Racing Tire and VP Racing Fuel was full of action and excitement and the staff and management want to thank everyone who made this event possible. Thanks to the Drivers, teams, sponsors and most importantly, you the race fans for sticking with us through tough times and making the most out of very memorable 2020 racing season. 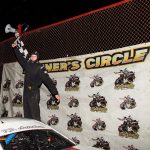 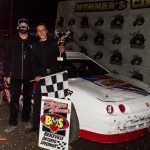 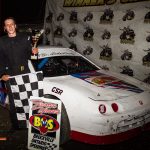 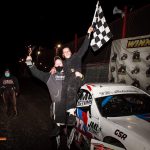 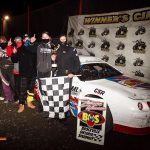 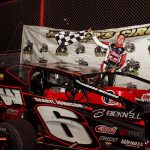 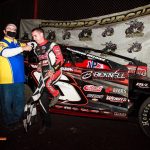 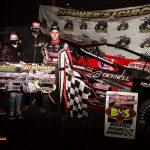 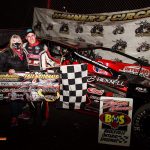 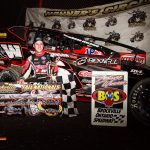 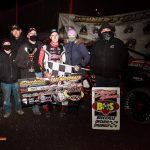 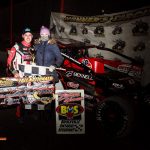 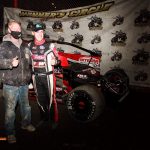 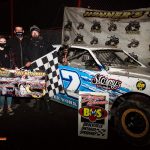 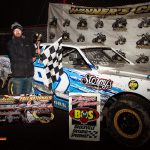 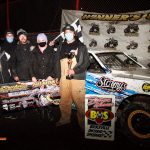 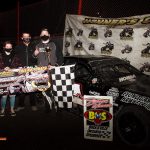 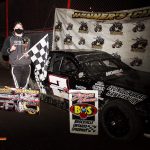 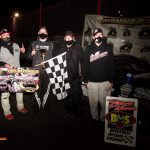 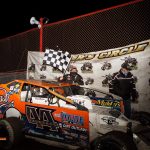 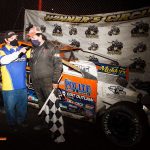 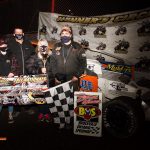 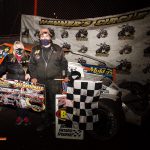 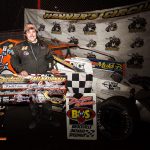 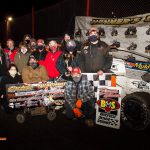