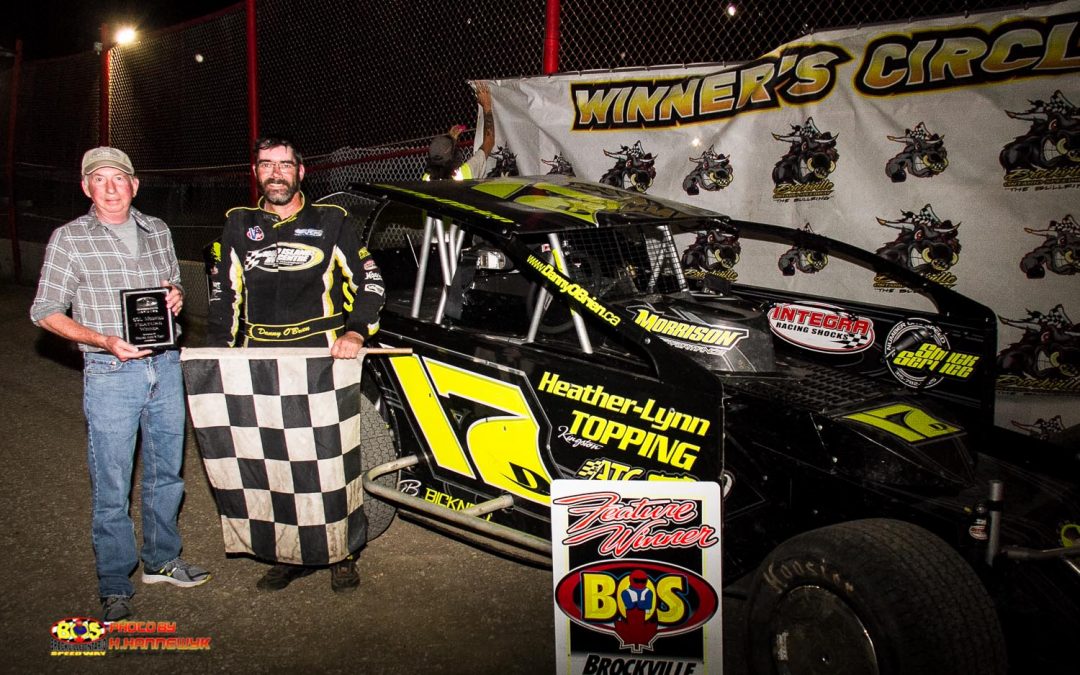 BROCKVILLE, ONT – There was not any other way to describe the weather this past Saturday night at the Brockville Ontario Speedway other than hot. The racing action was just as intense with the 2nd leg of the Ogilvie’s Triple Crown Series for the 358 Modified and Sportsman on hand. With a fast multi groove race track drivers had many options, but one goal in mind, getting to victory lane.

The 358 Modified portion of the Ogilvie’s Auto and Fleet Triple Crown Series saw Chris Herbison jump out to the early race lead over Kyle DIngwall, Luke Whitteker, Ryan Arbuthnot and Brian Rogers. With a fast outside lane Herbison immediately jumped up on top and began to stretch the lead out but Kyle Dingwall was equally as fast and kept the leader within striking distance. At lap 10 Herbison continued his great run but the top 5 driver were close on the track as Dingwall, Arbuthnot, Whitteker and Steve Bernard were all over each other and looking to get to the lead. O lap 21 the caution flew at Steve Bilow looped his car in turns 1 and 2, he would return to the tail of the pack for the next restart. When the green flew it was Dingwall who took over the top spot as Herbison slipped to 2nd and was quickly under attack from Ryan Arbuthnot for that position while Whitteker and Bernard continued to complete the top 5. Dingwall started to open up his lead over the field but in the mean time Steve Bernard was starting to make some noise on the race track. Bernard got by Herbison for 3rd as the early leader began to slide back at the halfway point. The night got worse on lap 26 for Herbison as he jumped the cushion in turn 1 and spun off the top side of the speedway and the yellow flew. With 30 laps compete in the 50 lap event the racing began to pick up as Kyle Dingwall Ryan Arbuthnot, Mario Clair and Steve Bernard were swapping lanes positions and the occasional paint color as well with no driver gaining an edge. One driver who was gaining and edge was Danny O’Brien. After a struggle in his heat earlier O’Brien charged from 16th starting spot to the number 6 spot on lap 36 and joined the 5 car battle in front of him. At the front Dingwall was doing all he could as Ryan Arbuthnot and Steve Bernard were trying everything to get by but the man who won 2 weeks ago was not going to give up the lead easily. On lap 40 Bernard made his move forward taking 2nd from Arbuthnot but Arbuthnot’s night would come to an end as he misjudged the cushion in turn 1 and slid off the track and the caution flew. He would return to finish 13th. By this time Danny O’Brien had worked his way to 3rd and was on the charge at the green flag taking 2nd fro Steve Bernard as he slid off the back stretch. in an effort to get back on the track he overshot turn 4 and nearly hit the wall and another yellow flew on lap 45. This caution proved to be just what Danny O’Brien needed when the field went back green. Dingwall did all he could to hold him back but O’Brien charged to the outside lane in turn 2 and took over the lead. From there Danny O’Brien took his brand new Bicknell chassis from near the back all the way to victory lane for the 2nd time this year. Dingwall ran a great race to come home 2nd with Mario Clair Jeremy LaSalle and Brian Rogers.

The 40 lap Sportsman portion of the Ogilvie’s Triple Crown started off with a 4 car pileup in turn 4 which included Dale Gifford, Jason Cummings and Joey Paquette. When the green flew it was Ryan Scott taking the lead from the pole position over Shane Pecore, Gabe Cyr, Evan Racine and Tristan Draper. The battle was intense in the early laps of the event as Pecore made several attempts using the bottom lane to get by but Scott was up to the challenge and remained in full control of the race. On lap 10 the handling appeared to go away just a little it on Ryan Scott’s race car which proved to help Pecore. On lap 12 Scott slipped up the track in turn 4 allowing Pecore to take over the lead and begin to pull away from a quality field. The track was fast and with Pecore out to a near straightaway lead the battle was on behind them as Ryan Scot Gabe Cyr Evan Racine and Tristan Draper were having a spirited battle for position in the top 5. By the halfway point Pecore remained in command and was having no issues getting through the traffic but Ryan Scott was not having a easy of a time which allowed Cyr, Racine and Draper to close the gap. On lap 26 the caution flew for Jamie Young who spun in turns 3 and 4. When the green flag flew Pecore charged out from but the real battle was behind him as Evan Racine started to charge forward taking 3rd from Cyr, then ran down Ryan Scott for 2nd. On lap 29 Jarrett Herbison Brad Winters and Jason Shipclark spun in turn 3 and 4 bringing out another yellow. When the green came back out Evan Racine went right to work as he took over 2nd from Ryan Scott but still had a long way to catch Pecore. That would all change on lap 37 as Jarrett Herbison and Alex Gagnon tangled on the back stretch and the caution flew. On the final restart Pecore took the lead but Evan Racine was charging on the top side and looking for the lead. Despite the efforts of Evan Racine, Shane Pecore proved to be too much for everyone as he notched his 3rd win of the season and 4th career Ogilvie’s Series win. Evan Racine claimed a solid runner up finish over Ryan Scott, Tristan Draper and Xavier Andrews who claimed the 1000 Island Cargo Trailers Hard Charger award coming from 12th to complete the top 5.

The Rookie Sportsman 15 lap event saw Melissa Gifford jump into the lead over Xavier Perrin and 3 time winner Brock Cullen. Gifford held a comfortable lead in the opening 5 laps and looked well on her way to claiming her first ever win. On lap 5 the caution flew setting up a key restart for Xavier Perrin. On the restart Gifford took the lead but Perrin was on the move as he took the lead on lap 6 and began to pull away from the field. Perrin looked well in control as behind him Brock Cullen was on the charge taking 2nd from Melissa Gifford and began his march to try and take over the lead. On lap 11 Gorden Clair spun to the inside of turn 1 and the caution flew. When the final green flag flew Perrin moved out to a 3 car length lead over Cullen and Gifford. After many karting wins and a frustrating start to the season, Xavier Perrin finally got it all together to score his first ever Rookie Sportsman win and celebrated with an epic rooftop dance in victory lane. Brock Cullen crossed in 2nd while Melissa Gifford came home with a career best 3rd place finish.

The Street Stock division continues to impress during the early parts of the 2018 season and this night was no different. Steve Brady had done some serious wrenching on his race car during the week and looked in fine form as he took the lead and was a dominant force in the opening 5 laps over Sheldon Hoogwerf, Nick Gauvreau, Michael Dillon and Tyler Bushey. Brady had a great car and was looking to end the race early but the caution flew on lap 6 for Nick Gauvreau who slowed in turn 2. On the restart it was all Brady at the front of the field but behind him Michael Dillon and Tyler Bushey were making a charge forward as they too 2nd and 3rd just before halfway and began to put on a show. With 5 laps remaining the night that appeared to be a potential first ever win for Steve Brady ended as he slowed on the front stretch, handing the lead to Tyler Bushey. On the restart it was Michael Dillon making a run at the defending champ for the lead and would take over the top spot using the top lane on lap 12. After 3 runner up finishes and win 2 weeks ago, Michael Dillon was able to hold on and score his 2nd in a row in the Street Stock ranks. Bushey came home a close 2nd with Sheldon Hoogwerf taking 3rd, new comer Nick Merkley had a great 4th place effort while Kyle Massey scored another top 5 finish taking the 5th spot.

The popular Mini Stock division was set for 15 laps and after an opening day win Dominic Merkley was looking to return to victory lane as he took the lead early on over Brandon Henderson, Richard Bartholomew, Mark Packer and Jarod Galway. Merkley and Henderson had the 2 fastest cars on the track and were looking to settle the race amongst themselves. Behind them defending track champion Dylan Kirkland was on the move after early race problems as he made his way to the front taking the 3rd spot away from Bartholomew just past halfway and was looking to run down the leader. Over the final laps Brandon Henderson would make it close but it was not to be as Dominick Merkley would end a near month and a half drought to score his 2nd Mini Stock win of the year over Brandon Henderson, Dylan Kirkland, Jarod Galway and Samantha Henderson.

The Outlaw Vintage division saw an incredible battle for the race lead between Wayne Riddell, Kenny Polite and Cory Winters. Riddell was the early pace setter but Winters was right there to challenge through the early laps of the race. Kenny Polite who won 2 weeks ago was planning his strategy from the 3rd spot and the battle was on. Winters was able to get by Riddell off turn 4 just before halfway but Wayne Riddell refused to back down as the top 2 traded the lead and a bit of paint as well. On lap 9 the intense battle ended in turn 2 as Riddell and WInters came together forcing Riddell around in turn 2. On the restart Kenny Polite was tired of following everyone and wanted the lead. He would take that away from Winters on lap 12 and despite a side by side battle with Winters on the final lap, Kenny Polite was not to be denied as he scored his 2nd straight Outlaw Vintage win at Brockville. Winters crossed a close 2nd over Pete Stapper Matt Barbour and Wayne Riddell who charged from last to complete the top 5.

Next week action continues in all 5 classes at The BOS with a full program plus the Quebec Mod Lite division will also join the card. The first Green flag flies at 7pm. 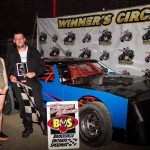 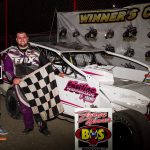 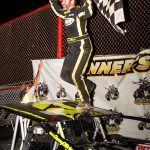 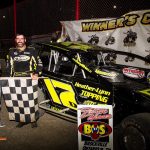 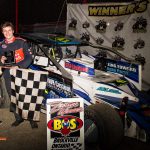 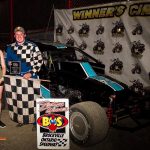 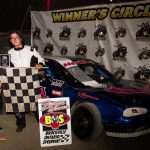