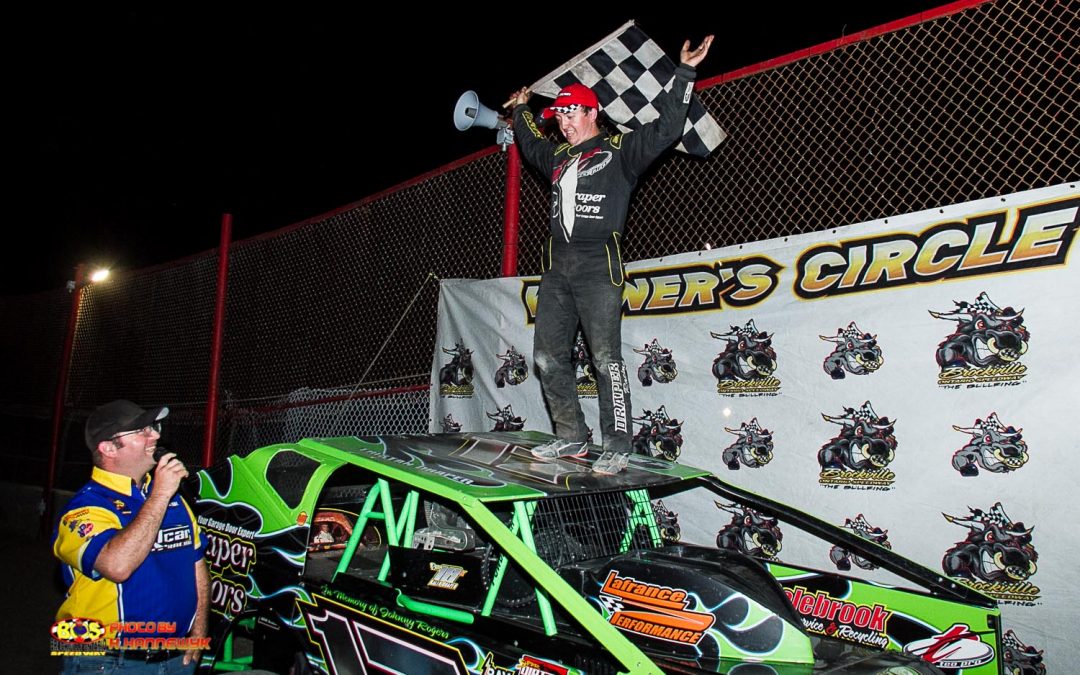 BROCKVILLE, ON – Despite hot temperatures the drivers at the Brockville Ontario Speedway were ready and so were the fans as the Patriot Sprint Tour joined an already full card on Saturday night and there was plenty of action in all 6 events.

In the Patriot Sprint Tour 25 lap event on Tackaberry Construction night it was Jared Zimbardi racing out to the lead early on over Chris Jones, Jordan Poirier, Steve Poirier and Paulie Colagiovanni. With a fast race track Zimbardi was able to pull away to a comfortable advantage in the opening 10 laps while behind him Jordan and Steve Poirier made their way to 2nd and 3rd and were having a spirited battle for the runner up spot. On lap 13 the first caution flew as Rick Wilson slowed in turn 2. When the green return it was Zimbardi once again out in front by 5 car lengths but Steve Poirier was trying at will to stay with the leader over his nephew Jordan Poirier, Chris Jones and Mark Smith made his way to the top 5. With 5 laps to go the top 3 were all nose to tail and working traffic perfectly and it was a matter of who would be the first driver to make a mistake. After a season that has been tough to start for his standards, Jared Zimbardi would hold off all challengers and score his first Patriot Sprint Tour win of 2019. Steve Poirier would make it close but settled for second over nephew Jordan Poirier, Chris Jones and Paulie Colagiovanni.

Luke Stewart would pace the 1000 Islands RV 358 Modified field in the opening laps with Joe Banks, Tristan Draper, Tim O’Brien and Ryan Arbuthnot giving chase. Stewart had a great car in the opening laps and was searching for his first Brockville win but Tristan Draper, a 358 Modified rookie, was on the charge as he took 2nd away from Banks on lap 7 then ran down the race leader. After a short battle at the front the first caution would fly for Joe Banks as smoke began to show out of his car. He would be pushed back to the pits done for the night. When the green flew, Tristan Draper took over command with Stewart now 2nd and Tim O’Brien charging into the third spot. From this point forward Tristan Draper looked like he had been racing a modified for 30 years as he made consistent laps time after time, pulling away to well over a straight away advantage at the half way point, but current points leader Ryan Arbuthnot was on the move. Last week’s winner took 2nd from Stewart but still had some work to do to run down Draper for the lead. On lap 25 Luke Stewart saw a great run end in a hurry as he slid off the top side of turns three and four. On the final restart Tristan Draper would jump out to a 5-car length lead and would not be denied on this night, as he marched to a dominant first career 1000 Islands RV 358 Modified win. Ryan Arbuthnot would hold off a fast closing Chris Herbison for 2nd with Tim O’Brien and Kyle Dingwall completing the top 5.

In Sportsman action Melissa Gifford had shown the guys how it was done in qualifying heat racing earlier in the night as she took the lead at the drop of the green flag over Shane Stearns, Dave Wilgosh, Xavier Perrin and Jarrett Herbison. The yellow however would fly quickly as Jonah Lewis would make hard contact with the wall sending him to the pits for the night. When the green flew Shane Stearns would take over the point bringing Xavier Perrin to the number two spot with Dan Ferguson, Jason Shipclark and Melissa Gifford completing the top 5. Stearns had only one win in his Sportsman career and was determined to get his 2nd but Johnathon Ferguson was on the move from his 10th starting spot. After making his way to 2nd before halfway, the caution would fly as Jarrett Herbison, who was fresh off a big win at Can Am the night earlier, would blow a right rear tire. When the green returned the battle was on as Johnathon Ferguson would make a run at Shane Stearns. After a brief battle Ferguson would claim the lead on lap 18 while Xavier Perrin continued his great run in the third spot. A two-car spin on lap 19 in turns 3 and 4 would give Stearns one last shot at the leader. When the green flew for the final time Johnathon Ferguson would not be phased as he pulled out to a comfortable lead and did not look back. For the man from Prescott, it was his 2nd win of the 2019 season in the Sportsman ranks at Brockville. Last week’s winner Ryan Scott had early race troubles but made a big charge to take 2nd at the line over Shane Stearns, Jason Shipclark and Xavier Andrews.

Two-time Street Stock winner Michael Dillon would take command of the 15-lap even on lap number 4 with Shawn Hodge and Keith Riddell completing the top 3. Dillon was charging hard in the early laps but Keith Riddell would make a run as he took 2nd away from Hodge on lap 8, then ran down the race leader. A great side by side battle ensued as each driver took turns at the top and bottom of the speedway leaving fans wondering who would get the edge. On the final lap heading into turn three and four, Keith Riddell would make a big move on the high lane but it was not meant to be on this night. Michael Dillon proved to bee too strong as he scored his 2nd straight and third on the year over Riddell and Shawn Hodge.

Draper Doors Rookie Sportsman were on track for 15 laps and after a few early- race struggles it was former Outlaw Vintage driver Justin Saunders taking the lead on lap 5 over Terry McClelland and last week’s winner Dylan Kirkland. With a fast track everyone saw the fast way was on the bottom and Saunders was going to make everyone take the high road if they wanted the lead. Kirkland was ready to challenge as he took 2nd on lap 11 and then ran down the leader. Over the final four laps Justin Saunders would stay smooth and consistent and would not be detoured by last week’s winner. After several successful outings in the Vintage class, Justin Saunders would march on to score his first ever Rookie Sportsman feature win at Brockville. Kirkland, although strong on this night, would cross in 2nd and Terry McClelland, who won earlier this year, would complete the podium.

Jamie Larocque was looking to make it three first time winners on this evening as he led the way in the Mini Stock 15 lap event over Hayden Brown and Justin Leroux. With a fast car all season Larocque was having issues putting a full race together and Hayden Brown was also looking for similar results. Despite late challenges from Brown and Leroux, Jamie Larocque would not back down from anyone as he would drive on to score his first career Mini Stock feature win on this night. Hayden Brown would make it close but settled for a runner up finish while Justin Leroux completed the top 3.

Next week a full show of 1000 Islands RV 358 Modifieds, Sportsman, Draper Doors Rookie Sportsman, Street Stocks and Outlaw Vintage will complete the month of July. Racing gets underway at 7pm. For more information on points, results and news happening at the speedway, check out our website at brockvillespeedway.com. Don’t forget to follow us on our Facebook, Twitter and our new Instagram page for more of what’s happening at “The BOS”. 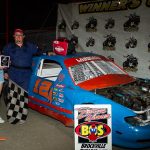 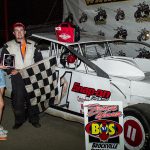 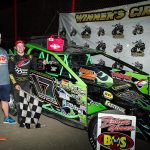 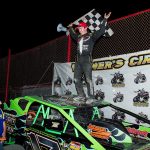 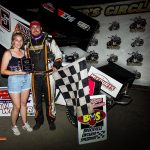 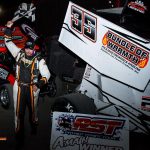 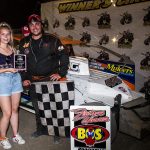 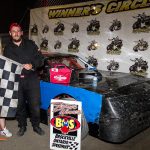