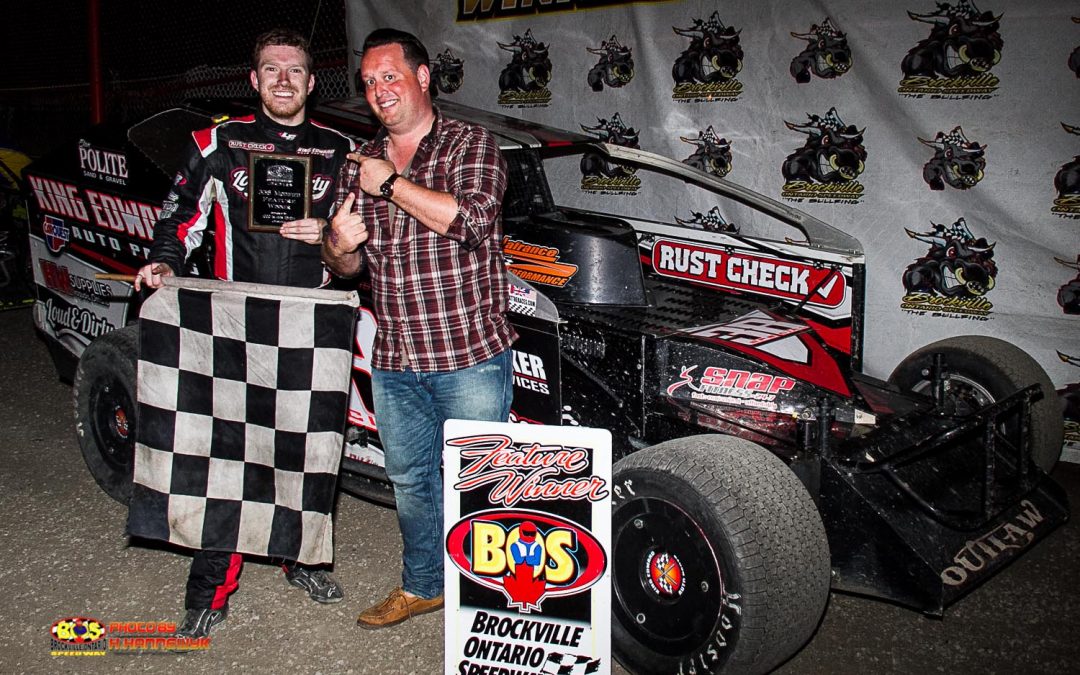 BROCKVILLE, ONT – t was a busy night at the Brockville Ontario Speedway and evening sponsor 1000 Islands Toyota with track championships on the line and drivers who had not won in 2018, looking to get to victory lane and with time running out drivers were up on the wheel every lap.

The night started off with racing action from August 25th for the Street Stock and Mini Stock divisions. In the August 25th Street Stock feature Sheldon Hoogwerf led the way early on over Todd Raabe, Michael Dillon Bruno Richard and Nick Gauvreau. It had been over 3 months since Hoogwerf went to the winners circle but Bruno Richard was also looking to win his 2nd of the year and made a charge to the front. After a hard fought battle with Todd Raabe for 2nd Richard closed in on Hoogwerf for the lead with 7 laps left. On lap 10 Richard finally was able to get by and it appeared Hoogwerf was going to settle for another 2nd place effort. At the checkered flag Richard crossed the line as the winner but due to a technical infraction at the scales, Sheldon Hoogwerf would be declared the winner for a 2nd time in 2018 over Nick Gauvreau, Michael Dillon, Tyler Bushey and Keith Riddell. In the 15 lap night cap Nick Gauvreau was looking to put motor troubles throughout the year behind him as he took over and was dominant throughout the entire 15 lap feature event with Sheldon Hoogwerf giving chase from 2nd. With a track title on the line Tyler Bushey was taking a more conservative route as he held on to a spot towards the back part of the top 10 which proved to be a smart decision. Near the half way point a multi car tangle involved several cars in the back part of the top 5 including 2nd place points man Michael Dillon. In the closing laps Nick Gauvreau stayed in control and up front and had a fast race car. At the checkers it was Gauvreau taking the victory over Hoogwerf with Steve Brady crossing in 3rd. Tyler Bushey finished 9th, good enough to claim his 2nd straight title.

In the held over Mini Stock feature from August 25th and it was Mark Packer taking his car to the front of the field in the 15 lap event over Richard Bartholomew and Cornwall Speedway invader Marc Dagenais. With a fast race track at the start of the night it played right into the hands of Dagenais as he took over the lead on a lap 7 restart and started to put on a dominant performance. Behind the leader points leader Domonick Merkley was just trying to get through the first race and have a chance to run for the title in the night cap as he held a comfortable 2nd spot but Joe McNichols was on the charge as he used the outside lane to take over the 2nd spot but had over a straightaway to run down the race leader. At the checkered flag Dagenais was on cruise control as he charged to his first ever Brockville Mini Stock win. Joe McNichols crossed in 2nd with another Cornwall invader Justin Jodin coming home in position number 3. In the Night cap Richard Bartholomew was once again at the front of the field and was looking to finally get his first ever win but Mark Packer and Domonick Merkley were also on the charge and looking to claim a win. Marc Dagenais was also on the move charging to 3rd but Joe McNichols was flying to the front and eventually go to 2nd on lap 6. One lap later he took over the lead from Bartholomew and began to pull away over Merkley and Dagenais. After a runner up effort in the first feature Joe McNichols used his Fall Nationals test session wisely and scored his first win of the season with Domonick Merkley crossing in 2nd, which was good enough to lock up his first title in his first full time season. Dagenais held on for 3rd while Brandon Henderson and Richard Bartholomew completed the top 5.

The 358 Modified track title was already locked up as Danny O’Brien clinched his 14th track championship 1 week ago but he knew another feature win was on the line. Multi time Mini Stock champion Corbin Millar surprised all the top stars in the 358 Modified feature as he took the lead early on over Luke Stewart, Steve Barber, Joe Banks and Luke Whitteker. On lap 2 the struggles continued on the weekend for Jeremy LaSalle as he slowed to s top in turn 2. On the restart Stewart tried at will to take over the lead but Millar remained up to the challenge and remained in front. Off turn 2 a multi car crash in turn 2 involved several top stars as Danny O’Brien, Kyle Dingwall, Ryan Arbuthnot and Ryan Poole all came together in turn 2. Dingwall, Poole and Arbuthnot were able to make repairs and return while O’Brien broke a shock tower which put him out of contention for a possible 7th win of the season. When the green flew Luke Stewart took over the lead and looked to be in prime form to take his first Brockville win but behind him the late season run for Luke Whitteker was still going as he charged to the 2nd spot on lap 10 as Steve Barber, Steve Bernard and Chris Herbison completed the top 5. On lap12 Whitteker took command but Steve Bernard was on the move as he charged for 2nd and tried to run down the leader. A unique line by both drivers showed their versatility as both Whitteker and Bernard ran the extreme outside lane in turns 1 and 2 and right against the infield tires in turns 3 and 4. With 10 to go Whitteker was slowly pulling away as Bernard tried to keep pace over Barber, Arbuthnot and Stewart completed the top 5. As the laps clicked off Luke Whitteker continued to get faster which was not good news for the rest of the field. In the end Luke Whitteker turned in a dominant performance as he marched to his 3rd win of the season and 2nd in the last 3 weeks. Steve Bernard charged from his 13th starting spot to finish 2nd with Ryan Arbuthnot, Kyle Dingwall and Chris Herbison who rallied from early race problems to finish 5th.

A special 20 lap All Star race was held which feature winners from Brockville, Cornwall, Mohawk and Can-Am Speedways in 2018. Aaron Pugh took the lead at the drop of the green flag but after a top 5 effort in the 30 lap feature Herbison was looking for a little redemption as he took the top spot away on lap 4 bringing Danny O’Brien to 2nd. The top 2 drivers battled hard for the lead but Herbison was able to draw away by 5 car lengths as behind them Steve Bernard was also on the move taking the number 3 spot. At halfway Danny O’Brien changed his line which proved effective as he started to run down the leader with Bernard close by in the 3rd spot, but that would quickly change. Heading into turn 3 Bernard got too high in turn 3 and slid off the speedway in turn 4 ending his shot at victory. Over the remaining laps Herbison was able to hold off the now 14 time champion as he marched on to claim the $2000 winners share in the All Star Challenge over Danny O’Brien and Ryan Arbuthnot.

The Sportsman 25 lap event had an intense title battle with Johnathon Ferguson Ryan Scott and Tristan Draper separated by 25 points which made things even more intense on the speedway. In the opening laps Josh Kirkland was looking to put a season of bad luck behind him as he led the opening 4 laps over Tyler Reynolds, Shane Stearns, Dale Gifford and Xavier Andrews. On lap 4 Jason Cumming lost the handle on his machine as he spun in turn 2. On the restart Tyler Reynolds took over the lead but the man on the move was Johnathon Ferguson as he charged to 2nd and quickly closed in on the leader. Ferguson would take over the lead just past halfway and was doing what he needed to do do to win the race and the title. Ryan Scott and Tristan Draper were having their own struggles on the night as they fought handling and traffic all evening. With Ferguson in front Scott needed a 7th place finish to clinch the title but Jason Shipclark and Jesse Hudson were not making that easy as they battled to try and improve their night and get to the front of the field. As the laps clicked off Ferguson remained in front while Xavier Andrews and rising Quebec star Even Racine charged into 3rd and was closing in on Xavier Andrews for 2nd. With only 1 caution slowing the final laps it was not enough to stop Johnathon Ferguson on this night as he marched to his division leading 4th win of the season over Xavier Andrews, Even Racine, Shane Stearns and Tyler Reynolds. Title contender Tristan Draper had a night he would rather forget as heat race problems relegated him to a backup car, which resulted in handling issues which landed him 13th at the checkered flag. Ryan Scott somehow managed to hang on to 7th to claim his first ever Sportsman track title over Johnathon Ferguson.

The Rookie Sportsman division had a tight points battle as only 10 points separated Xavier Perrin and Brock Cullen in the chase for the title and with no heat points taken, the gloves were off and the battle was on. When the green flew it was Jonah Lewis powering into the lead over Melissa Gifford and Xavier Perrin. Lewis was not worried at all about points, just a possible 3rd win of the season as he charged away in the early laps but behind them Perrin and Cullen were battling hard for 3rd and 4th with Michel Fournier right with them in 5th. Cullen was able to break free of traffic and run down the leader as Lewis experienced handling issues. On lap 6 Cullen took the lead but Xavier Perrin was in jeopardy of possibly losing the title with Michel Fournier challenging for 3rd by halfway. As the laps clicked off Cullen continued to stretch out the lead over Melissa Gifford and without a caution flag Gifford and the rest had no chance of catching Brock Cullen as he notched an impressive 7th win of the season with Melissa Gifford taking another 2nd place finish, Xavier Perrin was able to hold off Michel Fournier which was good enough to claim the 2018 Rookie Sportsman championship.

With the 2018 regular season in the books and track champions crowned, the race teams can take it easy for the next month before things pick up again. The BOS will sit silent until Sunday September 16th for the annual Monster Enduro beginning at 1pm. Friday October 12th and Saturday October 13th will be the final event for 2018 as the 10th annual Loud and Dirty Fall Nationals hits the speedway. Full schedules of events, camping and ticket prices are available on our website at brockvillespeedway.com. For up to the minute information about the enduro and Fall Nationals, be sure to stayed tuned to the speedway Facebook and Twitter pages. 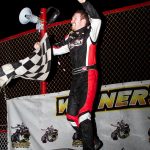 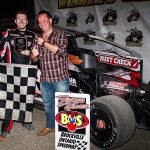 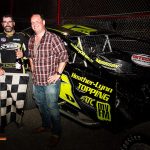 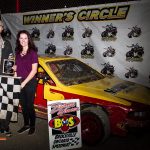 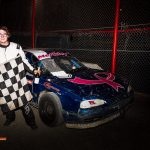 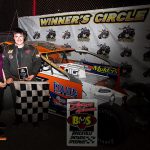 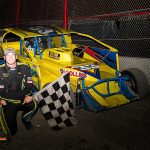 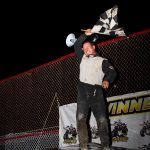 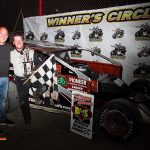 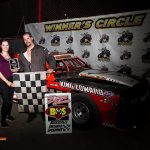 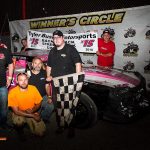 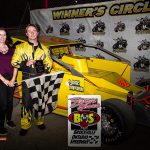 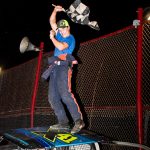