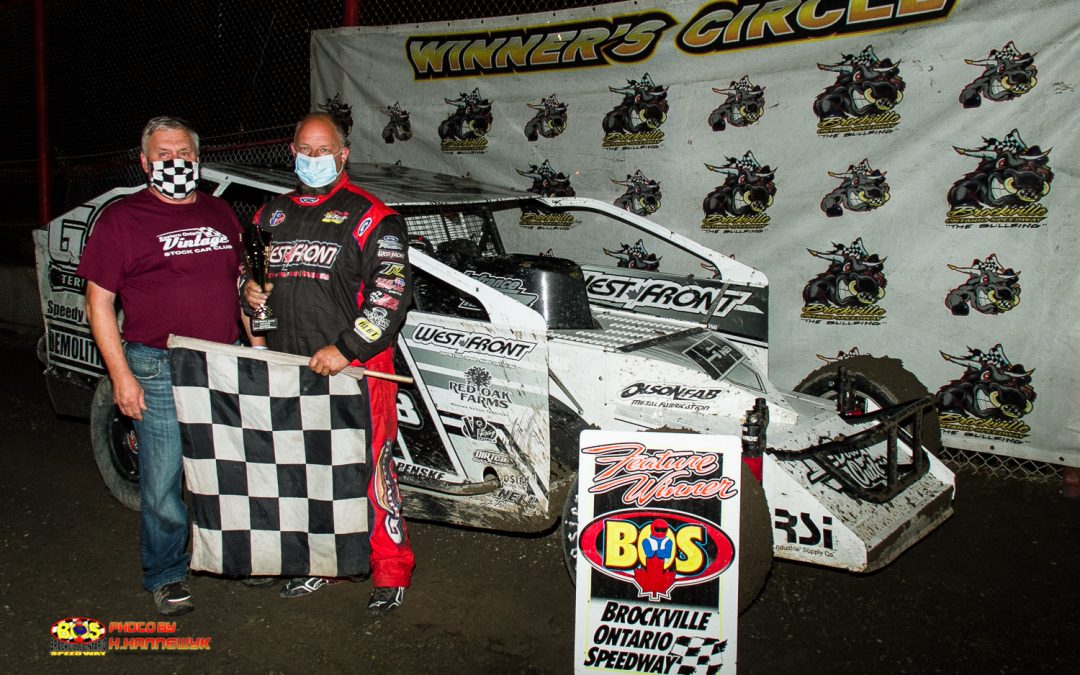 After a heavy shower fell across the Brockville Ontario Speedway during the mid afternoon, many thought it was going to be an early night and maybe an evening spent in the house. Despite the afternoon showers and threatening skies throughout the night, the Brockville Ontario Speedway crew managed to get a full card of 7 divisions plus double Vintage features in the record books on Steve Polite Sand and Gravel night.

The held over 20 lap event from July 24th for the Vintage division took to the speedway first and veteran Randy Gaudet wasted no time getting to the front of the field over Josh Powers, Steve Billings, Brandon Gregory and Chad Lackie. The top two drivers, Gaudet and Power, put on a great battle for the lead with Steve Billings close behind in third. The only way these three drivers were going to be stopped was by a caution and that’s exactly what happened on lap 8 as Rick Grundy and Pat Charland tangled on the front stretch. On the restart Gaudet got away on the tacky surface and pulled away from Powers and Billings. Despite lapped cars Randy Gaudet was not to be denied as he scored the win over Josh Powers, Steve Billings, Brandon Gregory and Chad Lackie

Brennan Moore had a great run going at the start of the 15 lap Novice Sportsman feature with Tristan Ladouceur giving chase. The top two were the class of the field on the fast track with Greg Brinklow, Mario Dupuis and Holly Denard trying their best to keep pace with the leaders. After a spirited battle on lap 7 it all came to an end for Moore, as him and Ladouceur made slight contact in traffic, resulting in a broken front end. On the restart Ladouceur continued to lead but now Greg Brinklow was on the charge and looking for his first ever win. Despite a late race restart Tristan Ladouceur was not phased as he ran to his first ever Brockville win to go with his Novice win at Cornwall this season. Brinklow scored a career best 2nd while Justin Cyr, Jordan Wood and Mario Dupuis completing the top 5.

Brock Cullen was looking to find the magic he had during his opening day win as he led the 20 lap Street Stock feature with Sylvain Gauthier right there to challenge in the opening laps. The top two drivers had a great battle through the first 10 laps and managed to put nearly a half track between themselves and third place Shawn Hodge, who was having a solid evening. As the laps clicked off quickly Brock Cullen started to stretch the advantage over Gauthier with Todd Raabe coming from last to 3rd, getting by Hodge with three laps to go. In the end nobody had anything for Brock Cullen as he cruised to his 2nd Street Stock win of the year. Gauthier scored a Brockville best 2nd over Todd Raabe, Shawn Hodge and veteran Gilles Mongeon.

August 31st of 2019 was the last time Hayden Brown was in George Tackaberry Boulevard at The BOS and he looked strong at the start of the 20 lap Mini Stock event on this night as he led early over Frank Belair, Jarrod Galway, Tyson Slinger and Skylar Ladouceur. With the leader checking out on everyone, Jarrod Galway, Frank Belair and Dan Cook, who rebounded after troubles in turns 1 and 2 early on, put on a great battle for position with Galway getting the 2nd spot from Belair, but had a major mountain to climb in order to catch Hayden Brown. On lap 10 a quick yellow flew giving the rest of the drivers the shot they needed. On the restart Brown proved to be too much as he pulled away leaving Galway and Cook to battle for the runner-up spot. On this night Hayden Brown would end the nearly two-year drought along with terrible 2021 luck, to score his first win of the year with Galway collecting his 4th straight runner up finish. Dan Cook, Tyson Slinger and Matt Boal rounded out the top 5.

It has been a great start to the season for Cornwall Ontario’s Brian McDonald and it had also had been nearly 7 years since he last visited victory lane in the J and J Automotive 358 Modified division at Brockville. He showed his muscle early on in the 30-lap contest, as he took the lead using his favorite outside lane, over Lee Ladouceur, Chris Herbison, Johnathon Ferguson and Ryan Arbuthnot. The Cornwall native was strong and showed the field he meant business as he pulled away to a big lead as Ladouceur tried at will to keep pace. In the meantime, Ryan Arbuthnot was cutting through the field as he got by both Herbison and Ferguson to get to third, but had a long way to go to catch the top 2 drivers. McDonald was on cruise control and it looked as if he would cruise to an easy win as he led by well over a straight away, but on lap 27 the caution flew as 5th place Tristan Draper made heavy contact with an infield tire in turn one, ending his solid night. On the final restart Brian McDonald was able to break away from the field and for the first time since June 15th of 2013, would roll into victory lane at Brockville. Lee Ladouceur finished a strong second over Ryan Arbuthnot, Johnathon Ferguson and last week’s winner Kyle Dingwall.

Matt Billings has been on a roll in the 1000 Islands RV Crate Sprint Car division recently. After winning the opener on July 3rd, Billings wasted no time grabbing the lead at the drop of the green flag of the 20-lap event, with Dave McKnight, Bryan Cloutier, Rick Wilson and Ryan Poole making up the top 5 spots early on. Billings was flying around the top side of the speedway and showed no signs of slowing down as behind him, Cloutier and McKnight put on a fantastic show for the number two spot. Cloutier would take over 2nd but was going to need some help to try and catch Billings. With 5 to go Billings would enter into traffic but the Brockville native was perfect on this night, as he made it through the slower cars with no issue. At the end of it all Matt Billings would go unchallenged scoring a dominant win, his 2nd of the season, over Bryan Cloutier, Dave McKnight, Rick Wilson and Ryan Poole.

Jarrett Herbison has been searching for speed in the J an J Automotive Sportsman division and on this night he had it going as he charged to the lead at the drop of the green over Jessica Power, Bobby Herrington, Gabriel Cyr and Shane Stearns. Herbison was cruising around the high lane in the opening laps of the 25-lap event, but points leader Bobby Herrington was on the move taking 2nd from Power and quickly closing in on Jarrett Herbison by lap 10. The top three drivers put on a great show for the fans as they worked through traffic. Herrington would make his move for the lead just past the halfway off turn two and begin another dominant performance. Herrington began to make his was through the traffic while Power tried her best to get around Herbison for the second spot with Cyr and Stearns trying to keep pace in 4th and 5th. With a few laps remaining Herrington made slight contact with a lapped car resulting in a broken right front shock tower, but it never slowed his progress. Bobby Herrington would once again use skill and on this night, a little bit of luck to remain perfect, claiming his 4th win in a row at Brockville. Jarrett Herbison would hold on for 2nd with Jessica Power scoring 3rd, along with her 10th consecutive top 5 finish over the last two seasons. Gabriel Cyr and Ricky Thompson charged to 5th at the checkers.

The 20-lap night cap for the Vintage proved to be an epic battle and one of the best races of the night. Randy Gaudet led early but Josh Powers and Steve Billings were right there to challenge in the opening laps. As the top three put on a great battle, Brandon Gregory and Tim Hegarty also started to close in making it a five-car battle for position. Gaudet and Powers began to pull away and worked traffic for the remainder of the event while Brandon Gregory, Steve Billings and Tim Hegarty continued their great battle for position. In the closing laps Josh Powers made several attempts on the high lane and would pull even with Gaudet on the final lap. The top two raced wheel to wheel as they worked the final turns. Off of turn 4 Josh Powers would pull alongside and by inches, would score his first Vintage win of the year over Randy Gaudet, Steve Billings, Tim Hegarty and Chad Lackie.

Next week RYCON Electrical will be on hand for another great racing program at The BOS, the 1000 Islands RV Crate Sprint Cars have the night off. To pre-book tickets and to find out further information head to the speedway website at brockvillespeedway.com. For instant news at the track, be sure to follow us on Facebook, Twitter and Instagram. 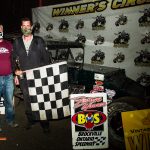 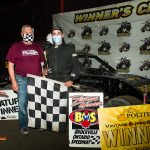 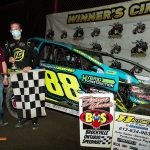 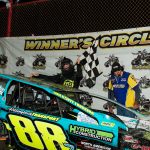 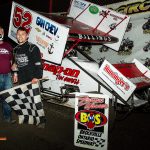 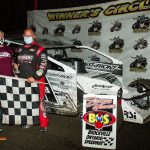 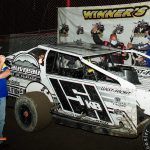 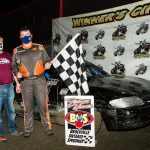 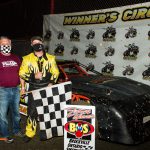 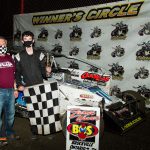 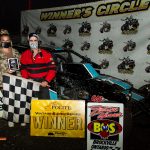